‘It’s insane that we’re the only ones still playing’: Belarus top-flight star expresses concern at league’s refusal to shut its doors during the coronavirus pandemic and accuses them of ‘acting like this isn’t a big deal’ despite over 60,000 deaths

And still they play on. Football around the world has long since hung up its dusty boots in its attempts to starve the coronavirus yet one league remains standing, stubbornly kicking balls through the rising death toll.

The Belarus Premier League, or the Vysheyshaya Liga to give it its official title, remains the only competition in Europe — and fourth in the world alongside Nicaragua, Burundi, and Tajikistan — not to have shut its doors in the face of the pandemic.

‘Frankly not comprehendible,’ is how FIFPro, the world players’ union, secretary Jonas Baer-Hoffmann described their refusal to put it on hold. 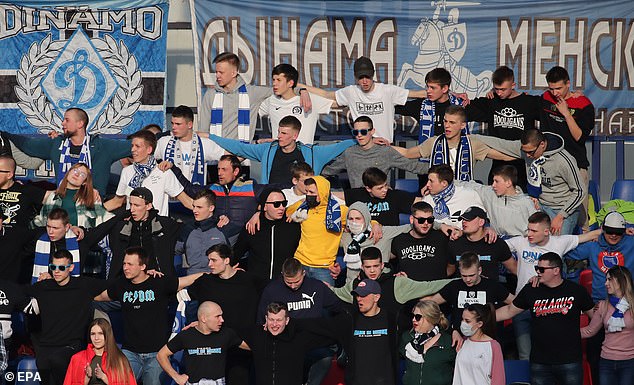 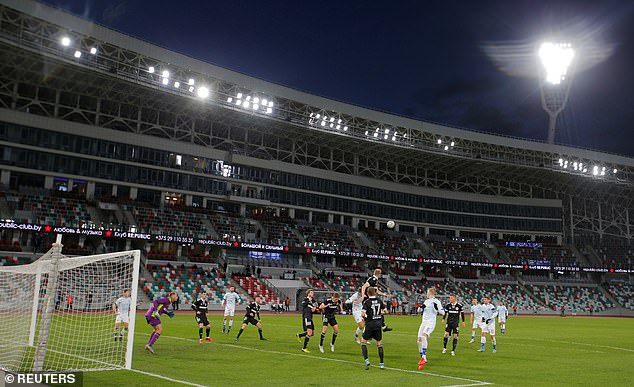 Is it really any surprise when the country’s own president Alexander Lukashenko scoffed at the coronavirus as a “frenzy and psychosis” and prescribed a healthy dose of the sauna and 100ml of vodka to keep at bay the disease which has so far killed more than 60,000 people.

So, on they go. This weekend all 16 teams will play their third game of the season. On Saturday, FC Shakhtyor Soligorsk were held to a goalless draw by Neman and BATE beat Rukh Brest 1-0.

How much longer can it really go on? Belarus had their first coronavirus-related death this week, too, with the passing of 75-year-old actor Viktor Dashkevich.

‘It is insane that we are the only ones who are playing,’ FC Minsk forward Ognjen Rolovic told Sportsmail. 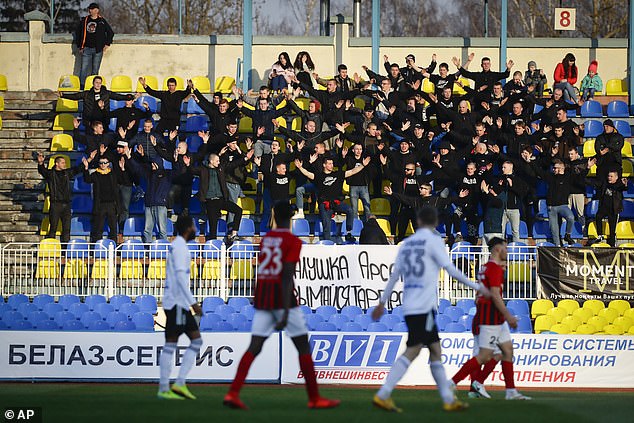 There are no social restrictions in place in Belarus, with the public only advised to wash hands

‘They are acting here like it is not a big deal, that we should not be afraid. There is a strange mentality that if you are scared of the situation then you are not a man.

Rolovic is from Montenegro and one of the few English speakers in the division. In his home country, where he has a girlfriend and an 11-month-old daughter, no one is allowed out after 7pm or at weekends. In Belarus, there are no social restrictions, just the usual advice to wash your hands and avoid contact. Everywhere except the football field it seems.

‘It is difficult to concentrate on football,’ says Rolovic. ‘You don’t know where the other players were, who they were in touch with.

‘You are under contract and you can’t say I am not playing or training and then you have your family at home saying please take care of yourself. You are caught between two fires.’

Rolovic is not a lone voice. ‘I think if the players could vote, I think 90 per cent would say that we should stop training and finish,’ he says.

Brazilian defender Joao William, who plays for FC Rukh Brest admitted in an interview with Belarusian website Tribuna that he hoped the league would be suspended. ‘I am slightly frightened,’ he said.

The Belarus FA insist that they have not had a single club tell them they are not willing to play. ‘A lot of players are in contact with the media but the opinions differ and everyone has their own opinion,’ BFF spokesman Aleksander Aleinik told Sportsmail. ‘Some players are more concerned, others are less concerned but in the first two match days and we did not have a case that a player refused to play or left the club’s camp.’ 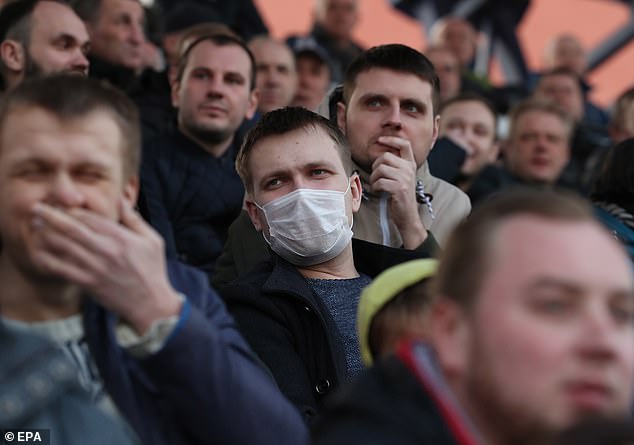 Yet on FC Neman Grodno’s own website they have run an interview with their St Petersburg full-back Andrey Vasiljev with the headline, translated from Russian, ‘There are players here who are categorically against the continuation of the championship’.

‘It is a very scary thing because people are dying,’ he says. ‘People are dying. Personally, my opinion is this. If all sports tournaments have already been suspended all over the world, you need to think three times whether we should continue to play.’

At the top, there does appear a willingness now to relent if the situation escalates. A couple of weeks ago that the BFF chairman declared there was ‘no critical situation’. This weekend, all fans at games will have their temperature taken before entering the ground. Hand sanitisers will be placed around stadiums. Fans have been urged to sit certain distance apart. ‘Like a chessboard,’ explains Aleinik. ‘It might be difficult but this is what we are trying to apply.

‘We are following the situation on a daily basis based on information from the Ministries for of Health and Sport. If it gets worse the corresponding action will be taken.’

Some clubs have taken action into their own hands. Neman’s own Ultras have called on fellow clubs’ fans not to attend matches and saying they believe ‘someone is lying to us’. 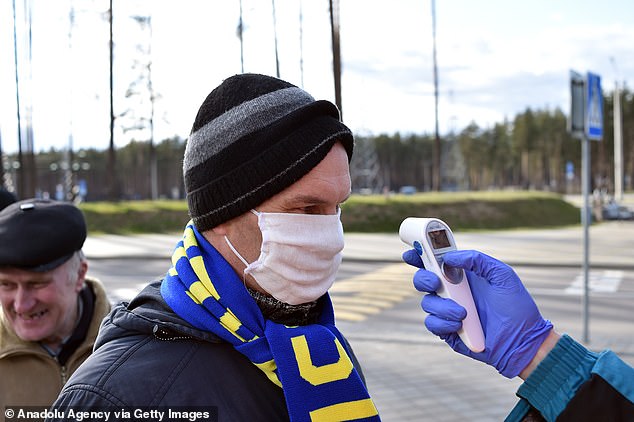 The players of Rukh Brest wore T-shirts ahead of their game against BATE Borisov which announced ‘We are playing for the world’.

While Belarus’s decision to play on has raised concerned eyebrows, it has also directed fresh global eyes on to a league that has never enjoyed so much attention. The league has signed 10 broadcast deals in countries across Europe.

FC Slutsk, who have gained a huge new following thanks to how provocatively their name translates, have even set up a crowd-funding page to accept donations in four currencies, including US dollars and Euro, to help raise much-needed sponsorship in return for signed merchandise.

‘I want to play because now we are one of the few competitions, which people can watch and take pleasure in this difficult situation in the world,’ Slutsk striker Artem Serdyuk told Sportsmail. ‘I feel safe because of all the measures taken by our club. We have antiseptic and masks, we try to be at home all day, except training and matches. I think our safety is in our hands.

Rolovic added: ‘Sometimes, I feel that maybe we are a bit lucky because everyone is now watching us and we can show ourselves. And then sometimes you think, Jesus, the virus is everywhere and we are the only ones playing and exposed to these things. From the other end, you feel like you are a bit scared.’