Report and highlights from the Sky Bet Championship clash between Birmingham and Stoke City at St Andrew’s as Lukas Jutkiewicz’s double steered the Blues towards an important win in their battle to beat the drop.

The 32-year-old striker’s brace made it 10 points in five games under the former Charlton manager since he replaced Aitor Karanka.

Victory gave Birmingham their third successive home win for the first time since October 2019, while a third straight clean sheet was a first for them in just over three years.

Stoke’s slump continued as they made it six defeats in their last 10 games. 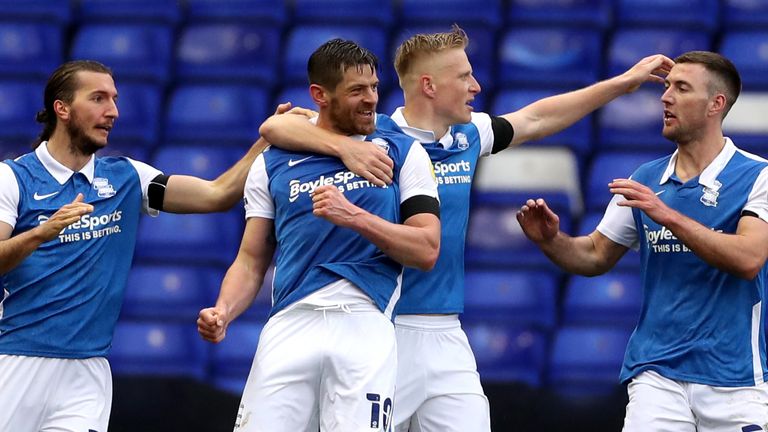 But until Blues broke the deadlock three minutes before half-time, it was Michael O’Neill’s side who looked the more likely scorers with the hosts having to defend for long periods.

Injury-hit Stoke, who were without 11 players, were gifted the first chance.

But Stoke returned to the attack and with Blues poor in possession, began to assert some control on the game.

John Obi Mikel blazed over from 15 yards from a loose ball when Blues failed to clear another Thompson corner following a header at the far post.

Then Blues – and captain Harlee Dean in particular – breathed a sigh of relief in the 28th minute when Stoke had an effort ruled out.

The skipper was dispossessed on halfway and Fletcher stabbed home Jacob Brown’s cross only to be flagged offside.

Blues punished them by taking the lead against the run of play, with a variation of a regular set-piece straight off the training ground.

Marc Roberts lined up for a trademark long throw-in only to hurl it short to Maxime Colin, who touched it back to the defender and his first-time curling cross was headed home powerfully by Jutkiewicz.

The burly striker made it 2-0 in the 53rd minute with his second goal of the game, rifling home the rebound after goalkeeper Adam Davies, diving low to his left, failed to hold a 25-yard curling effort from half-time substitute Riley McGree.

It was the striker’s third goal in three home games and it completed a half century for the club in the league in his 203rd game for them in the competition.

Blues could have had added to their tally but the clean-through Jonathan Leko took an extra touch and was dispossessed instead of squaring to the unmarked McGree 10 yards out, then Ivan Sunjic drilled just wide.