Bournemouth 2-0 Aston Villa: Jefferson Lerma and Kieffer Moore give the Cherries an excellent start to life back in the Premier League – as Steven Gerrard’s visitors struggle on the south coast

It’s been a fairytale summer for Kieffer Moore, who completed a remarkable personal journey to fire Bournemouth to a dream start back in the Premier League.

Ten years ago this week, he was beginning an arduous campaign with Truro City down in English football’s sixth tier, while earning his keep as a part-time lifeguard at a local pool. 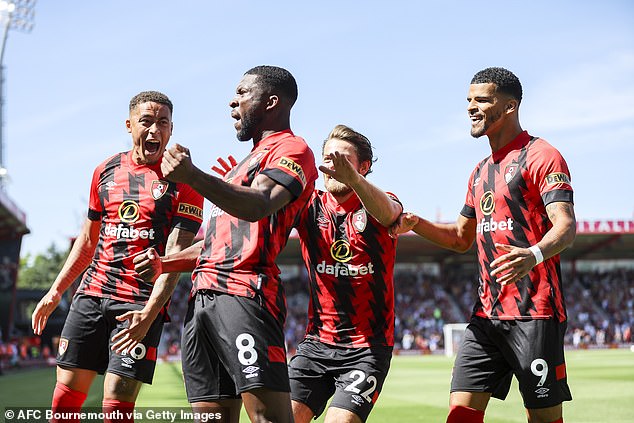 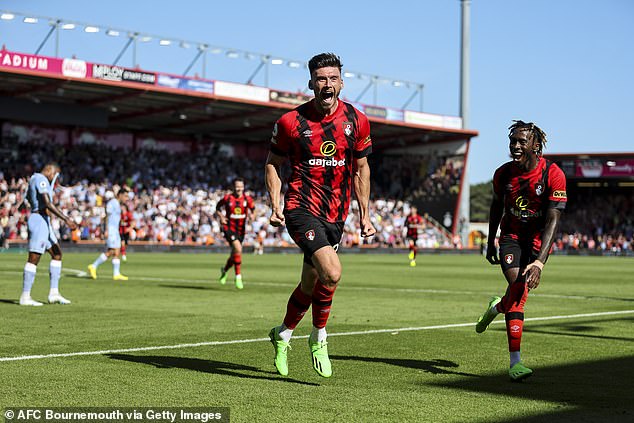 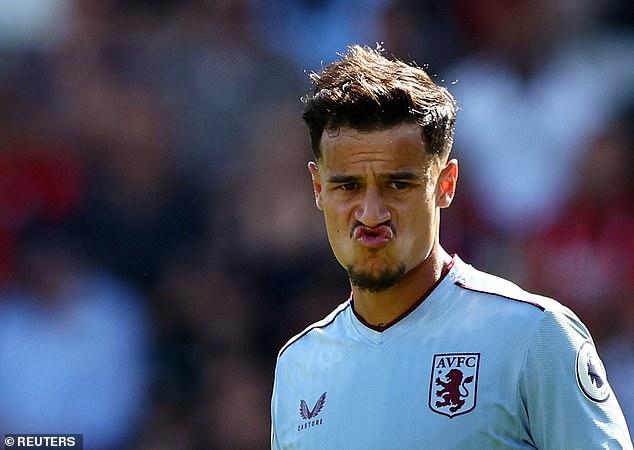 So it’s fair to say his start to life in the best league in the world began swimmingly, his late header confirming a pleasing three points for Scott Parker’s Cherries.

It came nearly 80 minutes after Jefferson Lerma had opened the scoring, as Bournemouth put in a superbly balanced performance to swat aside Steven Gerrard’s big-spending Aston Villa.

It is not uncommon to see a newly-promoted side start the season well but Bournemouth’s fast-and-furious approach from the off seemed to stun Villa. 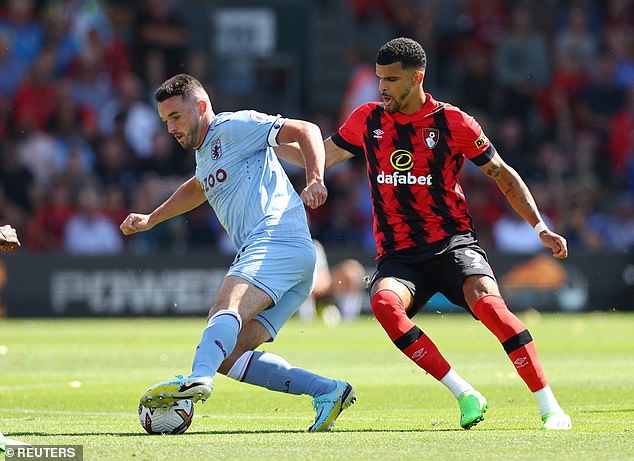 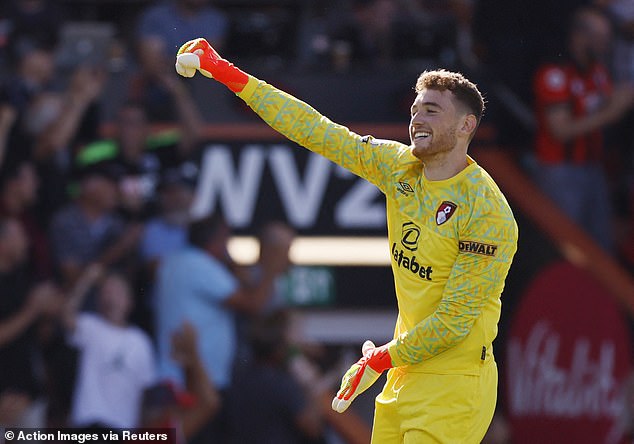 Just one minute and 52 seconds were on the clock when Jefferson Lerma fired the Cherries into an early lead, pouncing on a loose ball after Villa failed to defend a corner.

The Vitality Stadium is by far the smallest in the division but, as many big clubs will recall from their last stint in the Premier League, it is a raucous little ground and tricky to visit.

Bournemouth continued to play fast, zapping football and Dominic Solanke might have extended their lead if not for a smart stop from Villa goalkeeper Emi Martinez. 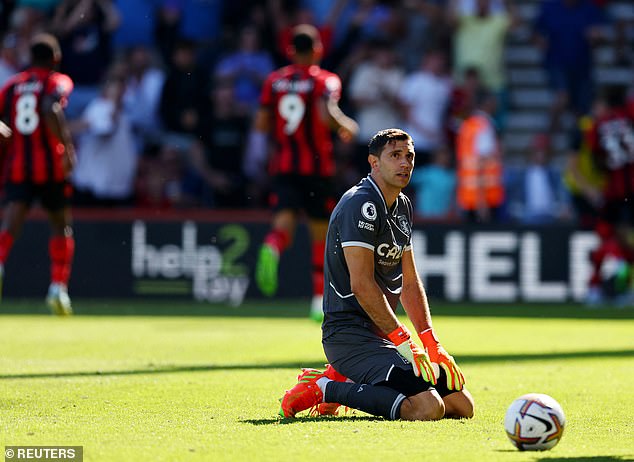 Solanke is a different animal than we last saw in the top flight. He managed just four goals in their relegation campaign but struck 30 last season, and has developed a predators’ instinct.

As for Villa, this was a typical season-opener performance in the first half. They were lethargic in possession and struggled to get Philippe Coutinho into the match.

The Brazilian took a hefty pay-cut – albeit hardly scraping the barrel at £120,000 a week – to reunite with former pal Steven Gerrard on a permanent deal and will be crucial this season. 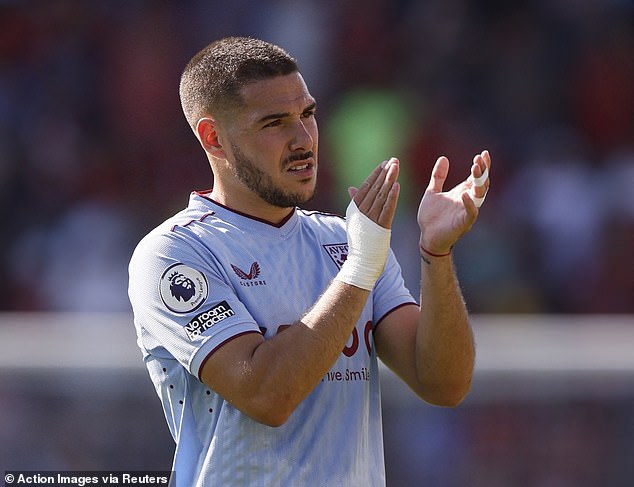 One wondered if his creative talents were wasted on the left wing in the first half and Gerrard changed this at half-time with an aggressive substitution.

Emi Buendia came on, allowing Coutinho to get on the ball more in central areas, but neither of their South American creators could impact the game.

That was testament to Bournemouth’s steely defensive play. Parker’s side looked well drilled and goalscorer Lerma, a midfielder by trade, excelled in a back three.

When you assess Bournemouth, it’s easy to see why Parker publicly lambasted the board for a lack of signings this summer.

They made just three additions – two of which were free transfers. The only one which cost any money, £10million Marcus Tavernier, looked excellent.

Tavernier, signed from Middlesbrough, played just off the strike duo of Moore and Solanke and drove the Cherries forward on counter-attacks with searing runs. 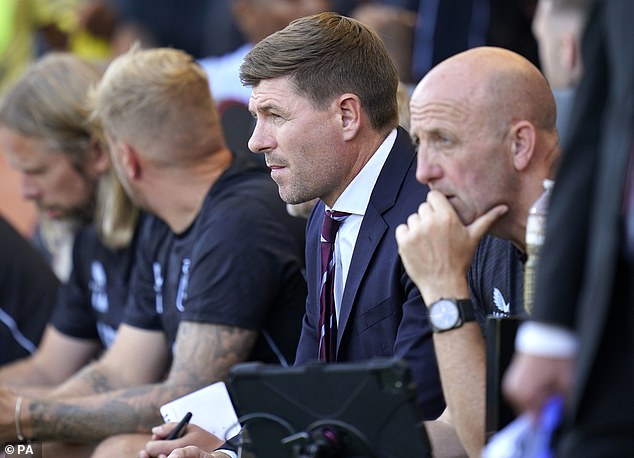 It looked like this match was heading towards an inevitable equaliser as Bournemouth’s defence got deeper and deeper to see out the win, but in a rare foray forward they doubled their lead.

Lloyd Kelly, another member of the stellar back three, put in a floating cross to pick out Moore.

Time seemed to stand still as the 6ft 5in unit hung in the air and simply caressed the ball with his head into the far corner past Martinez.

Mini verdict: This was the perfect start to the season and probably beyond fans’ expectations given a frustrating transfer window. They looked well drilled at the back and attacked with pace on the counter. Scott Parker will not get complacent though and knows it will be a long season if no new faces come in the door.

Marcus Tavernier – The only player Bournemouth have spent money on so far this summer. Made some good runs and supplemented the two strikers well – probably their best attacking threat. 7.5/10.

Mini verdict: Steven Gerrard looked angry at full-time but will not worry just yet. Tactically, he will have more questions than answers. How to get the best out of Philippe Coutinho? To start Ollie Watkins or Danny Ings, or both? Can Leon Bailey and Emi Buendia have a better second season? Why can’t Villa put away below-par teams, having now just won two of their last 12 league games?

Diego Carlos – Was beaten too easily in aerial duels a couple of times but settled into the match and looked decent on the ball. 6/10.

Boubacar Kamara – Will provide a defensive shield in the midfield to allow those near him a bit more freedom but, like all of his team-mates, was a bit slow in possession. 6/10.

Philippe Coutinho – An afternoon to forget for the Brazilian, who saw more of the ball in the second half but his crosses and shots were poor. 5/10.