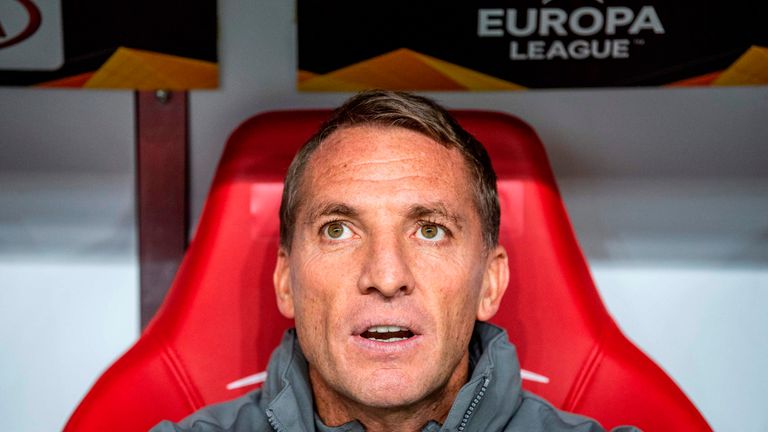 Brendan Rodgers believes Celtic are “still in with a great chance” in the Europa League despite the 2-0 defeat to RB Leipzig in the Red Bull Arena.

But after an encouraging start to the Group B match, the visitors were punished for defensive lapses, first on the half-hour mark by striker Matheus Cunha and again four minutes later by attacker Bruma.

The home side cruised their way through the second half to leave the Scottish champions in third place with three points from nine, with leaders Salzburg on nine and RB Leipzig second with six.

Celtic host the German side next month in the second part of their double-header with a trip to bottom side Rosenborg to come before a game against Salzburg at Parkhead, where Rodgers believes they can claw back their hopes.

“We have seen enough to know that we can win the game at home when the players come back,” said the former Liverpool boss, who revealed the injuries Gamboa and Simunovic picked up makes them big doubts for the Betfred Cup semi-final against Hearts at Murrayfield on Sunday.

“From tonight’s performance, I believe it’s something that’s well within our capabilities.

“It will be a great night with our supporters. Their support was amazing throughout tonight.

“Having 60,000 at home will be a great opportunity. If we are going to have any aspiration of getting through the group, it’s a game first and foremost we have to win. That will be our objective.

“We’ve obviously lost two matches against two very good sides away from home. We’ve got three points on the board which is always important.

“We always knew our home games would be vital for us and try to pick up something away.

“There are three other sides, two very good sides who really are Champions League level opposition, but we are still in with a great chance.

“We have to look at the next game at home and look to win that. If we don’t it becomes really difficult. I believe it gives us a great chance but we know we have some work to do.”