The start of the Champions League group stage is always cause for excitement and this year is no different, with Europe’s top clubs ready to battle for continental supremacy and the biggest trophy in club football.

Already there are games this midweek which pit top clubs against each other, throws summer transfer stories under the spotlight and, after 90 minutes, might provide the first clues as to which sides bear watching most in 2021/22 – and which have improvements to make, fast.

The Premier League clubs are in action with Manchester United and Chelsea on Tuesday, followed by Manchester City and Liverpool on Wednesday.

Here are five key battles and points to watch out for as the Champions League group stage gets underway.

Utter humiliation is the only way to describe what happened the last time these sides met competitively. The pandemic had started the world – not just the football world – had changed, but the sport got back underway in Portugal in a festival of football which saw the latter stages of the 2019/20 Champions League played out in Lisbon.

After Barcelona had seen off Napoli and Bayern beat Chelsea in the round of 16, the two met in the quarter-finals in a much-anticipated meeting, a one-off event with a semi-final spot at stake. Aside from the giant status of both clubs, the meeting was intriguing due to Philippe Coutinho’s loan from one to the other; he’d come off the bench to bag two late goals against his parent club in an extraordinary encounter which saw Bayern eviscerate Barca, 8-2 the eventual scoreline.

The occasion introduced Alphonso Davies to the world if they didn’t already know him by then, and effectively confirmed the Catalan club’s time as a superpower on the pitch had come to an end. Bayern, meanwhile, went on to win the trophy.

Having gone out last year with a similar whimper at the last-16 stage, Barcelona’s downward spiral has continued over the summer with the loss of their talisman, embarrassing revelations about their financial mismanagement and questions over just how long it will take them to rebuild. Bayern have strengthened, look in good hands under new boss Julian Nagelsmann and will be aiming to improve on last season’s last eight exit.

But first, a revisit of this clash.

Defence of the title (Tues, 8pm)

He’s won the Champions League with Chelsea, but this is his first group stage match in charge!

Thomas Tuchel’s rapid revitalisation of the Blues last year started midway through the campaign, with a place in the knock-out stage already earned under former boss Frank Lampard.

The not-so-new boss has made them immeasurably better, far more consistent and has a clinical striker at his behest now too – they’re among the favourites to win the competition this year again for a reason.

Chelsea face a task that few have managed: just Real Madrid have retained the trophy in the Champions League era and no English club has done so since Nottingham Forest in ‘79 – the aforementioned Malmo’s vanquishers – and ‘80. A big task for the Blues, then, but one they’ll be optimistic over. It all starts at home against Zenit.

Paris Saint-Germain are likely to start all three star forwards together for the first time in midweek, with Club Brugge the unlucky opposition to bear the brunt of that talent.

It will be Leo’s full debut if he is in the XI, having only made a single sub appearance so far, while Mbappe is already on four league goals for the campaign after another at the weekend.

Mauricio Pochettino will be under enormous levels of expectation to make the team click and thrive on the European stage, after huge investment – nothing ‘free’ about those transfers – in the summer. Gini Wijnaldum, Gigi Donnarumma, Sergio Ramos, Achraf Hakimi and Nuno Mendes all have to fit in the same team too, somehow – even without naming the stars who were there last season.

They didn’t even win Ligue 1 last term; European silverware is the yardstick for 21/22.

Jack Grealish is the most expensive British player ever, but at age 26 he’s only now going to play in his first-ever Champions League game. His first Uefa competition European club match of any kind, in fact.

He has quickly become a starter for Manchester City and Pep Guardiola domestically this season, but the Spanish boss is known for switching personnel and tactics with regularity – and especially in Europe, where it’s arguable it proved extremely costly in the Champions League final last season.

Big things are expected of Grealish due to the price tag, which he’s fine with, but RB Leipzig will provide a new and exciting challenge for him, as well as for City in general as they bid to go one better than last year. 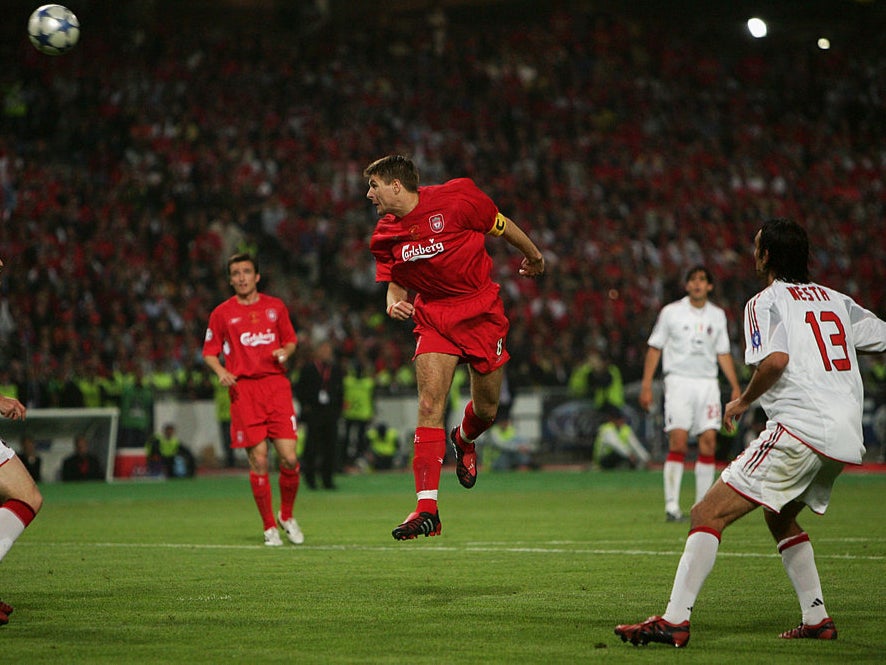 In short, for history and success of the very highest order on the continental stage, it’s near impossible to have a fixture with more prestige behind it – with two in relatively recent terms standing out.

Back in 2005, the English side beat the Italian in the Champions League final in Istanbul, a dramatic comeback from three goals down resulting in a penalty shoot-out win. Two years later they faced off in the final once more, this time with the Rossoneri earning revenge in Athens. Both clubs have endured severe dips since then and fought their way back up, Liverpool faster and higher than Milan have so far managed.

This is a clash that spans generations and is the start of a very exciting group.