Drunk on love? How else to explain this bonkers, hand-in-hand singalong that only briefly took on the appearance of football match?

The bare fact is that Chelsea won. On they go, into a quarter-final and a shot at a pot. But they didn’t so much kick Frank Lampard out of the competition as give him a kiss on the cheek and offer a sincere apology.

The affection was relentless, starting with the banners and continuing with the chants of ‘super, super Frank’ every 10 minutes or so from start to finish. He would wave, they would wave back, sweet nothings whispered to and fro long into the night. 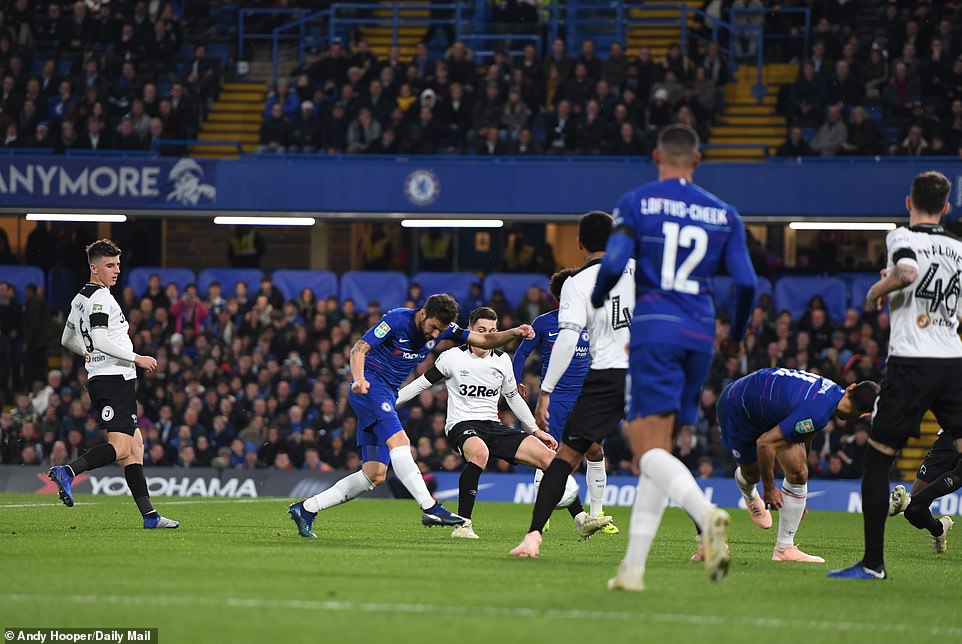 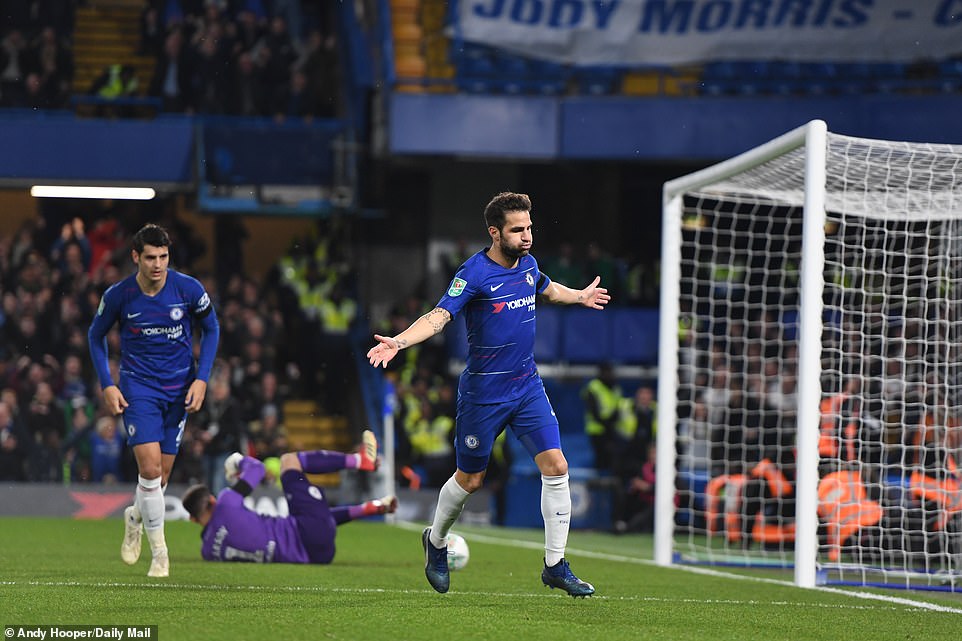 Midfielder Fabregas celebrates after scoring Chelsea’s third goal of match against Derby, which turned out to be the winner The only hope is that those in attendance took their eyes off the touchline hero long enough to watch the madness of the match. It was absurd and wonderfully so, to the point that it is entirely feasible that Derby County of the Championship came as close as anyone this season to inflicting Chelsea’s first defeat.

They ultimately failed, of course, but only after a staggering last-16 tie, in which Derby twice scored own goals before pulling themselves level, only for Cesc Fabregas to hit the winner. All five of those goals came in the opening 41 minutes of football that was magnificently error strewn.

The only unfortunate soul in all of it was poor Fikayo Tomori, who has been exceptional on loan at Derby this season and was granted dispensation to play against his parent club, as was Mason Mount. What differing nights they had – Tomori scored a horrible own goal inside five minutes and Mount set up Derby’s second. 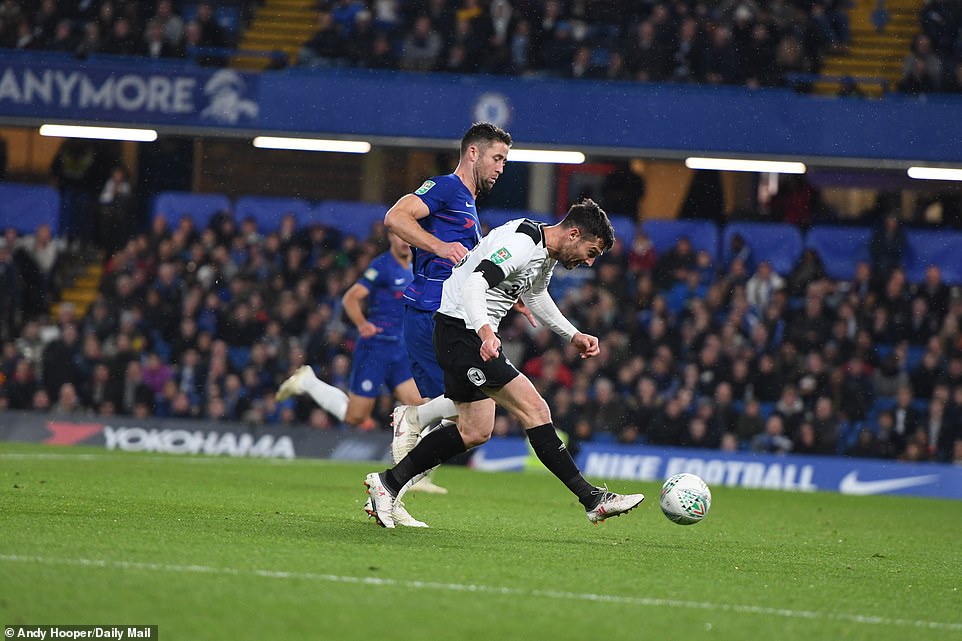 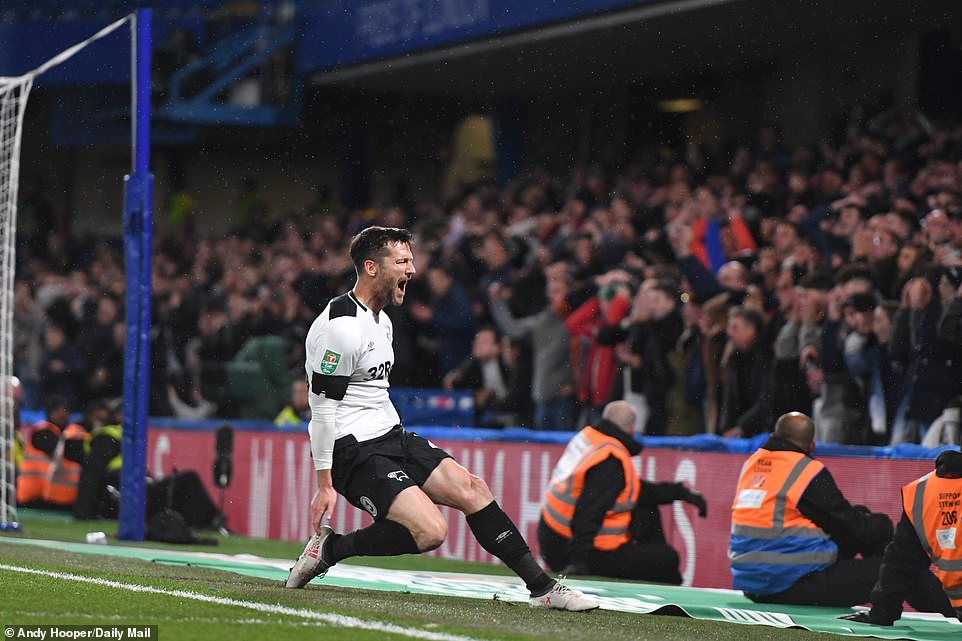 Mount even came close to a late leveller, as did David Nugent who hit the post. Had either chance gone in, then it might just have tested the love for a rival manager who played 648 times for Chelsea in 13 years. Then again, it probably wouldn’t.

Amusingly, it took 86 minutes for Maurizio Sarri, the architect of such optimism this season, to get a chant of his own. Not that he noticed, given how close he came to blowing a gasket at multiple junctures through the night.

Indeed, there was never any danger of him being accused of taking the tie lightly. He made eight changes to the side that clattered Burnley for four on Sunday, with only N’Golo Kante, Willian and Alvaro Morata retained and Ruben Loftus-Cheek given a start, but it was hardly a duff side. Weakened, yes, but weak? No. 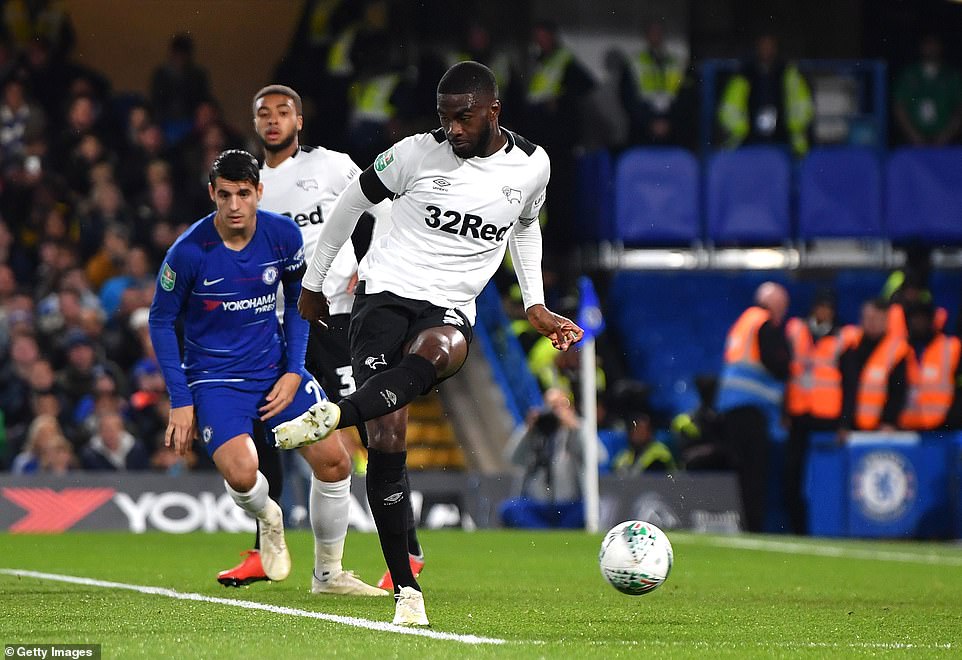 Derby’s Fikayo Tomori, a Chelsea loanee, scores an own goal to put his parent club ahead within the first five minutes of game 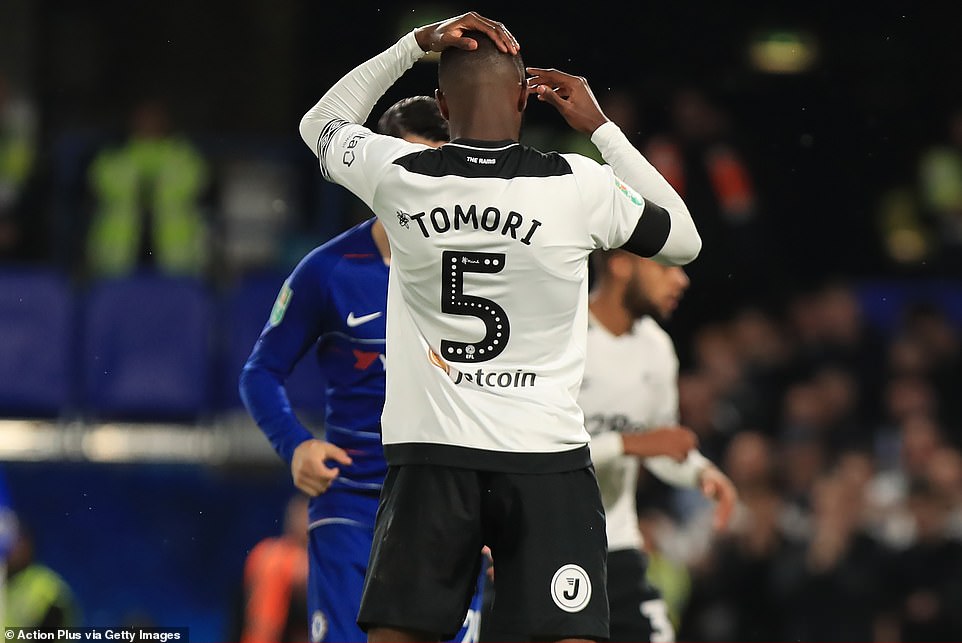 Lampard went as strong as he could, fielding the same 11 he used against Middlesbrough, courtesy of the written dispensation from Chelsea that allowed Mount and Tomori to play. His former employers had maintained it was less a case of special favours for a dear friend and more about the chance of seeing how their boys looked under the microscope.

To that purpose, they saw plenty. Quite possibly too much, particularly of Tomori, whose early clanger carried the extra sting of coming barely a minute after he drew applause from all corners for a sliding challenge on Davide Zappacosta. The home lot were loving him, one of their own wiping out one of their own – a bit odd, but hey, it was that kind of night.

When it went wrong for the 20-year-old, it was brutal. He was attempting to launch clear a fairly innocuous cross from Zappacosta but missed the ball with his left, which allowed it to bounce back off his standing right and past Scott Carson. He looked mortified. 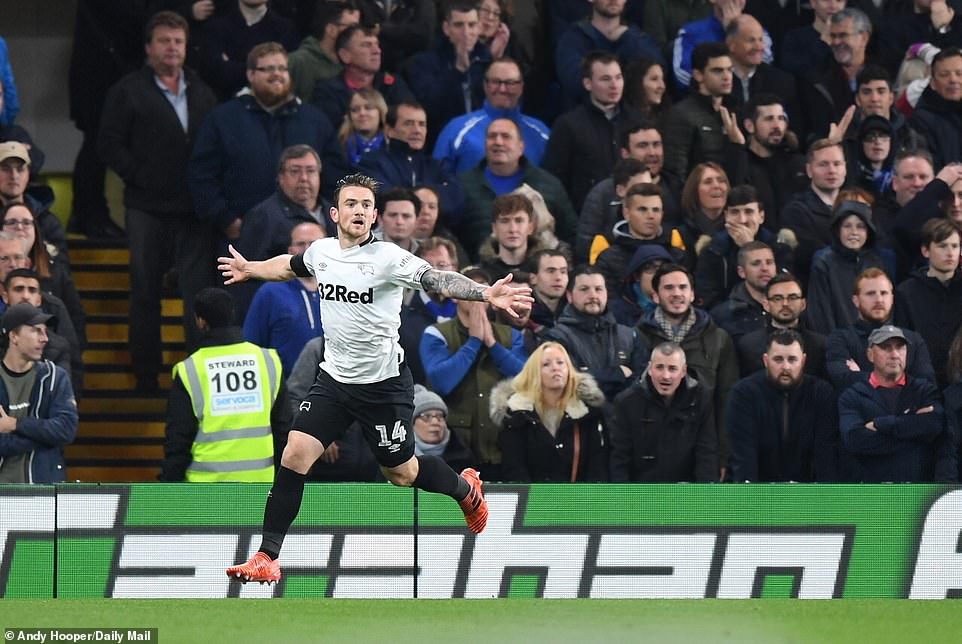 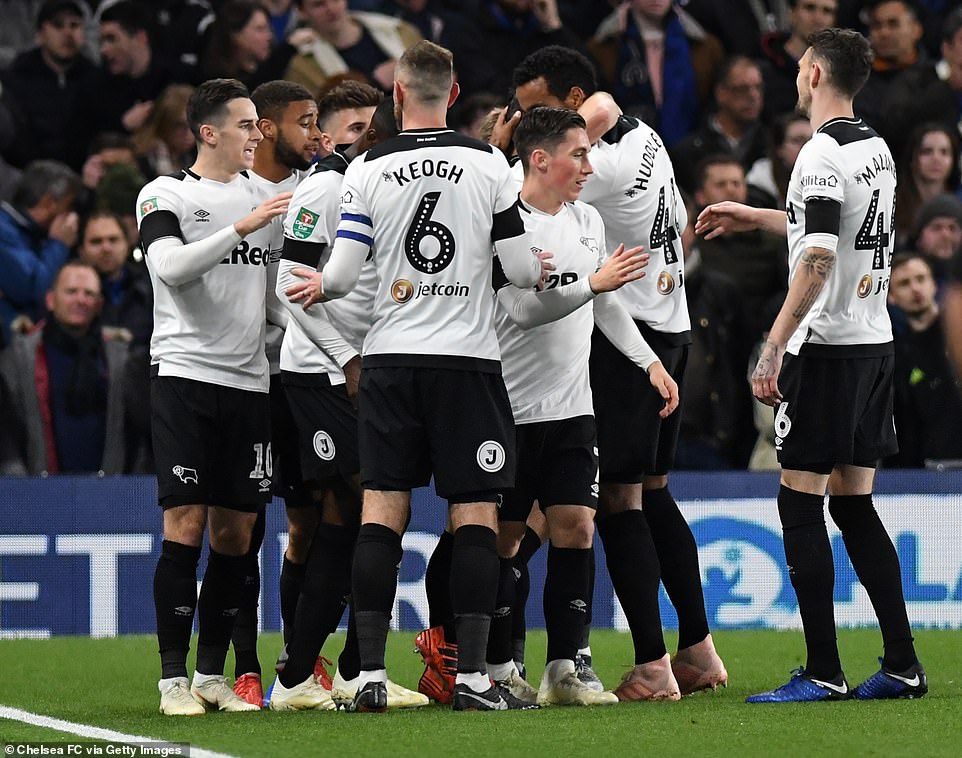 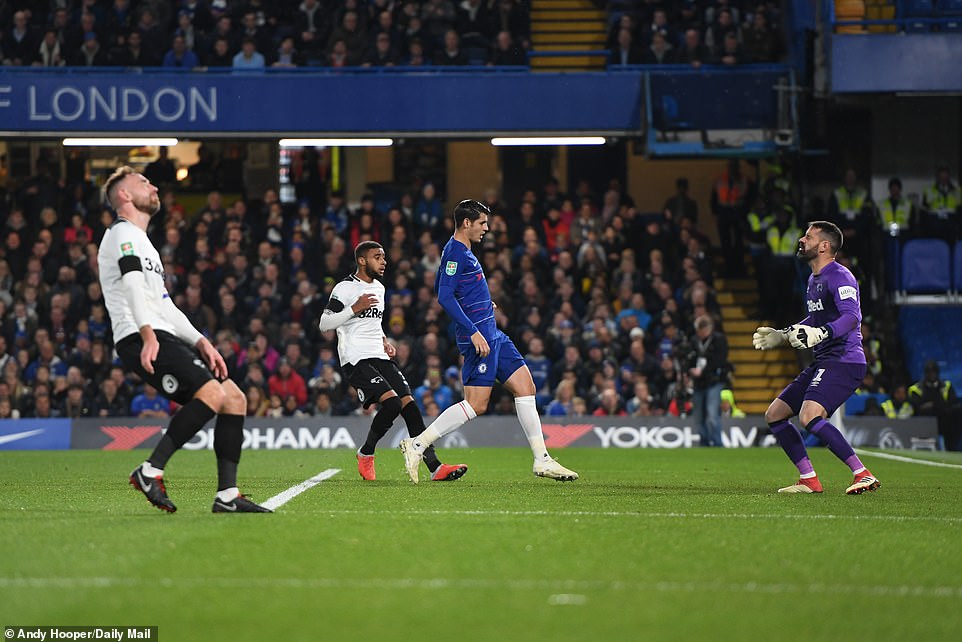 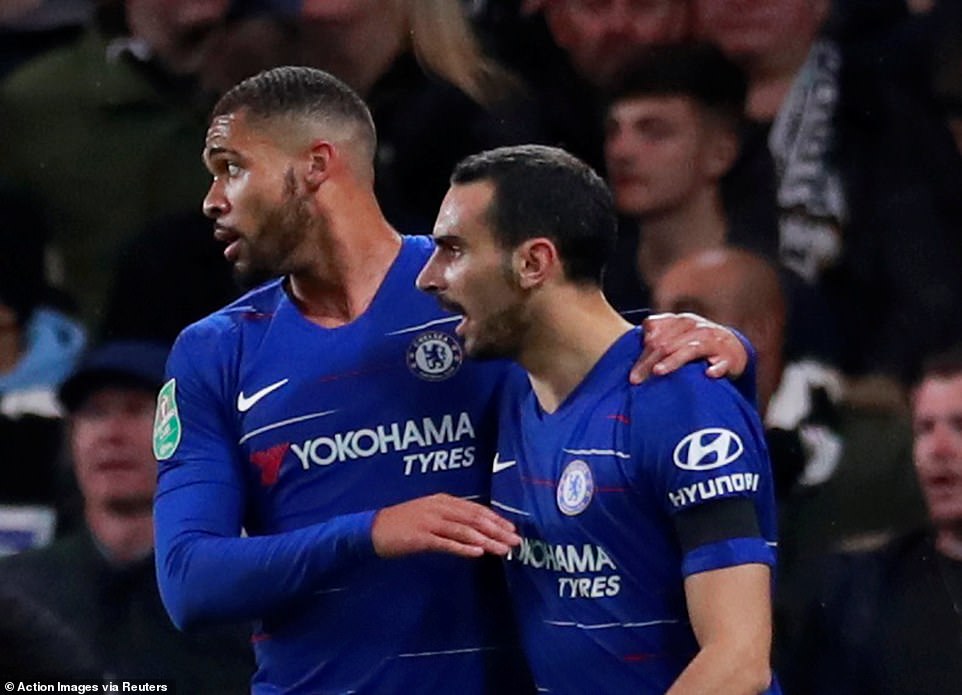 And yet that was just a fraction of the madness because the equaliser was steeped in Chelsea’s errors.

Gary Cahill, given only his fourth start of the season, was largely responsible, having first played a poor pass to Fabregas and then slipping in the moment after Tom Huddlestone had bundled the Spaniard out of the challenge. That left Marriott free to take a pass from Huddlestone on the left, from where he finished across goal.

Derby then wasted a wonderful chance to go ahead when Waghorn tripped in the process of shooting when clean through, before a second own goal had them behind again. This time it was Keogh who turned a Zappacosta cross past Carson.

Amusingly, Chelsea led 2-1 despite not having had a meaningful shot on goal, but once more the advantage quickly disappeared. Mount did well with his low cross from the left, but Sarri will have to ask questions of Emerson’s marking, with Waghorn left largely unattended to attack the back post and finish.

Fabregas had Chelsea ahead four minutes before the break, despite what appeared to be a foul by Zappacosta on Tom Lawrence in its creation, and in its way that was appropriate – a strange end to an absurdly chaotic half. By its conclusion it was hard to offer much praise to any Chelsea player. 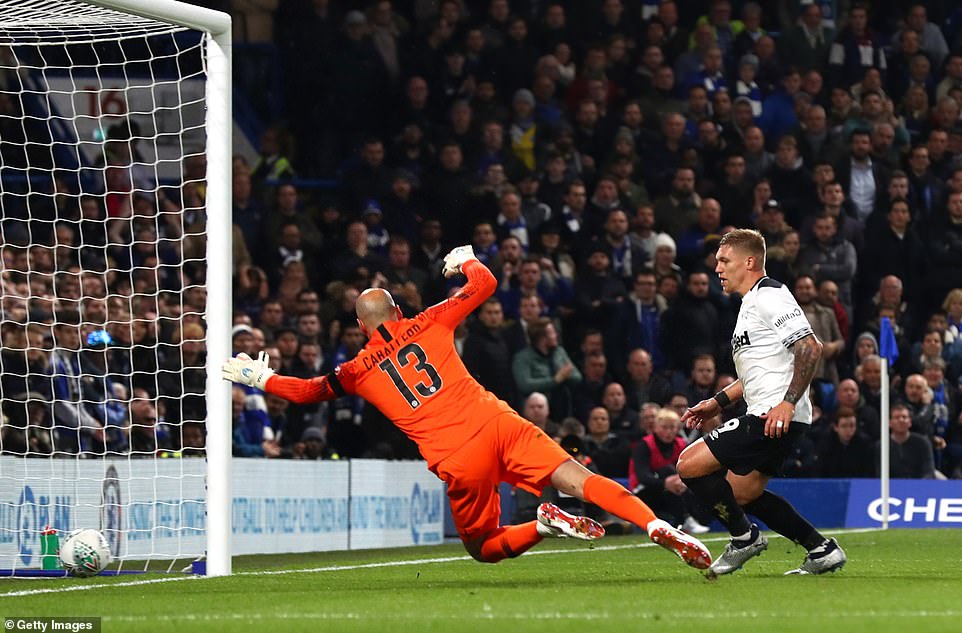 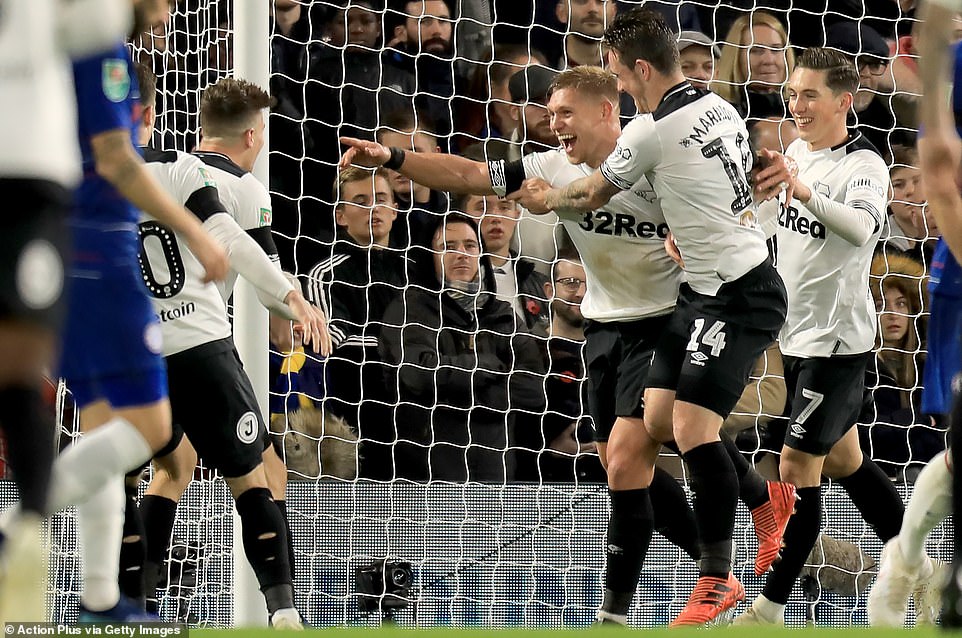 Of them, Loftus-Cheek did little beyond his fall over an advertising hording and one statistic showed Morata had just eight touches. It was pretty darn difficult to remember any of them.

Cahill had a header saved quarter of an hour into a less eventful second period and Marriott forced a good block from Caballero eight minutes later. Mount then had a drive deflected wide, Nugent hit the post and even Morata woke long enough to have a header at goal.

Had it gone in it might just have been the craziest action of a mad night. 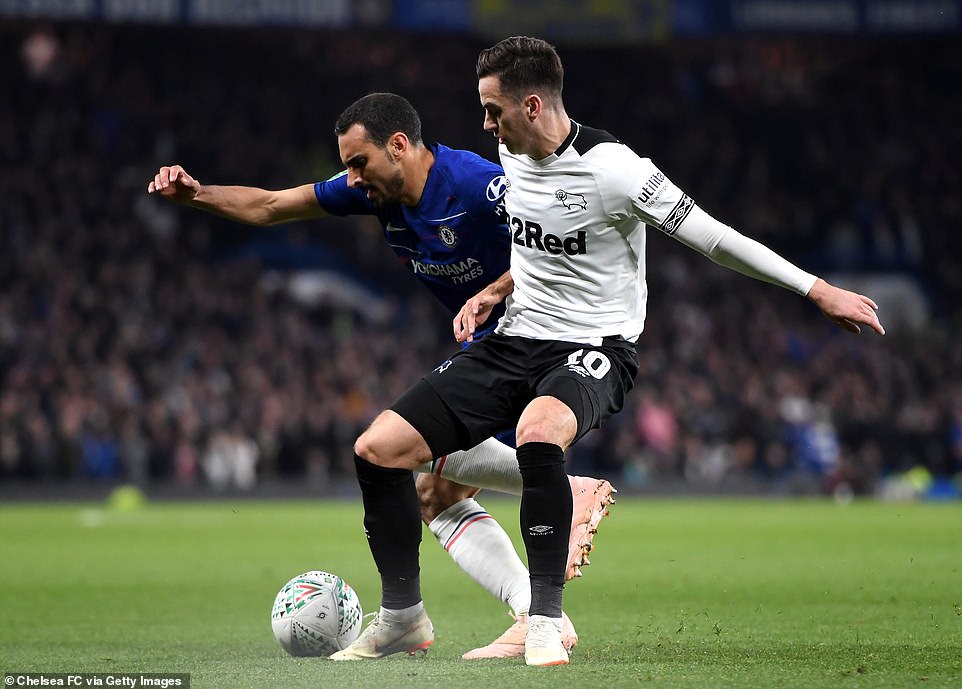 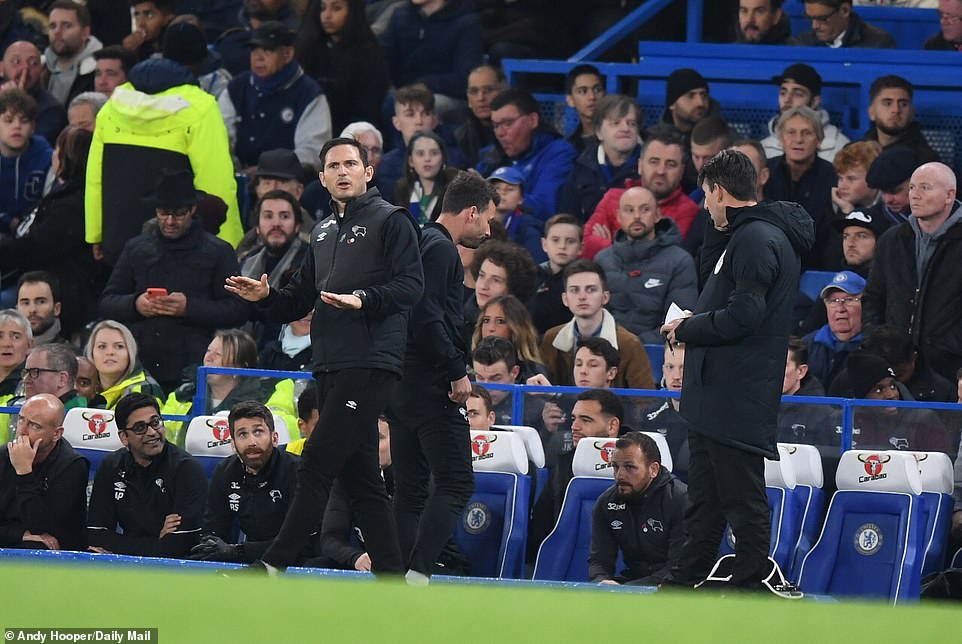 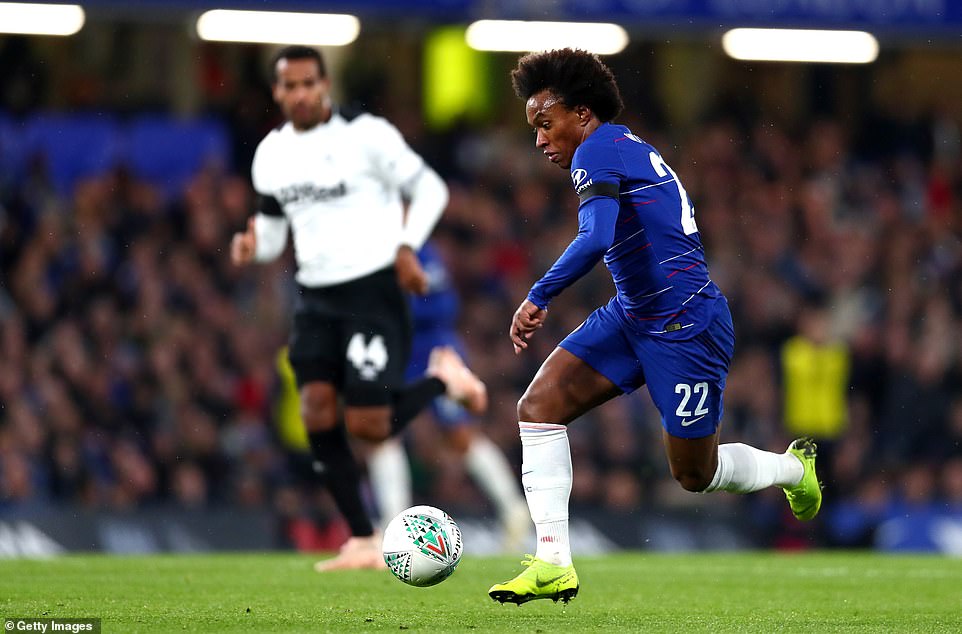 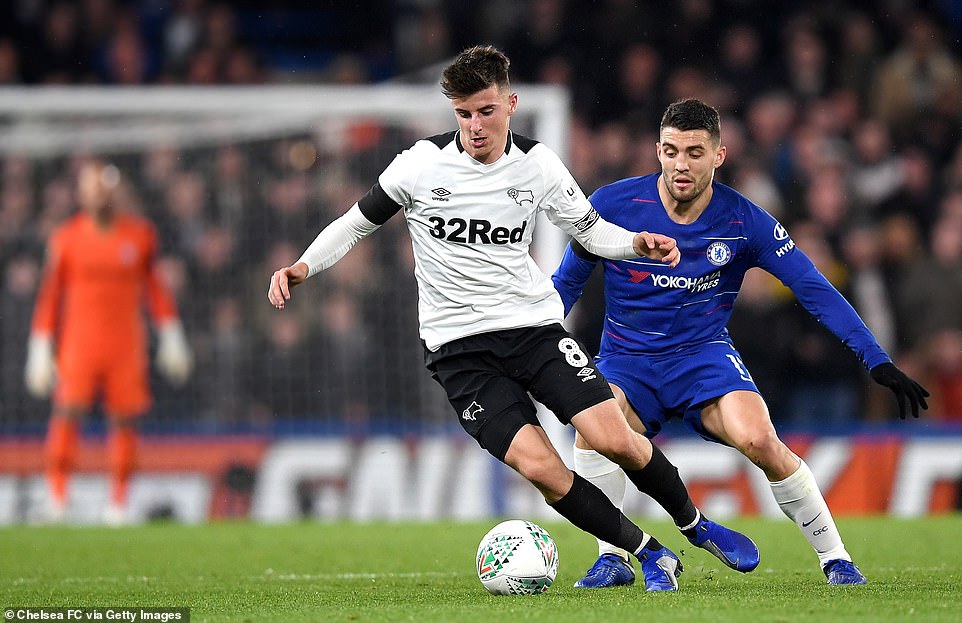 Derby’s Mason Mount, on loan from Chelsea, is challenged by Mateo Kovacic during the tight contest at Stamford Bridge 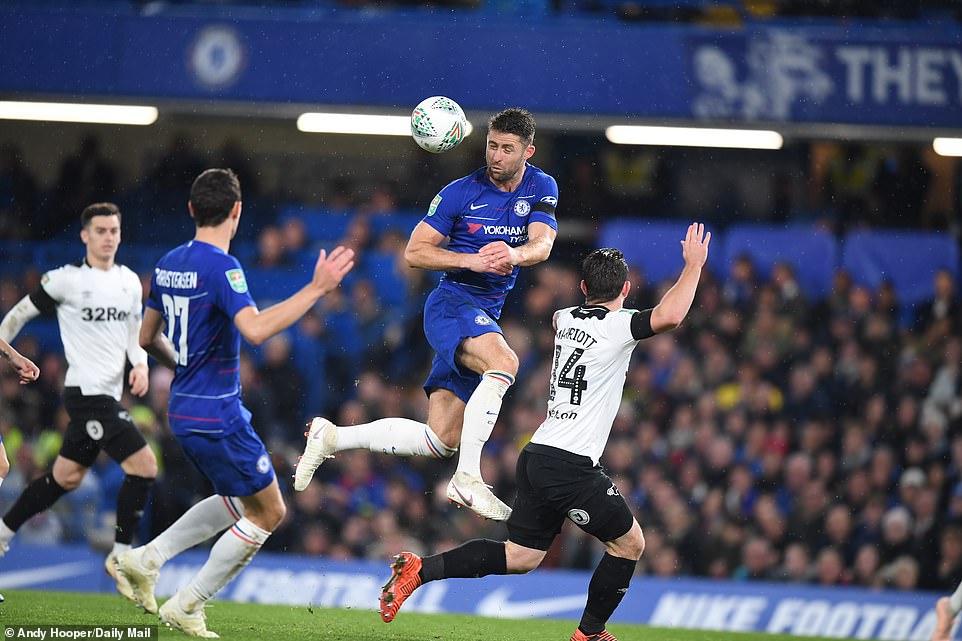