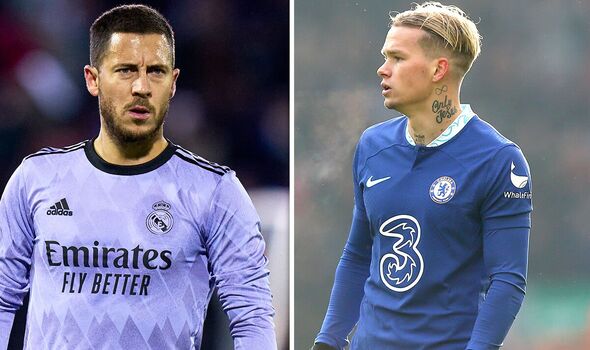 Chelsea winger Mykhaylo Mudryk has been compared to Eden Hazard following his exciting debut. Ally McCoist claims the Ukraine star is quicker than Hazard was during his Stamford Bridge days and the Rangers legend was enthused by what he saw at Anfield on Saturday.

Mudryk came on as a second-half substitute in the goalless draw against Liverpool. It was his first appearance since his £88million move from Shakhtar Donetsk.

The 22-year-old gave James Milner a torrid few minutes, which saw the Liverpool star booked and then substituted by Jurgen Klopp. Mudryk came close to scoring on a couple of occasions and has earned rave reviews for his cameo.

McCoist can see similarities with Hazard after the comparison was made on talkSPORT on Monday morning. And he reckons on another day, Mudryk would have scored the crucial winner on Merseyside.

Win a pair of tickets to the Premier League or Women’s Super League match of your choosing! CLICK HERE

McCoist said: “I’m having him. He looks the real deal. I’ll tell you what he is, he’s a lot quicker than Hazard.

“He is a flying machine. He was on for two minutes and James Milner was chasing him like me at the six-a-side at this moment in time.

“What a turn of pace it was and James was just a little bit late with the tackle, got a yellow card. But no, what a cameo for a start, I thought he probably should have won the game actually to tell you the truth.

“I enjoyed that second half, first half wasn’t great and was devoid of any real quality, but I enjoyed the second half. I thought Chelsea played well and could have won the game.

“Liverpool still searching for it, Nunez came on, but they look as though they’re just searching for a little bit of form, somebody to trigger them to get them going. But no, Mudryk certainly excited the Chelsea fans.”

Chelsea boss Graham Potter was delighted with Mudryk’s impact so shortly after joining. He said: “That was really good. He’s only been with us a couple of days.

“He will only get better the more he is with us, and the more we understand each other, but promising signs. He will get supporters off their seats. His dribbling action is really high.

“He knows where the goal is. We felt it as the right time to put him in, he is a fit boy and has trained a lot. He’s not played since November so it would have been a risk to play him from the start. I am happy for him to get his first minutes and start his career with us.”