‘Eighteen people helped my boy recover from injury, but mental health? There was nobody there’: After ex-Falkirk and Bradford City footballer Chris Mitchell took his own life, father Philip is determined to stop other families suffering the same heartbreak

The jersey resides in the home of a janitor in a Stirlingshire town. It is a Livingston strip from 2005 and has the number 46 on the back.

It was given to Chris Mitchell, then an aspiring footballer, by Paul Lambert to mark the youngster’s ascent to the first-team squad. More than a decade later, the footballer handed it to the jannie.

‘Unknown to ourselves, he was giving a lot of his stuff away,’ says Philip Mitchell, father of Christopher, as he calls him. ‘We found out later that this is a trait that can mean the end is coming.’ 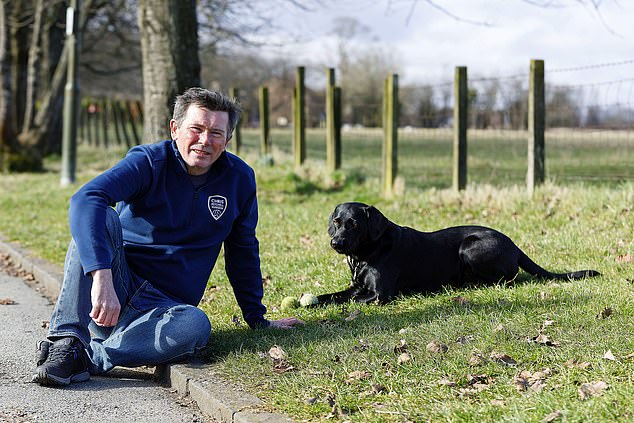 Philip Mitchell set up a mental-health foundation for footballers in memory of his son, Chris

Chris Mitchell, footballer for Livingston, Falkirk, Ayr United, Bradford City, Queen of the South and Clyde, took his own life on May 7, 2016, aged 27.

‘The jersey will stay with the janitor,’ says his father. ‘He met me in the street and offered it back. But he was Christopher’s first coach at primary school. He wanted him to have it. It’s in the right place.’

The bequest is poignant but the legacy of the footballer stretches far beyond the football pitch and lies now at the heart and soul of the Scottish game. Christopher lives on. The foundation in his name, set up by his father and sister, Laura, has now joined with the SPFL Trust in training staff at all 42 clubs in mental health first aid for footballers. 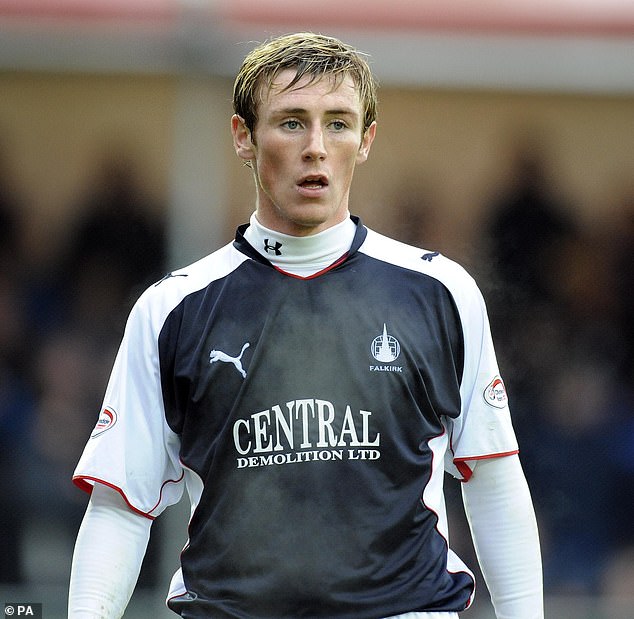 ‘The trained staff don’t offer a cure,’ adds Mitchell. ‘They serve as a conduit. Very few players take the first step in asking for help. Trained staff can identify who is having a dip and ask the proper questions. The players can then talk to the right people.’

The programme is thus deeply professional. But it is profoundly personal for Mitchell, a 60-year-old retired police officer, whose evocation of his son is moving and whose efforts to save the sons and daughters of others is gently, quietly inspiring.

Mitchell talks regularly of being part of a ‘normal family’ before tragedy struck. He is measured, composed and generous of spirit. He knows what happened to Christopher is happening to others on a daily basis. There were 833 suicides in Scotland in 2019, up from 784 in the previous year, in the most recently released figures.

Mitchell believes mental health, too, is a significant issue in Scottish football. ‘It’s a sore, without a shred of doubt,’ he says. ‘The emphasis has always been to get a player physically fit. The attitude to mental health historically has not been great. It’s well down the priority list.

‘Look at it this way. During one of Christopher’s injuries, we could count 18 people who had helped him to recover. But mental health? There was nobody there.’ 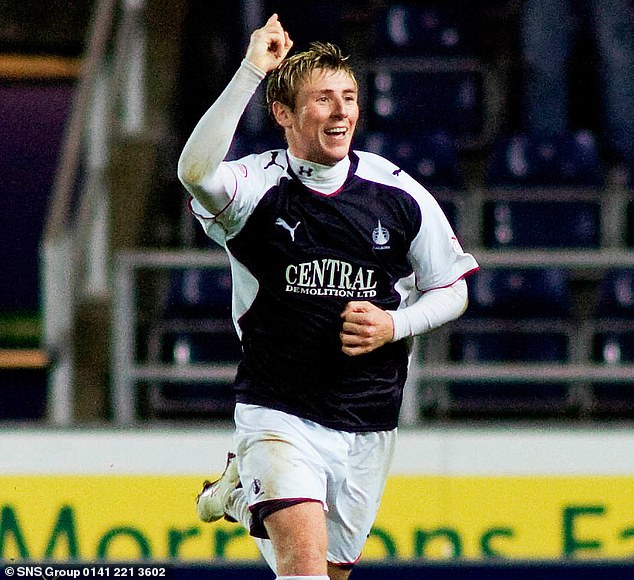 Together SPFL Trust, Mitchell’s father is helping training staff at all 42 clubs in mental health first aid for footballers.

Christopher Mitchell’s death has thus a significance for his former colleagues. His life, though, deserves to be celebrated, for he was a character of wonderful spirit, boundless humour — and one who achieved his ultimate dream.

‘He always wanted to be a footballer,’ explains his father. ‘I know that is a common dream but, at the age of 14, it was realistic. He was playing for Scotland schoolboys against the likes of Theo Walcott and Micah Richards. Christopher was clever and could have done other things but football was almost everything to him.’

His father was an internationalist, but only in the sense that he played for Grangemouth International. ‘I was a bad player,’ he admits. ‘I did receive an award for playing 28 years in amateur football. That was my level, playing for St Modan’s High School FP.’

He knew his son was different. ‘When he was playing with a soft ball at just two, I could see his hand to eye co-ordination was exceptional. At 10, we went on holiday to Majorca and every day I played with him on a tennis court with a ball the size of a fist. I could see then he had an undoubted talent.

‘He would play fives with me and my friends if a team was short of a player. He was only a wee boy but his technique was obvious.’

Football beckoned. Despite good grades in his exams at Dunblane High School, he shunned further education, signing a contract with Livingston.

A career blighted with injury ended with his last professional game, for Clyde, on January 30, 2016. ‘He missed everything about it,’ says his father. ‘But particularly the dressing room. His life was there.’ He took his life less than four months later.

Winston Churchill called depression his black dog. Philip Mitchell calls his black dog Darcy. ‘It’s a labrador,’ he says. ‘My best pal. We go for long walks every day. That’s when I ask the questions.’ 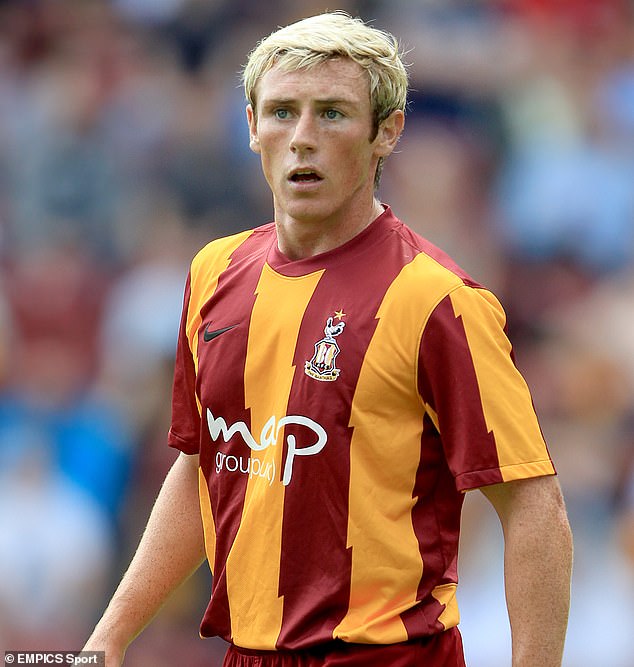 There are some, of course, that remain unanswered. But Mitchell has found a resolution to others and a resolve to conquer the most important. The foundation set up in the wake of his son’s death seeks to ‘raise awareness around mental health and wellbeing’ among those working in the professional game in Scotland.

The latest initiative sees all 42 SPFL clubs enrol staff in mental health first aid. This programme will be delivered by the SPFL Trust and the foundation.

‘Christopher slipped through the cracks,’ says his father. The injury toll on his son diminished him physically and mentally. The departure from the game he loved led to problems with depression and anxiety.

‘You could see he was down with every injury,’ says Mitchell. ‘The injured player is often forgotten. Clubs are focused on the healthy player who is available for selection and can help win games. The injured player is standing on the sidelines and can become isolated. The players walk out the dressing room and onto the park. The injured player walks off alone most of the time. This leads to mental-health problems.’

One properly trained person could spot the danger signals and perhaps lead the suffering footballer towards refuge.

‘That’s what we hope can happen now,’ says Mitchell. More than 600 people have taken part in the course, with demand increasing. ‘I would like to see managers, chief executives, everybody, attend and see how they can identify the danger signals,’ he continues.

This week, a film was released highlighting the legacy of his son. Scott Arfield, of Rangers (inset, above with Chris Mitchell when team-mates at Falkirk), talks of how the football landscape has changed in the wake of the tragedy. ‘I see it in changing rooms now,’ he says. ‘People are far more open. There’s no doubt what happened to Chris changed things massively. Chris was my best friend. He is sorely missed by all of us every day.’

The most grievous loss is that of the family, however. Losing someone to suicide carries an awful pain. ‘The main impetus for the foundation is to try to ensure it doesn’t happen to another family,’ declares Mitchell.

‘In many ways, we were a normal family, just rolling along until this happened. We want to remind clubs they have a duty of care to players, including that transition into retirement.’ 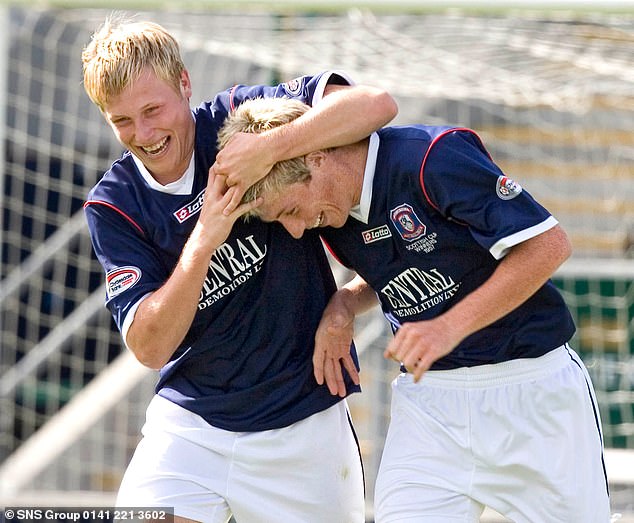 This is where the father believes his son was failed. There was no support from fulfilling his childhood dreams to suddenly becoming surplus to requirements. ‘He was a professional footballer,’ says his dad. ‘Then suddenly he wasn’t. It isn’t hard to see that people need help with that. Scotland revolves around football.

‘It’s a dramatic event to move away from that forever. Sometimes it is a case of telling footballers: “You’re out”. Then there seems nothing else. Did Christopher feel worthless, isolated? The days after football were the most dramatic in his decline.’

This is an experience shared by many players though, mercifully, rarely with the tragic consequences of the Christopher Mitchell story.

It is, however, a narrative that continues. The foundation has tried to ensure that awful tragedy can be avoided through the blessing of intervention.

It has been hard, difficult work. The father, though, is paying tribute to his son by helping those he revelled in being around and in the game they both love.

‘This mental-health programme is now part of all football from the SPFL, through the women’s game to grassroots football,’ he says. ‘This is a conversation Scottish football should have had a long time ago.’

His walk with the dog awaits. ‘I do a lot of thinking on these walks. I often wonder what if we knew then what we know now?’

The knowledge has been gained, however. Some parents will always have cause to thank Chris Mitchell and his memory. He is now saving the lives of their children.

For more information, contact the Chris Mitchell Foundation at [email protected] or the SPFL Trust at spfltrust.org.uk