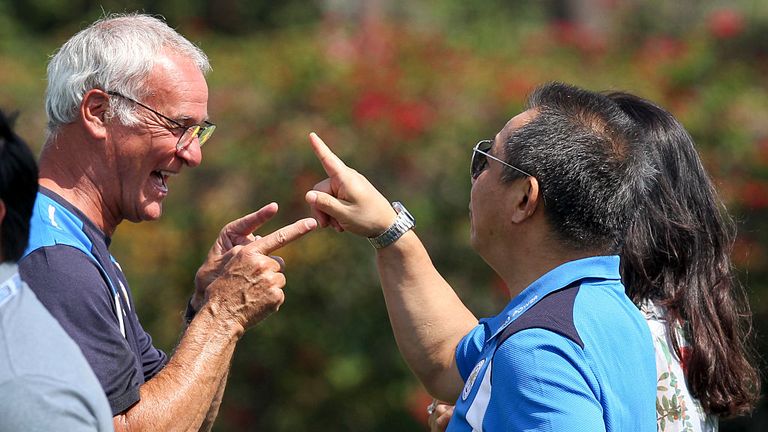 Former Leicester manager Claudio Ranieri says he was “shaken” and “so sad” after learning of the death of the club’s owner Vichai Srivaddhanaprabha.

The Thai businessman was one of five people to die in a helicopter accident in the vicinity of the King Power Stadium on Saturday night.

Two and a half years ago, he and Ranieri had both played big parts in one of the most unlikely stories in Premier League history, as Leicester secured a memorable title success under the Italian’s leadership.

Speaking to Sky in Italy, Ranieri said: “I was terribly shaken by the news.

“He was a good man and always had a positive word for everyone. His positivity and ability to make everybody love him was clear for all to see.

“He came into the dressing room only to dispense kind words, never to reproach you.

“One time, soon after my birthday, he arrived in the dressing room with a huge cake and made everyone sing ‘Happy Birthday’.

“He was an illuminated man and everything he touched became better.

“Now it’s up to his son (Aiyawatt), who has always been in love with football, to carry on in his father’s footsteps.”

Srivaddhanaprabha’s closeness to the Leicester staff and players has been regularly remarked upon, and Ranieri says his former boss was no ordinary chairman.

“I remember when we first met, that I immediately thought he was a positive person, full of energy,” said Ranieri.

“My objective when I arrived at Leicester was to secure Premier League safety, then we all know what happened.

“Vichai Srivaddhanaprabha made a very important contribution to the Premier League victory, as he’d arrive 30 minutes before the game to embrace everyone.

“He never said a word out of turn, was always happy, with a smile on his face.

“I am so sad right now, I want to join the family in their grief.”