‘I’m grateful for his guidance but pained by his parenting’: Clive Allen describes feud that ruined his relationship with father and fellow Tottenham legend Les

The Allen family is one of the most celebrated in English football. Tottenham’s Double-winning striker Les Allen was at its head.

But, in a new book, Clive Allen reveals that — behind all the successes on the field — a bitter family feud tore them apart off the pitch and left his father Les a stranger to his grandchildren. 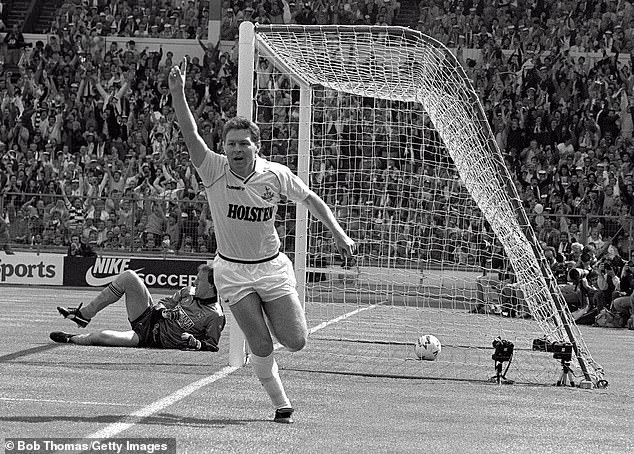 I never thought I’d lead the line at White Hart Lane one more time. About 50 former players and managers had been invited to walk onto the pitch at full-time and there was genuine confusion about how we would be organised.

It was Sunday, May 14, 2017. The last game at White Hart Lane. Tottenham had beaten Manchester United 2-1 and a farewell ceremony was taking place.

The booming PA took over: ‘Please welcome our former players who graced this pitch.

‘Our first man scored a record 49 goals in 1987, double footballer of the year — striker CLIVE ALLEN!’ 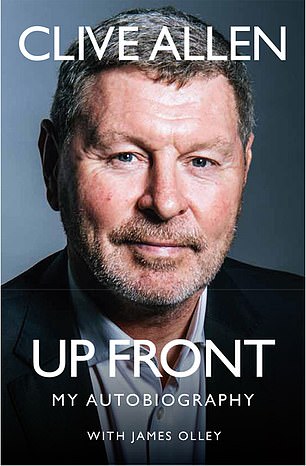 Up Front by Clive Allen with James Olley will be available on Thursday, October 17 (£20)

The crowd cheered as I made my way out onto the pitch, waving and smiling to all four corners. What a moment. I’d barely taken 10 strides when the PA continued.

I reached the centre as my cousin Paul took his applause and walked to the other side of a central plinth from which world-renowned tenor Wynne Evans would later sing.

‘The scorer of the first goal in that legendary Double season of 1961, striker — LES ALLEN!’

With a crutch under his right arm, Dad made his way across the grass as the roll-call continued.

The emotion of standing next to my Dad and my cousin while being described in those terms overwhelmed me. I looked across at Paul. He smiled back. I looked at Dad. Nothing.

Dad scored 27 goals in Spurs’ Double-winning season of 1960-61 and played alongside the legendary Jimmy Greaves before moving to QPR in 1965. Bill Nicholson described Dad as his most dangerous player in the Double team.

As I began progressing through my teenage years, I became aware of how unique it was to be part of an extended football family.

When representing district or county teams, I’d hear people say ‘Oh, he’s an Allen’ or ‘His dad was a player’. Carrying the family name became something to overcome. My cousins Paul and Martin had the same hurdle. 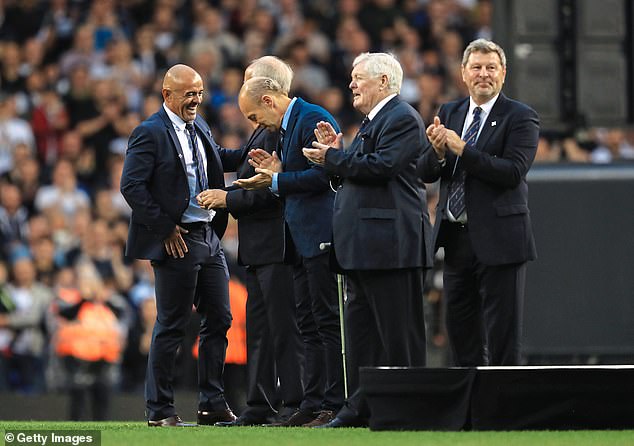 As a young player at QPR in the 1970s I certainly wasn’t given any special favours because of my dad. In fact, I assumed I’d have to work twice as hard for recognition and spent hours practising my finishing with coach Theo Foley.

Theo wouldn’t call me Clive. He preferred ‘Son of Les’, a phrase he used in my presence for years after I signed. Dad took more of a backseat at this point but we’d already endured some difficult times.

Our relationship was particularly strained when I was about 13 to 15, before I went to QPR as an apprentice. Dad treated me like a young professional and sometimes I came home in tears. My mum, Pat, would always ask me what was wrong and her sympathetic, calming influence was a counter-balance to my Dad’s relentless cajoling.

Signing professional terms is a huge moment in anyone’s life but I hadn’t achieved a level he was happy with. After joining QPR, he told me: ‘Right, it is now down to you.’

He still watched my games, though, and if he thought I hadn’t played well he wouldn’t have to say anything. I knew. One look would say a thousand words.

In the back of my mind, my Dad’s words drove me on — unless you push yourself every minute of every day, you will fail.

Yet, regardless of how many goals I scored in a game, Dad would remind me of the wasted chances.

It has always been complicated. I’m grateful for his guidance but pained by his parenting. Whenever I pushed back or felt I was winning a particular argument, the same line would halt me in my tracks.

‘It’s better to be a has-been than a never-was.’

My Dad’s unrelenting ways caused us to fall out throughout my career. Often it was over the innocuous things. At Tottenham I was given two season tickets and two complimentary tickets for each game — which I gave to him.

Although the seats were virtually the same, he felt he should have been given the season tickets, which my wife Lisa used. This stalemate should have ended around the time my goal-scoring form put me in the mix for the players’ player of the year award. But the situation had grown into something of a stand-off.

In fact it was the point where my relationship with Mum and Dad began to deteriorate. 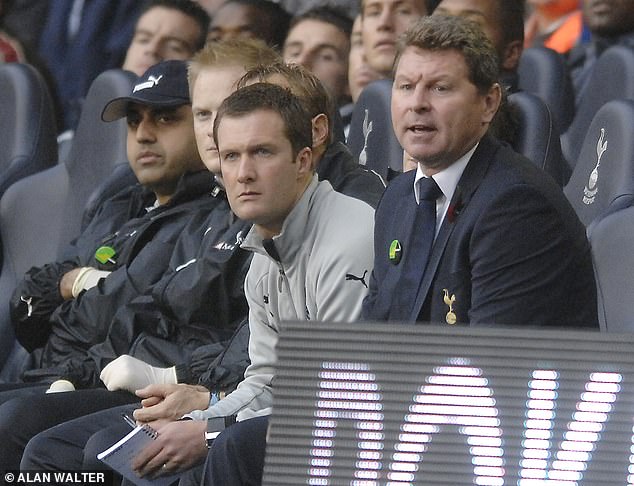 Even a decade later, after I had finished playing and launched a career in the media, relations were still strained. My older brother Andrew was having personal difficulties. Bradley wasn’t speaking to him much at the time and neither was I.

I’d tried to help him but he’d been pushing me away. Bradley is very black or white on things like this and he’d chosen to give Andrew a wide berth. Living in Grimsby, where he was playing, only distanced him further from the situation.

Lisa had spoken to my mum about the domestic tensions and suggested getting everyone together at their house in September 1999 to celebrate Dad’s birthday.

Lisa and I turned up with the kids. Andrew had his back to us and didn’t even turn around when we arrived. Bradley and Hayley turned up shortly afterwards and he did the same to them. Bradley couldn’t take it and started calling Andrew out on his behaviour. I backed up Bradley. It went completely pear-shaped after that.

And all the while, Dad just let it happen. My son Olly was old enough to understand what happened and after we got the kids back home, he was very upset. 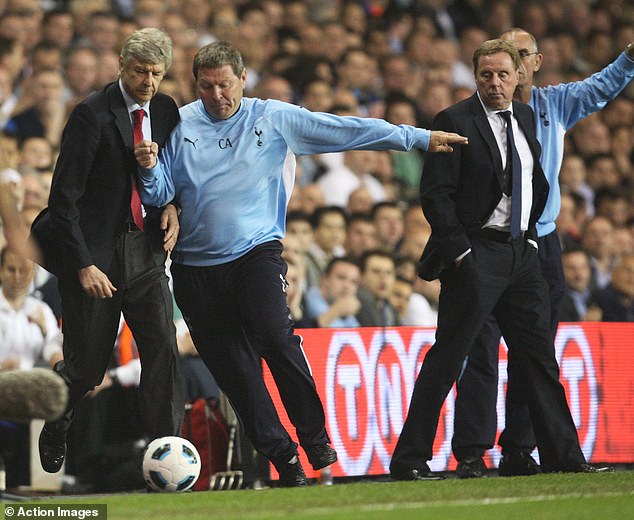 Olly had been seriously ill over the previous two years with a swelling on his optic nerve. He had missed 22 months of school and had spent long periods visiting Great Ormond Street Hospital. I called Dad after this row and told him if Olly relapsed into illness over this, I’d kill him. I didn’t mean it, of course, but I was furious and extremely upset, too.

An attempt at a reconciliation at Christmas that year fell flat. Dad said he wouldn’t come. Mum took the middle ground by stating she would pop up for a cup of tea but wouldn’t come for lunch.

She did just that. My sister-in-law Hayley and Lisa had bought angel outfits for the two babies — our Lydia and Phoebe — and I think seeing them and chatting about our plans to celebrate the millennium with all our family and friends in a marquee in our garden brought the emotion of the family squabbling home to her.

She got upset and went to leave. I followed her out onto the driveway. ‘What’s the matter, Mum?’ I asked. ‘I’m going to stick by my first love — and that’s your father!’ I think we both knew at that exact moment that a line in the sand was being drawn.

‘Mum, whatever Dad decides, don’t let it stop you coming here. You are always welcome here to see us and the children.’ 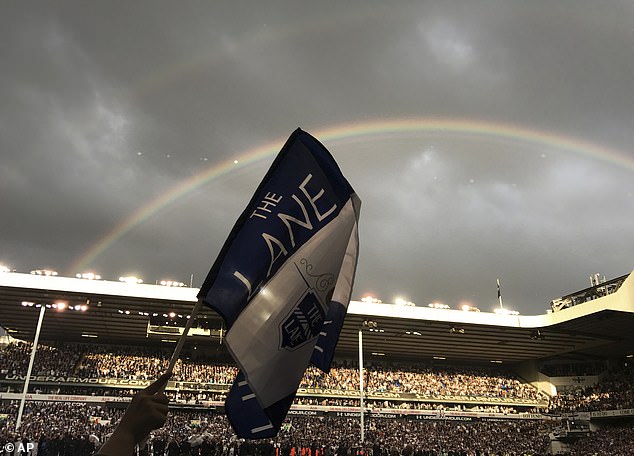 From that day, Mum came to the odd party over the following few months but then she gradually stopped sending cards at Christmas and birthdays to us and the kids. They had no further contact with us, which is very sad.

Until that one day at White Hart Lane in 2017, the final match to be played at Tottenham’s old ground.

Before the game, most of the former players were scattered throughout corporate hospitality having lunch, myself included. My parents were sitting on a table with the Double-winning team alongside Cliff Jones and several others.

It was an awkward situation as my parents and my children had not been in the same room for many years. I had to tell them.

‘Nan and Grandad Allen are over there,’ I said, pointing in their direction. ‘Yeah, I know,’ said my son Ed. ‘We went over to say hello.’

I couldn’t believe they had gone over off their own back like that, cutting through years of animosity.

‘What happened?’ ‘Oh, nothing,’ said Ed. ‘We just said hello, gave them kisses, shook their hands and had a brief, polite conversation.’

I got up and went over to see Mum and Dad. Before I opened my mouth, Mum said: ‘Who was that charming young man who just came over?’ ‘That was your grandson.’ She paused, both of them looking confused. ‘What do you mean?’

‘Mum, you know who that was.’ She knew. Of course she knew. I just couldn’t get it. She was in complete denial. 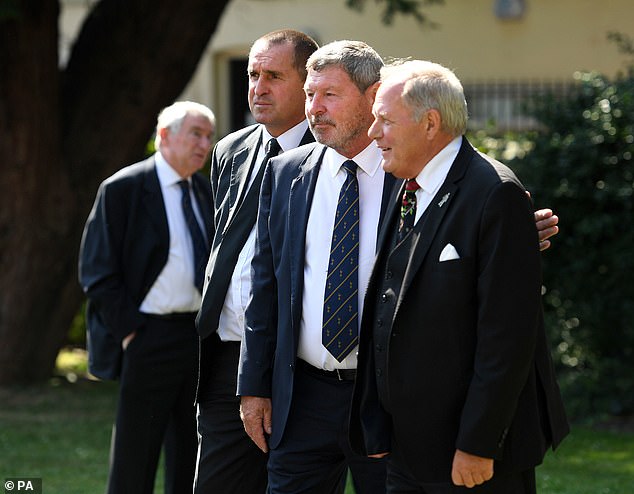 This was an opportunity to make a fuss of my kids — innocent parties in all this — and break down barriers but she acted as if she didn’t know who they were. It upsets me to this day. The kids did it right. I was incredibly proud of them.

After the game, I still exchanged pleasantries with Dad as we were in the tunnel waiting to go out. The crowd cheered as I made my way out onto the pitch, waving and smiling to all four corners. What a moment.

As tickertape was fired into the crowd and cheers rang out, nature provided the best special effect of all — the rain had receded to be replaced by a beautifully bright rainbow over the skyline.

I looked at Dad again. A sensation came over me: in the eye of the celebrations around us, on the pitch we had both played on alongside my cousin with thousands of people celebrating our contribution, I wanted family to come first over football.

Price tags were never a concern of mine but in January 1992 Chelsea got me cheap at £250,000. There were big personalities in that dressing room: Andy Townsend, Vinnie Jones, Paul Elliott, Dave Beasant, Steve Clarke, Dennis Wise, Kerry Dixon — a mainstay striker for so many years.

I was confident I could hit the ground running but the build-up to my first home game, against Manchester United, gave me a snapshot of what I’d walked into.

I was changing next to Kerry and roughly 45 minutes ahead of play, the dressing room door bowled open and in walked Ken [Bates] with his huge fur coat billowing along behind him. 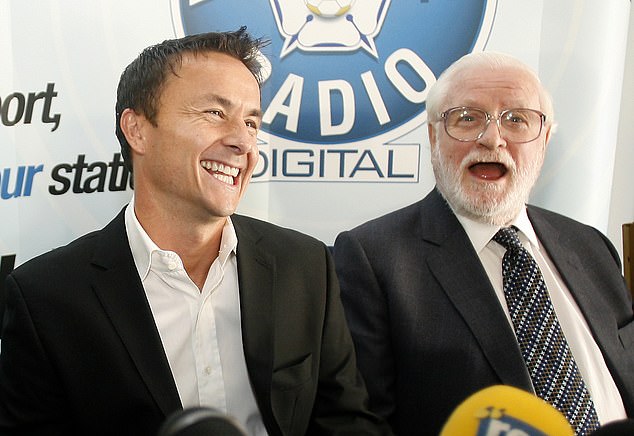 ‘What the f***ing hell have you got on?’ he said. I had to remind myself this was the club captain talking to the chairman.

‘You are just a little s**t,’ Ken replied before adding: ‘And I could still knock you out.’

Wisey’s eyes widened at that comment. ‘Come on then, old man!’

And they went for each other. Wisey threw Ken on the floor in the middle of the dressing room. Water bottles went flying and as some of the lads were pushed back, a scrap ensued.

‘Oh, no,’ Kerry replied. ‘Every time he comes into the dressing room they have a wrestle or a fight.’ Eventually one of the backroom staff got involved to break it up. Ken reorganised himself and caught his breath.

‘You are still a little s**t,’ he said to Wisey, before turning to leave. ‘And the rest of you… you’d better f***ing win today.’

Up Front by Clive Allen with James Olley will be available on Thursday, October 17 (£20).