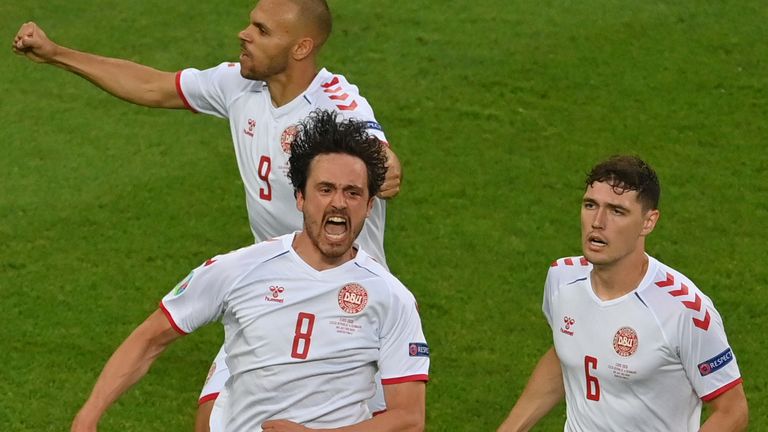 Denmark’s emotionally charged journey at Euro 2020 will continue into the semi-finals after a 2-1 win over the Czech Republic in Baku.

First-half goals from Thomas Delaney (5) and Kasper Dolberg (42) put Kasper Hjulmand’s side in command and while Patrik Schick (49) pulled one goal back there was no late equaliser.

The result sets up a Wembley date with England or Ukraine for a Denmark team that lost their first two matches but have now scored 10 times in winning their last three.

How Denmark won it

The breakthrough came in the fifth minute when Jens Stryger Larsen’s outswinging corner from the right found Delaney unmarked in the middle of the penalty box.

The Borussia Dortmund midfielder did not even have to jump as he calmly directed the header beyond the right hand of goalkeeper Tomas Vaclik and into the Czech net.

That opened the game up with Schick having a shot blocked before Denmark went through on the counter-attack only for Mikkel Damsgaard to fail to apply the finish.

Delaney had the chance to add a second but his checked half-volley was directed just the wrong side of the near post, while Tomas Holes had a shot saved by Kasper Schmeichel.

Czech coach Jaroslav Silhavy made only one change with Jan Boril replacing Pavel Kaderabek at left-back, resisting the urge to restore Vladimir Darida to the starting line-up.

There were no surprises in the Denmark starting line-up as Kasper Hjulmand stuck with the team that defeated Wales 4-0 in the round of 16.

The Czechs were well in it for much of the first half but that changed just before the break with a moment of quality from Denmark when Joakim Maehle raced away down the left.

The right-footed wing-back, playing on the left, crossed the ball with the outside of his boot and his inch-perfect delivery eluded everyone bar Dolberg, who volleyed past Vaclik.

Against a sterile backdrop in Baku, the Czech Republic needed a strong second half to inject some energy into the game and they did just that by creating a flurry of opportunities.

Michal Krmencik had a shot within seconds of coming on before Antonin Barak tested Schmeichel with a bouncing shot. Suddenly, the momentum of the match had shifted.

Schick underlined the improvement when he helped the ball into the net from Vladimir Coufal’s right-wing cross to score his fifth goal of the tournament and halve the deficit.

The pressure was back on Denmark and they endured a nervy period as Simon Kjaer blocked Jakub Jankto’s shot before Schmeichel tipped away a cross bound for Tomas Soucek.

Yussuf Poulsen did force two saves from Vaclik at the other end but Czech pressure was the story of the latter stages in the Baku heat. It did not matter. Denmark held on for the win.

The neutrals’ favourite are going to Wembley.

Denmark coach Kasper Hjulmand: “It’s magical. The first thing I showed the boys when we met was a picture of Wembley from when we were there in the autumn. I said that we were going to come back. It felt like we played in a Danish stadium again, due to the support of our fans. We’re deeply thankful.

“It wasn’t pretty today, but there was fight and a fantastic ‘keeper. The batteries were almost empty, but to reach a semi-final is huge.”

Czech Republic coach Jaroslav Silhavy: “We were 2-0 down after the first half and had to do something with it, so we added another forward and played 4-4-2. We pushed the Danes and scored. But with the passing of time, we did not have enough power to score the equaliser.

“We are grateful to all our players for the performances they have shown during the tournament. They were disappointed, I even saw tears in their eyes. But we were close to a tremendous success and reaching the quarter-finals is a great achievement for the whole of Czech football.”

Denmark will face either England or Ukraine in the Euro 2020 semi-finals on Wednesday at Wembley; kick-off 8pm.