Report as first-half goals from Jordan White and Alex Iacovitti helped struggling Ross County win 2-0 at Dundee United to move out of the Scottish Premiership bottom two; it was County’s first win in six in all competitions and they are now one point above Kilmarnock with two games left 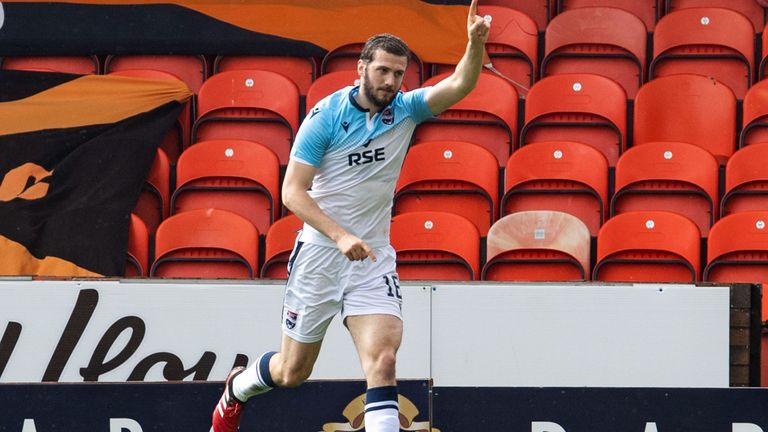 Ross County moved out of the bottom two in the Premiership with a battling 2-0 win over Dundee United at Tannadice.

The onus was on United, who take on Hibernian in the Scottish Cup semi-final next Saturday, to respond but they could not find their way past a resilient and determined Dingwall side.

It was County’s first win in six games in all competitions and with two league fixtures remaining, they are now in 10th place, one point above Kilmarnock and three ahead of bottom side Hamilton whom they host on Wednesday week.

The Terrors, safe from the drop, had turned in their best performance of the season last week in their 3-0 cup win over Aberdeen at Pittodrie and manager Micky Mellon kept an unchanged side looking to keep the momentum going.

The Staggies showed three changes with Stephen Kelly, Blair Spittal and Coll Donaldson returning at the expense of Keith Watson, Ross Draper and Billy Mckay and they had the best of a frenetic first half with White coming close when he headed over from close range.

In the 13th minute at the other end, Lawrence Shankland’s cross into the County box was blocked by left-back Leo Hjeld but appeals for handball were ignored by referee Kevin Clancy.

A minute later Spittal’s cross from the right almost sneaked in at the far post, tipped behind by Tannadice keeper Deniz Mehmet for a corner, from which he clawed the ball away under pressure with United escaping.

Then Kelly took a pass from Michael Gardyne but from an angle drove his shot into the side netting.

The opener, however, was impending and it arrived when Spittal picked up a Gardyne pass and from the byeline crossed for White to head back across Mehmet from 12 yards and into the corner.

A corner from the left was helped on by Jason Naismith and Iacovitti met the ball at the back post with a cushioned volley and it crossed the line before Mehmet unsuccessfully tried to keep it out.

Tannadice attacker Nicky Clark sent a free-kick from 25 yards over the bar but the home side could not get going.

On the hour mark Mellon brought on Peter Pawlett, Louis Appere and Logan Chalmers for Shankland, Marc McNulty and Ian Harkes and moments later Chalmers skimmed the bar with a curling shot from the edge of the box.

As the Taysiders dominated the ball, County stood firm and almost added a third.

White laid the ball back to Kelly whose shot was tipped on to the bar by Mehmet before substitute Regan Charles-Cook, on for Spittal, headed against the post from a tight angle.

Then Mehmet saved from White before County retreated to keep hold of three valuable points.

Dundee United take on Hibernian in the Scottish Cup quarter-finals, with the tie taking place at Hampden Park on Saturday May 8 at 4pm.

Meanwhile, Ross County face Hamilton at the Global Energy Stadium on Wednesday May 12, with the Scottish Premiership clash getting under way at 7.45pm.