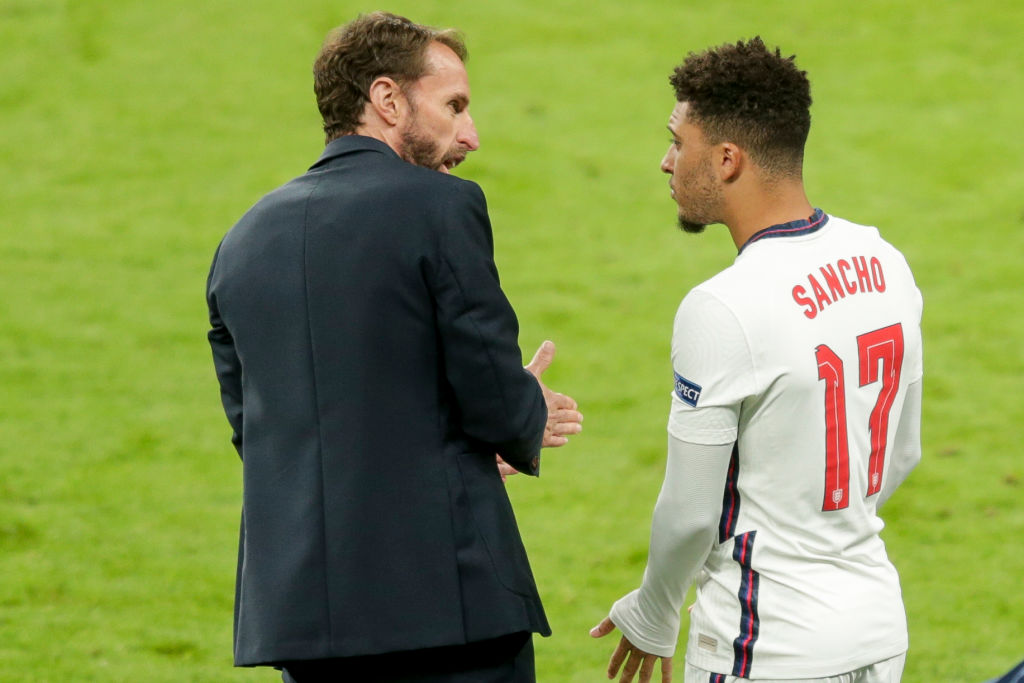 Gareth Southgate has handed Jadon Sancho a first start of Euro 2020 after Bukayo Saka picked up a slight knock in training, with England reverting to a back four against Ukraine.

After seeing off Germany in the last 16 on Tuesday night, the Three Lions are now in Rome – their only match away from Wembley should they make the final – to take on Andriy Shevchenko’s side in the quarter-finals.

The two teams are playing for the opportunity to take on Denmark in the semi-final on Wednesday, with the Danes beating Czech Republic 2-1 in the day’s early kick-off.

Despite an excellent display using a back three against Germany, Southgate has opted to return to the back four he preferred in the group stages and that has opened up an extra spot for an attacker, with Kieran Trippier the defender who makes way.

Sancho – who will undergo a medical and complete a move to Manchester United once the tournament is over – is the player who has been preferred, with Saka still carrying a small niggle and not fit enough to make the bench.

Despite a superb season with Borussia Dortmund, particularly since the turn of the year, Sancho has only played six minutes off the bench at Euro 2020 so far – and has not started a competitive match in 10 months – but Southgate feels he is the right man to exploit Ukraine’s left flank.

Speaking to BBC Sport before kick-off, Southgate explained: ‘He’s been really bright in training in the last 10 days or so. With changing to a back four also we feel to have a right-footer on that side to be able to really stretch the game. Ukraine look like they’re going to be five at the back and that width is really important.

‘It’s been a huge challenge for all of our attacking players, we’ve got so much depth. And of course you can’t keep everybody happy and we’re just looking for those moments where they’re really fighting in training, playing with aggression with the ball and he’s really shown that.

‘And as I say his profile for this game, we need one-against-one specialists in this sort of fixture, and he’s got that capability.’

Asked about Sancho’s inclusion, teammate Kalvin Phillips said: ‘He’s always been ready. He’s never not been ready. I think him training for the last three weeks, he’s shown that he’s ready. He’s shown what he can do in the Bundesliga and now he’s signed for Man United. So he’s a big name and I’m very happy for him tonight.’

Mason Mount, meanwhile, returns to the side having missed the games against both the Czechs and Germany after being required to self-isolate along with Ben Chilwell after a close contact with Scotland’s Billy Gilmour, who tested positive for coronavirus.

Southgate has also elected to start three players – Declan Rice, Harry Maguire and Phillips – who are all one yellow card away from a suspension, with benched midfielder Phil Foden also walking a disciplinary tightrope, while Jack Grealish must again settle for a role as an impact substitute.