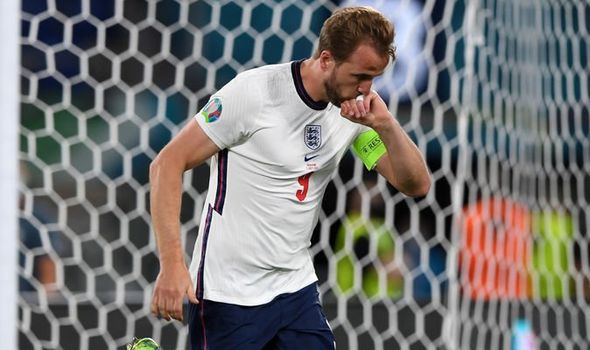 Harry Kane has told England’s Euro 2020 semi-final opponents Denmark that he is ready to lead the Three Lions into their first major final since 1966.

The England captain scored twice during their 4-0 demolition of Ukraine in Saturday’s quarter-final.

It was a performance that will be remembered for generations, with Kane’s goals being added to by Harry Maguire and Jordan Henderson.

Kane opened the scoring after just three minutes. The 27-year-old poked Raheem Sterling’s pass into the corner of the net.

Maguire then thumped home a header soon after the restart. The Manchester United defender had also scored in the World Cup quarter-final against Sweden three years ago.

Kane then scored two minutes later before Henderson scored his first goal for his country, heading in from a corner.

“There’s been a lot of talk around me and my performances but like I said I’m ready for the next game, to help this team to go to a European final,” Kane told the BBC.

“it’s always nice as a striker to score early in the game. It’s always a great feeling helping your team.

“So to perform like we did was top drawer. Another clean sheet, four goals, it was the perfect night for us.”

“We’re knocking it off step by step. Of course, the world cup was great but we fell short.

There was to be no hat-trick for Kane. He was withdrawn just after the hour with boss Gareth Southgate keen to preserve the Tottenham striker for Wednesday’s huge clash with Denmark.

Southgate’s side are still to concede a goal in their five matches at the tournament. Germany international Thomas Muller came closest to breaching the England defence during the Three Lions’ last-16 win versus their big rivals.

Kane has said that clean sheets are a key characteristic of his side.

He continued: “That’s what we’re building on, we’re not getting carried away. We’ve got a great unit working from front to back, working hard for the team.

“It’s a vital part of winning games and winning tournaments. Of course, we’ve got a big semi-final coming up but we’re on the right path.

“We’ll work hard, recover well and then look forward to the semi-final.”

England now have the chance to go one further than their semi-final at the World Cup in Russia. There, they lost 2-1 against Croatia.

Denmark, for all their talent, are a far more favourable opponent.

“More experience,” Kane said of the difference between the 2021 squad compared to the one in 2018. “A lot of us in the biggest of games for our clubs, Champions League, semi-finals, Premier League title races.

“So we’re looking confident out there and hopefully we can continue that.

“The job isn’t done yet, we’ve got a lot more football to play but like I said we’re on the right track.”

**We’ll be bringing you the very latest updates, pictures, and video on this breaking news story.

For the latest news and breaking news visit: /sport