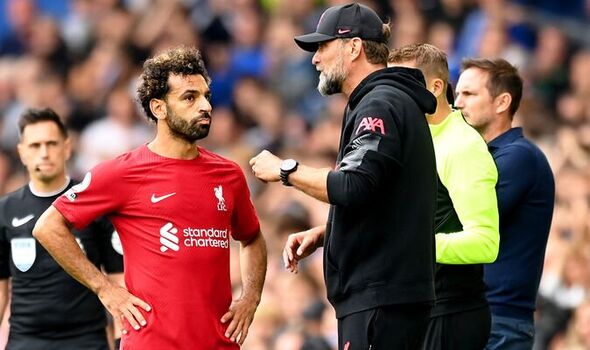 Goodison Park witnessed yet another Merseyside derby draw on Saturday afternoon with Liverpool and Everton both left frustrated in a goalless stalemate. Both teams hit the woodwork in the first half while Everton had a Conor Coady goal ruled out by VAR on 69 minutes. Express Sport looks at five things we noticed in the match.

It’s official – no fixture in the history of English top-flight football has resulted in more draws than this. This stalemate saw the Merseyside derby move level with Chelsea vs Manchester United on 25 draws. That it came at Goodison should be absolutely no surprise to anybody.

Goodison and derby draws are all too familiar by now – nine of the past 13 matches at this ground have ended level. Everton’s winless home streak against their neighbours goes on having not beaten Liverpool at home since October 2010 while the Reds’ hopes of first back-to-back wins at Goodison for 13 years ended in disappointment.

Jurgen Klopp went bold with his Liverpool line-up, recalling Darwin Nunez to the forward line and naming an attack-minded midfield with Harvey Elliott and Fabio Carvalho the two No 8s. Yet even still, it was a largely dull first-half punctured with only a few moments of quality – Tom Davies and Nunez almost producing wonderful goals.

Roberto Firmino’s half-time introduction improved Liverpool – and the in-form Brazilian was twice denied by Jordan Pickford after the hour – in a more enterprising second half from both sides, with Alisson forced to deny Neal Maupay and Dwight McNeil. But VAR overruling Coady’s finish meant there was nothing to separate the two teams once more.

The past few seasons, so much of Liverpool’s success has come down the right-hand side where Trent Alexander-Arnold and Mohamed Salah have combined to devastating effect. Six matches into this season, though the pair have both goals and assists to their names, it’s clear they are not as threatening as could or should be.

Salah has two goals and two assists in six Premier League matches there is no doubt that the Egyptian, particularly unstoppable in the first half of last season, is nowhere near as dangerous so far this term. He is being deployed far wider and less as an inside forward in a noticeable change of approach from Liverpool.

And Klopp will surely be concerned at how uninvolved Salah is for large periods of matches – even though he saw more of the ball after Firmino came on and almost netted a late winner if not for Pickford. Right now, Diaz appears a much more consistent threat throughout matches although he too could not find a goal having been denied by the post in the first half.

Alexander-Arnold, too, is struggling to impact matches in the way we’re used to seeing. He was substituted off here before the half-hour mark, having also been taken off early in the late midweek win over Newcastle. For Liverpool to put together the kind of winning runs they need to rival Manchester City, they need the pair back to their best and quickly.

Everton thought they’d broken the deadlock on 69 minutes when centre-back Coady – a boyhood Liverpool supporter – tapped in Neal Maupay’s low cross only for VAR to wreck the ecstasy of Goodison Park, much to the delight of the away end.

And the frustrations were too much for one supporter behind the dugouts and the press box as a half-full plastic bottle was launched towards the pitch from the top deck and landed in Klopp’s dugout.

The object was inches away from striking the Liverpool boss, who responded by turning round and producing a long stare up into the stands. You can imagine the gestures he got back from the Everton fans in response.