In Seville last Monday Jordan Pickford was firing decisive passes from the back to set up chances and fortify national confidence that England’s football evolution is genuine.

On Merseyside yesterday he was using his feet in a more traditional goalkeeping sense, saving another penalty at a crucial juncture and providing the platform for Everton’s dramatic late win.

It has been a perfect week for Pickford, whose cult status is growing for club and country. He kicked away Luka Milivojevic’s spot-kick on the hour, reacting sharply to the shot down the middle, and provoked a wave of passion at Goodison Park that eventually carried Everton to victory. 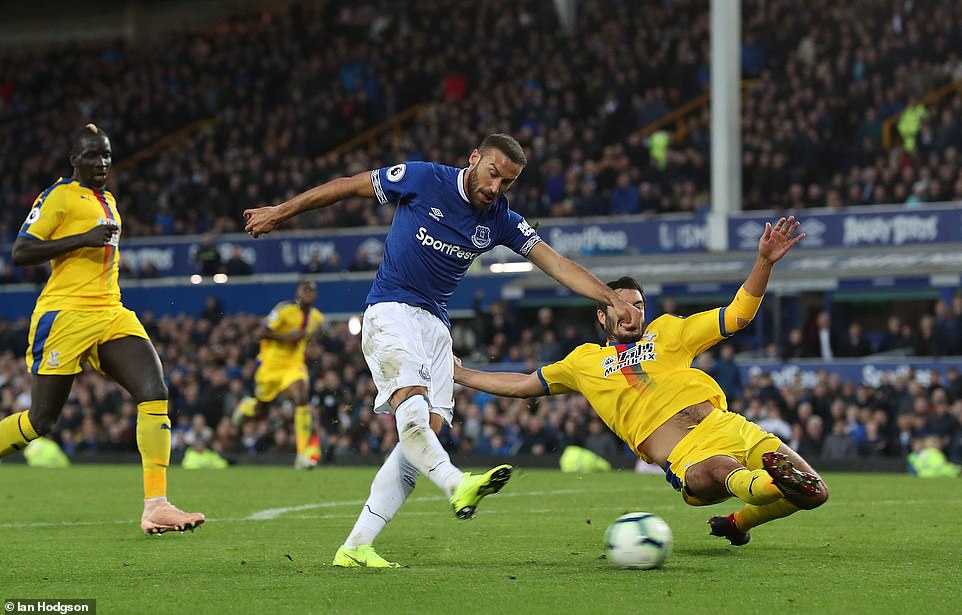 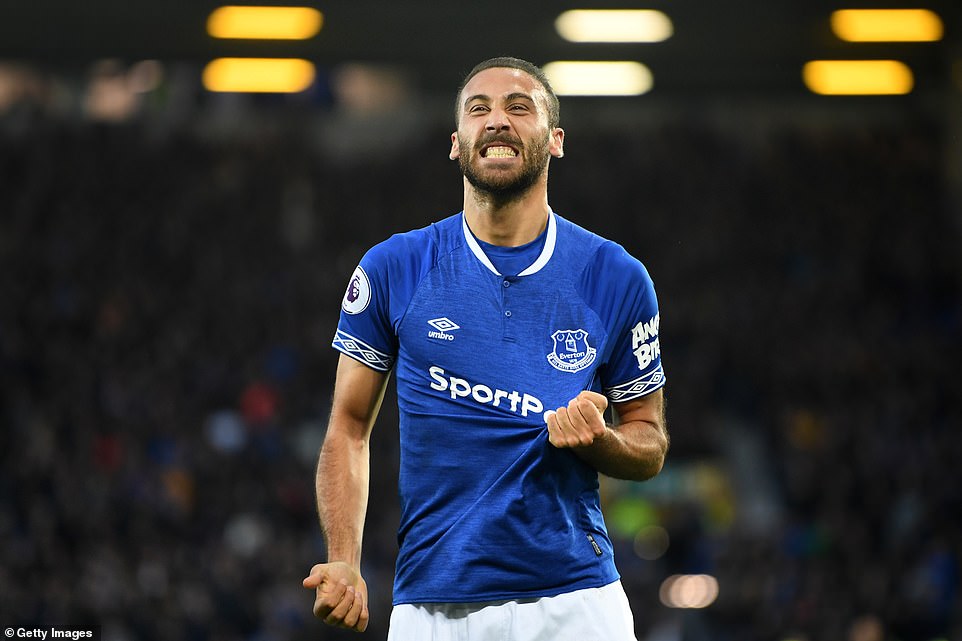 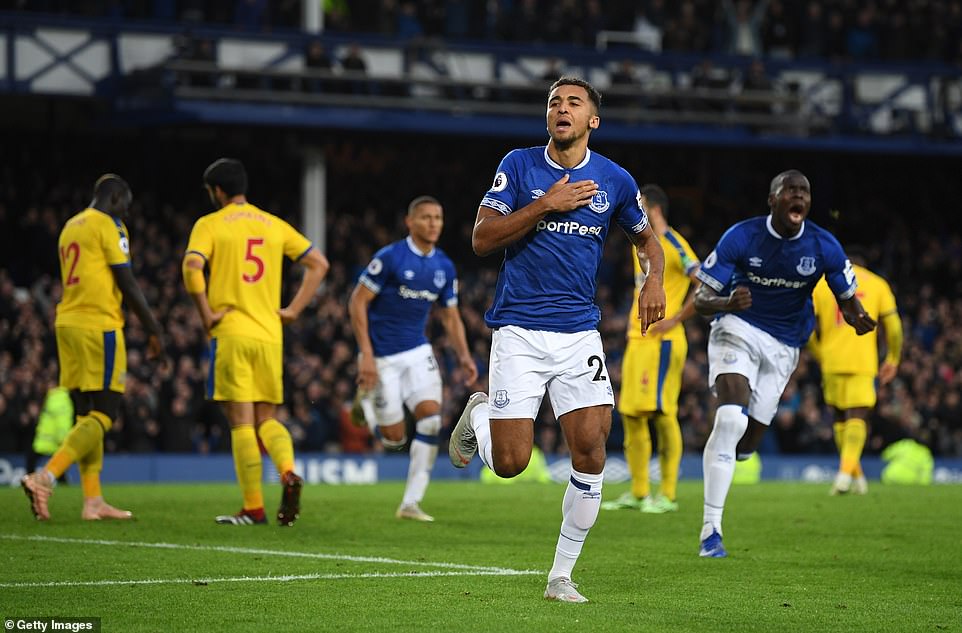 Calvert-Lewin had earlier given Everton the lead late on, opening the scoring with just four minutes remaining on Sunday 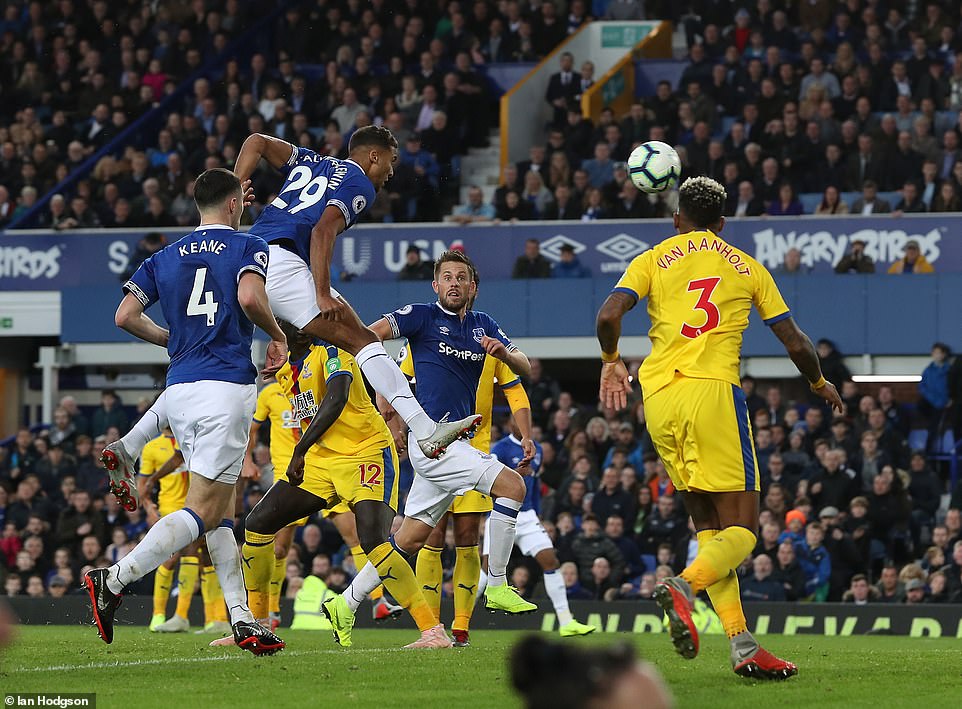 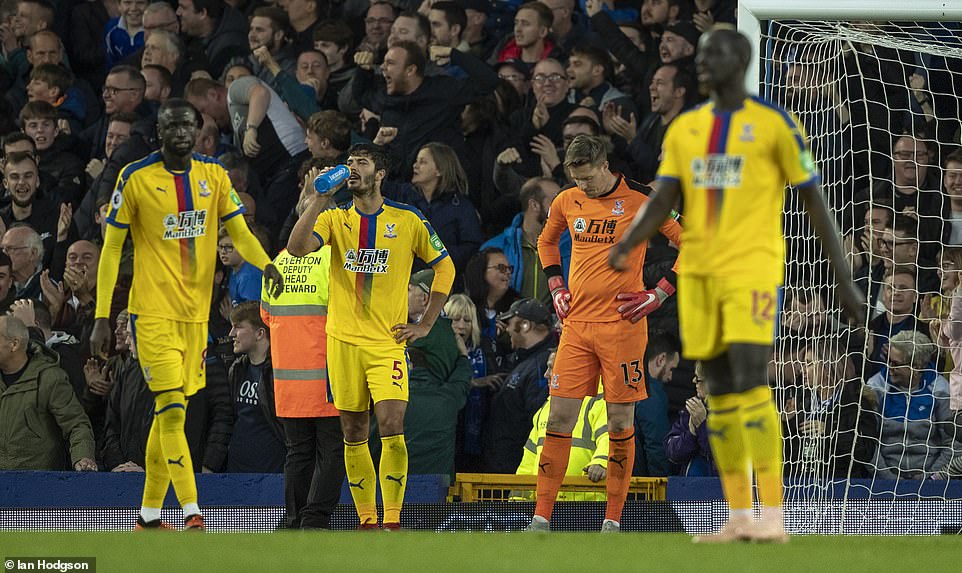 MAN OF THE MATCH: Gylfi Sigurdsson 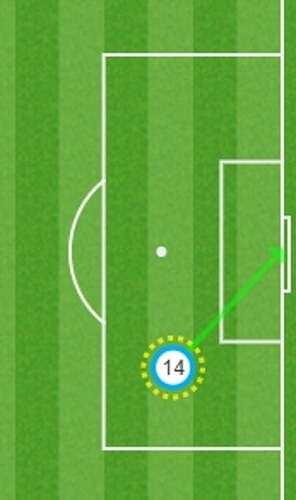 Everton super-sub Cenk Tosun broke through to double the lead and wrap up all three points against Crystal Palace. For more of Sportsmail’s fantastic MATCH ZONE feature, click here.

Marco Silva looked a genius as his three substitutes provided the concussive blows to Crystal Palace in the closing stages. On 82 minutes Everton’s manager sent on Ademola Lookman and Dominic Calvert-Lewin. On 87 minutes he was celebrating as the pair combined to open the scoring and lift the roof off this stadium.

Silva’s changes were in pursuit of victory and his team responded, pressing high to create space for Lookman, who produced a cultured cross that Calvert-Lewin headed in assuredly.

Two minutes later, Silva’s first substitute put the gloss on victory. Michael Keane’s clearance put Cenk Tosun in a race with Mamadou Sakho and the Turkish striker won comfortably, controlling the ball superbly then driving a finish between the legs of Wayne Hennessey. 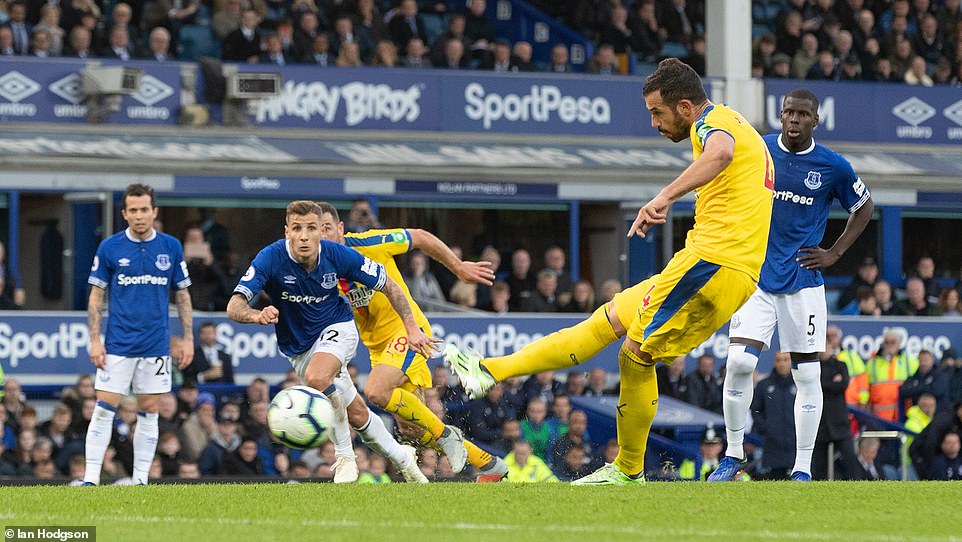 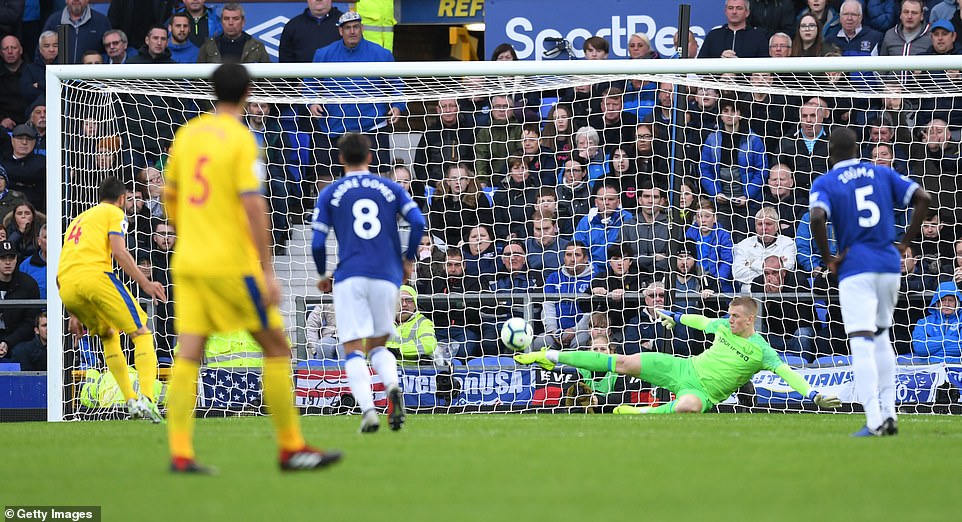 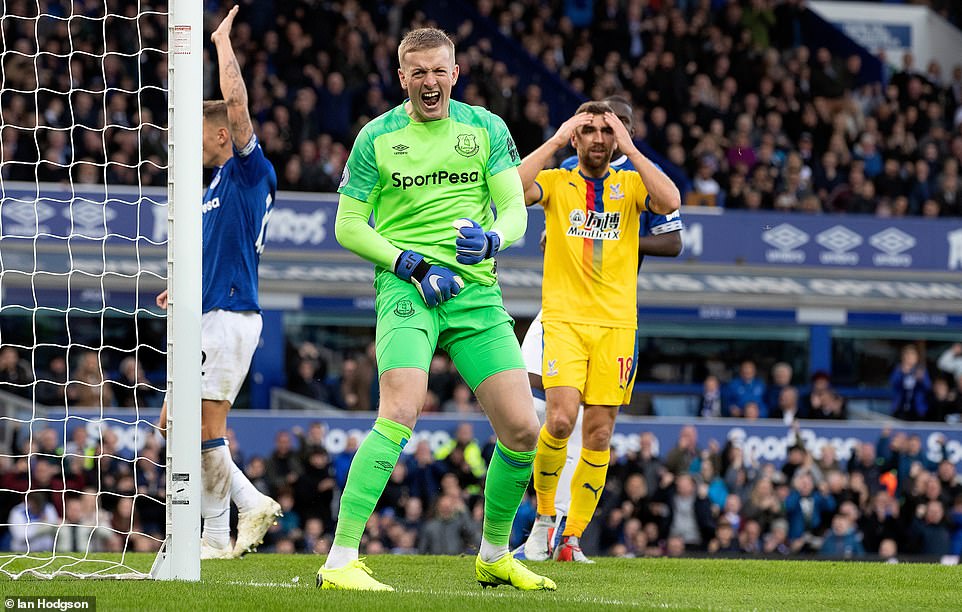 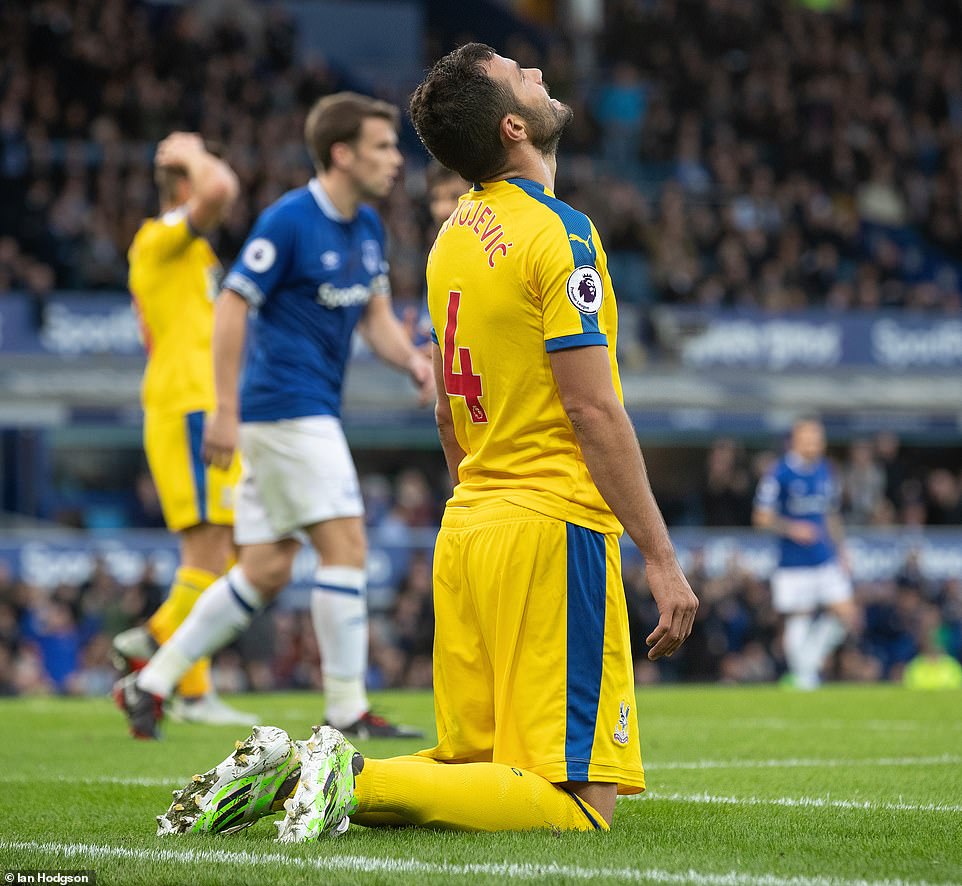 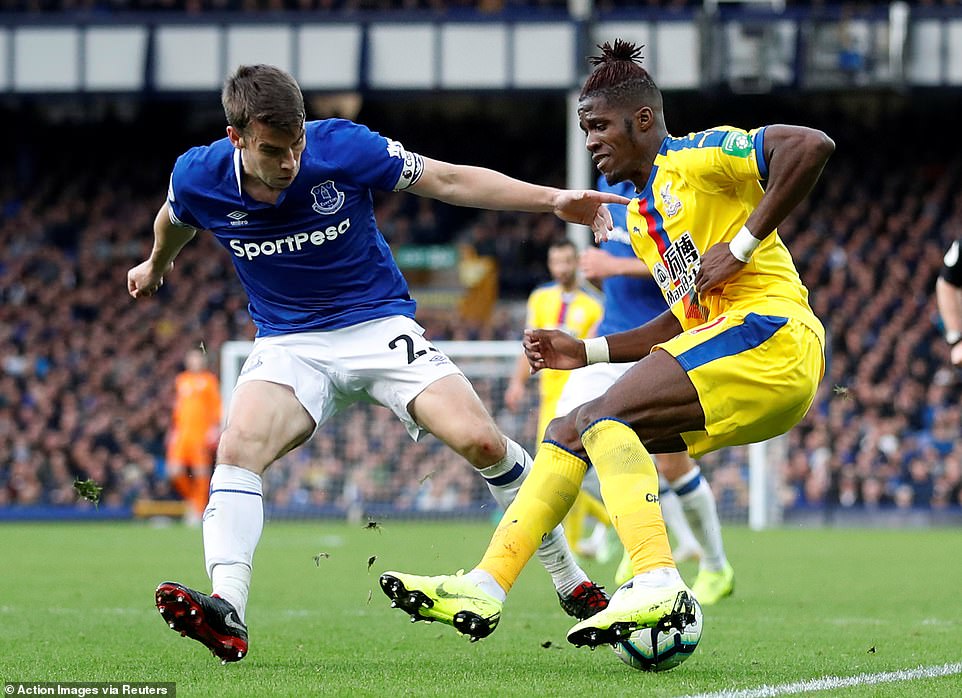 So it was a third Premier League win in a row to strengthen belief that Silva will get Everton where they want to be, even if this particular result might just as easily have finished in defeat.

It could have been another game where Wilfried Zaha’s influence brought his team three points. He won Palace’s penalty on the hour but it appears Milivojevic did not watch England’s World Cup shootout against Columbia. Had he done so he would have known that you go down the middle against Pickford at your peril. Carlos Bacca was foiled by Pickford’s strong arm in Moscow and here Milovejevic discovered the England goalkeeper can react just as effectively with his feet.

Pickford said: ‘I looked at his run up and he normally whips it, so I thought he was going to go keeper’s left. But I’ve left my right leg dangling and managed to get a foot on it. It was a game changer as it got the crowd going.

‘I don’t mind taking penalties but I don’t really practice saving them much. I do a bit of research. That’s it.’

Silva added: ‘He has this profile, he is solid, he can keep calm in that moment to take he right decision.’ 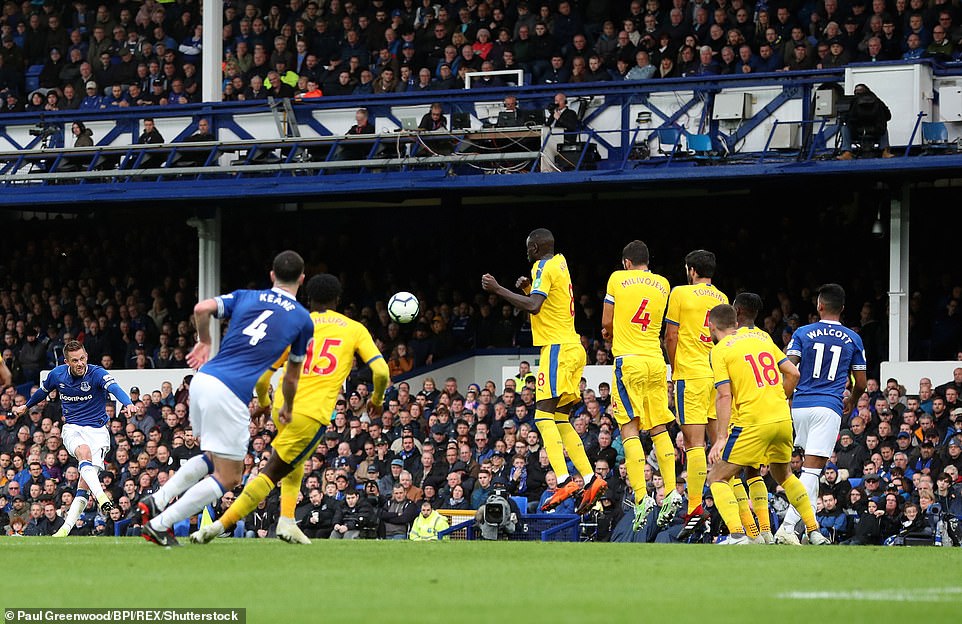 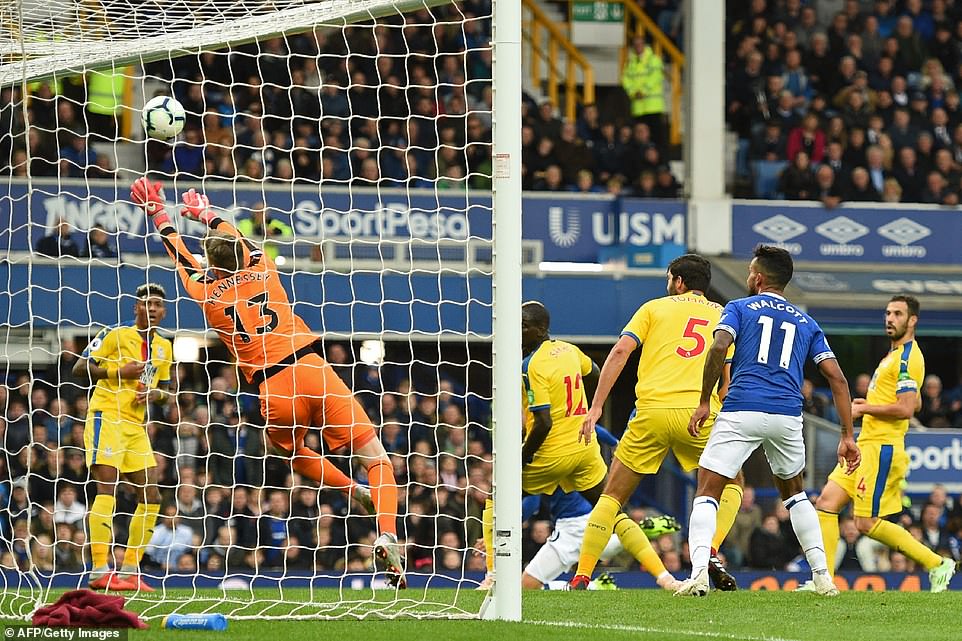 Silva’s work from the dugout was instrumental too. ‘Sometimes you change and everything goes well, sometimes you try and it is not the same,’ he said. ‘In that moment the most important thing was that we tried. We changed the formation. The three players came in and helped the team. This shows us everybody is ready to fight for his position.’

Roy Hodgson slumped in his chair at Pickford’s save. He knows a sliding doors moment when he sees one.

‘It’s hard to sit here as a loser again,’ Palace’s manager said. ‘I could easily be a winner or at least someone who has coached his team to a positive point.

‘The penalty made a difference. The crowd reacted and really gave them fresh impetus going forwards. The mood is very sombre because we were so close to a good result, and nobody could have begrudged us it.’

Palace have only scored five goals all season so Hodgson’s decision to start Zaha after a late fitness test was entirely understandable. Everton certainly set about examining just whether a hamstring injury picked up on international duty was fully healed. 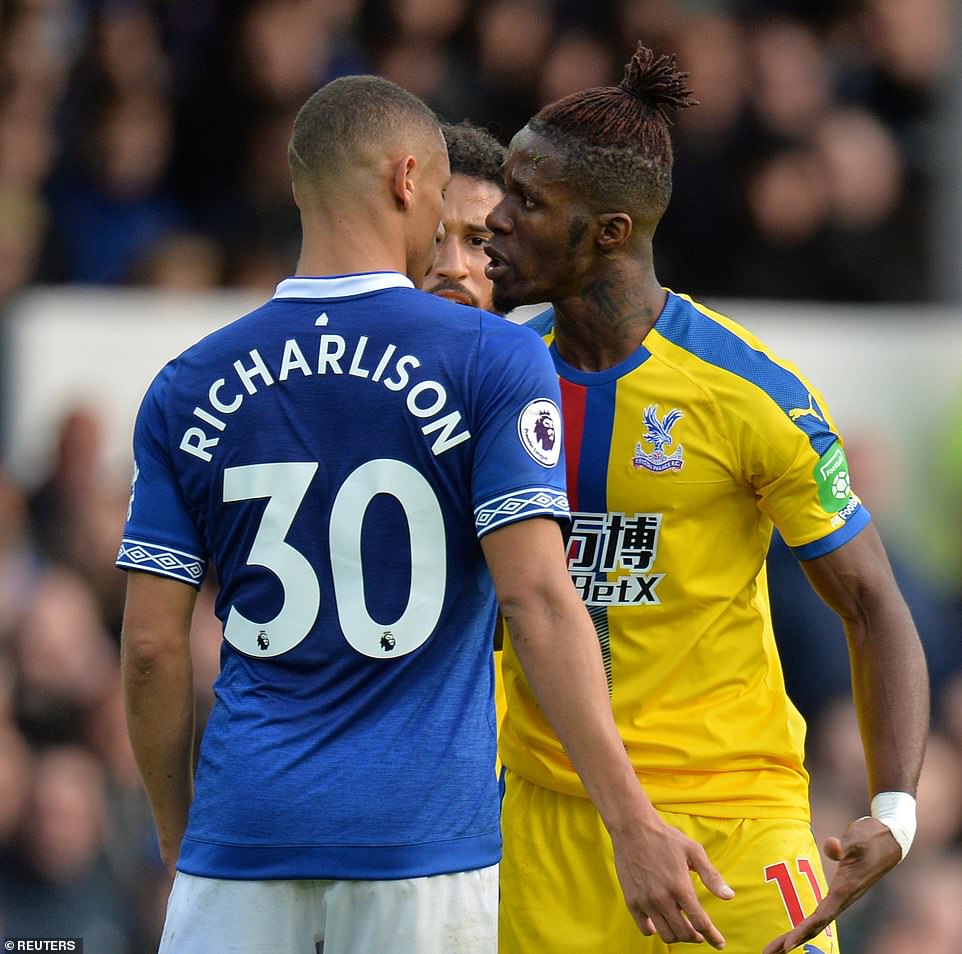 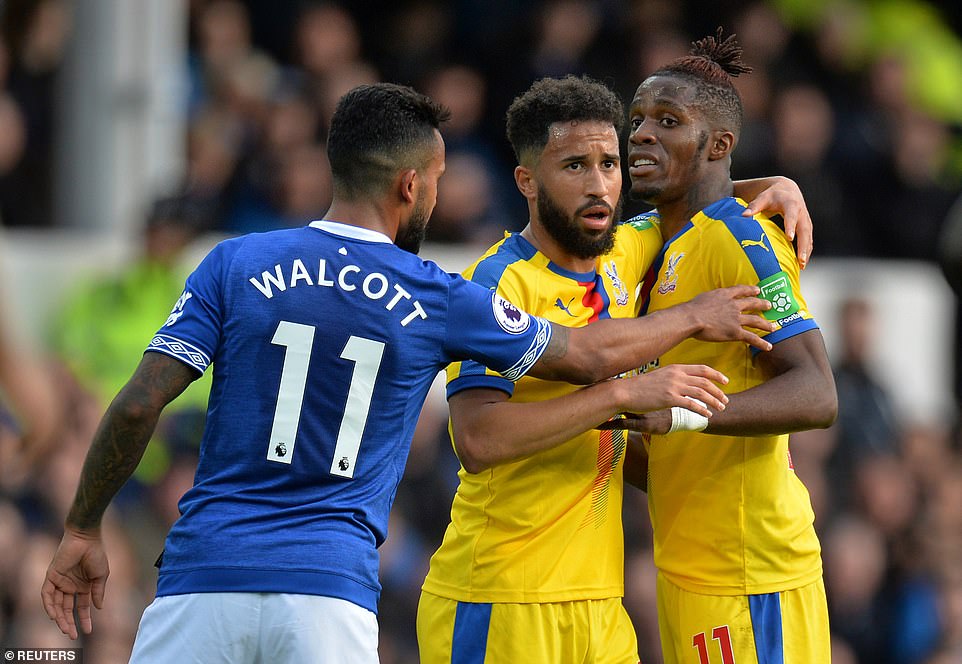 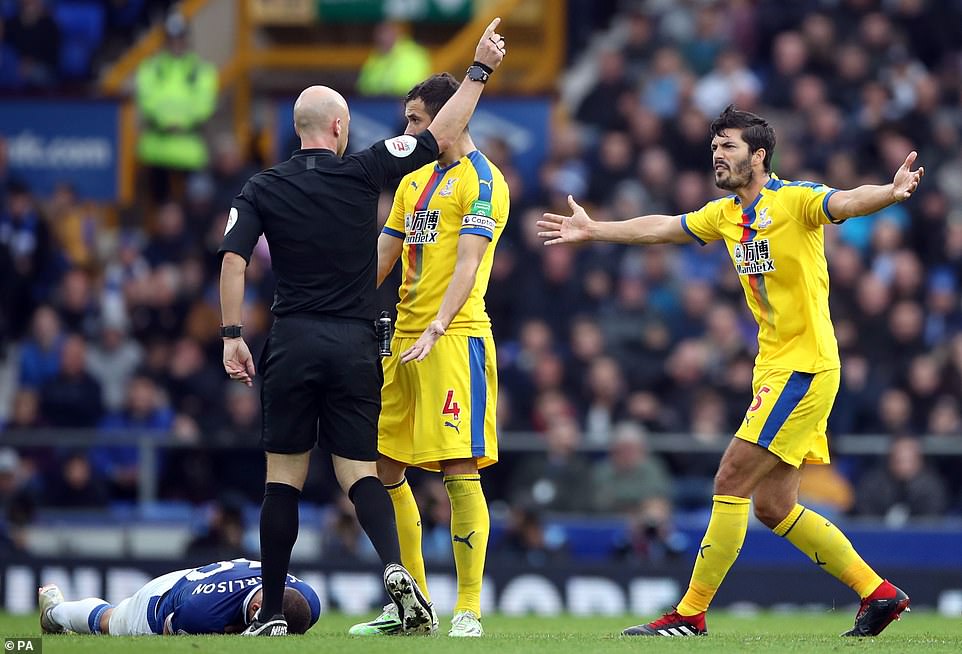 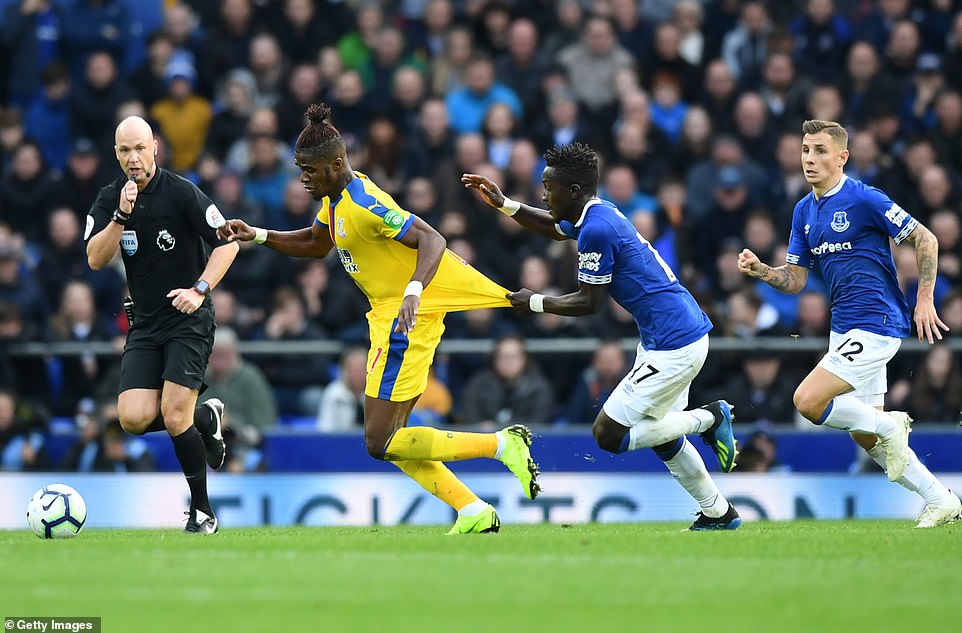 Zaha was fouled four times in the first half and when the last of those went in Hodgson blew his lid at the fourth official. Kurt Zouma had come through the back of Zaha but Anthony Taylor kept his cards in his pocket.

Still, it gave Milivojevic his first dead ball chance and the Palace captain struck an excellent free-kick that bounced just in front of Pickford, so his push round the post was well measured.

From Andros Townsend’s corner James Tomkins nodded back and Cheikhou Kouyate stretched his 6ft 3in height with a giant leap to head towards goal. The arc of the ball was inches too high for Pickford’s extended arm but it was not too low to avoid the bar and Everton scrambled the rebound behind.

To that point Silva’s side had been in charge. Andre Gomes, making his Everton debut, was adding extra creativity from central midfield and Seamus Coleman, back in the team after missing six weeks, was providing thrust down the right. 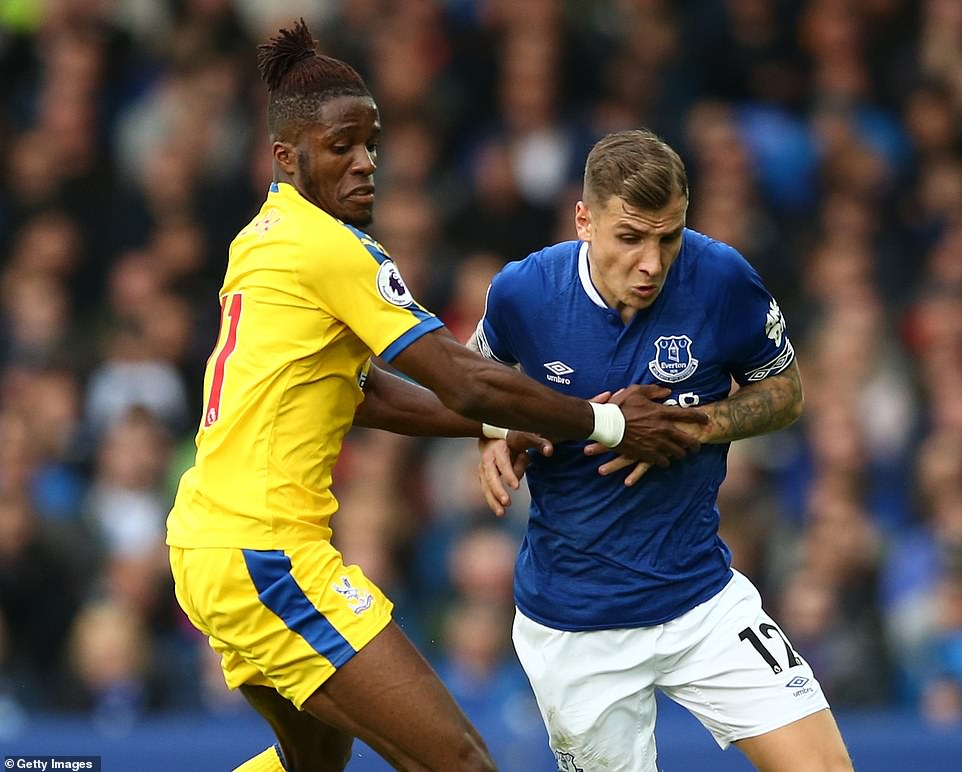 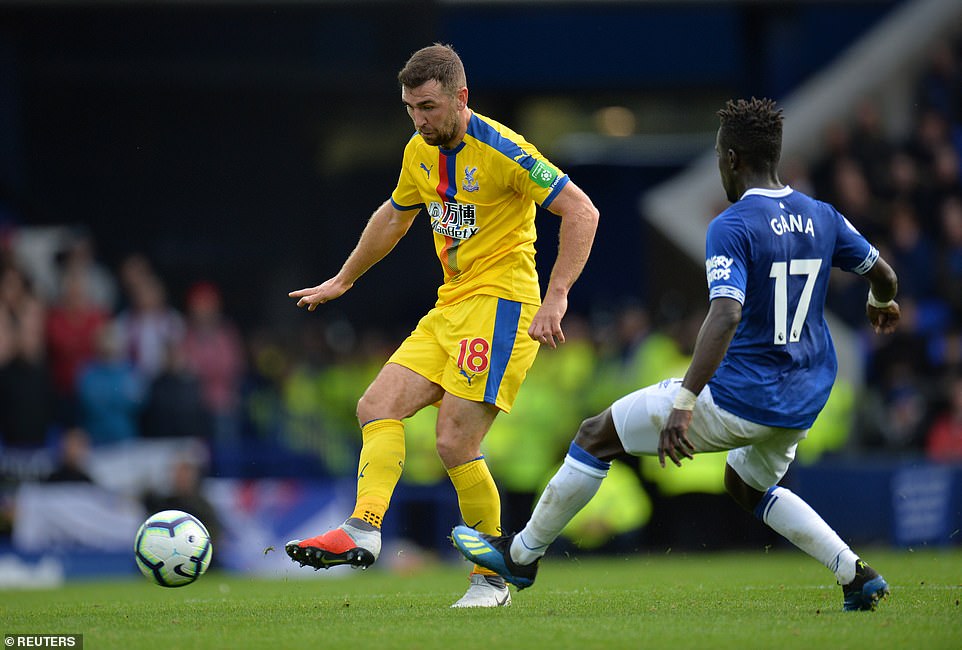 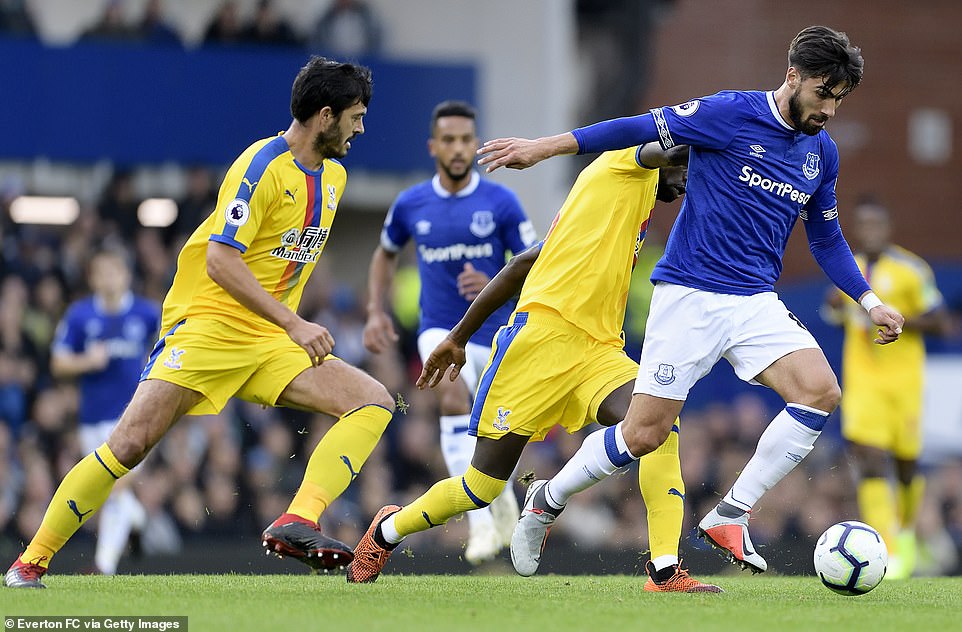 It was from that avenue that Everton’s best chance of the half arrived. Gylfi Sigurdsson rolled the ball out to Coleman, and followed up with a run into the box. Coleman found him with the pull back and Sigurdsson clipped a smart finish towards the top corner, only for Hennessey to make a good save.

The threat of Zaha always loomed though and on the hour his quick feet brought Palace their penalty. Coleman couldn’t resist the temptation to try a tackle as Zaha dribbled his way into the box but he was a moment too slow and clipped his adversary’s standing leg just as he cut back. Everton protested but the contact was enough to make Zaha fall over and Taylor had made the right call.

Unfortunately for Palace, Milivojevic failed to convert and from there Everton grabbed the initiative.

Two minutes later it was Hennessey’s turn to save with his legs when Sigurdsson set Theo Walcott clear. But late in the game Walcott’s replacement delivered.