Everton owner Farhad Moshiri is said to be ‘seriously considering’ appointing Rafa Benitez as Carlo Ancelotti’s replacement. The Blues are looking for a new manager after Ancelotti left to take charge of Real Madrid – and the man who led Liverpool to their 2005 Champions League triumph has emerged as a shock contender, despite having once described the Goodison Park outfit as a ‘small club’.

Benitez has apologised to Everton supporters for that comment, as he confirmed he would be interested in the vacant manager’s job.

The 61-year-old won the FA Cup and UEFA Super Cup with Liverpool, as well as guiding the Reds to Champions League glory courtesy of their famous comeback from 3-0 down against AC Milan in the final in Istanbul 16 years ago.

He has since won trophies with Inter Milan, Chelsea and Napoli, as well as managing Newcastle and Chinese Super League club Dalian Professional.

And according to The Mirror, Benitez is a serious contender for the manager’s job at Everton – despite the potential to cause dissent among the club’s fanbase. 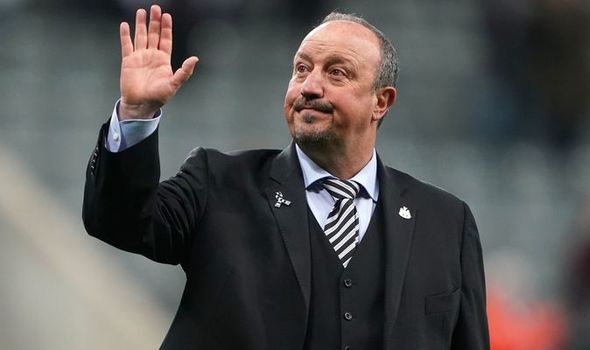 Everton’s majority shareholder Moshiri is said to be strongly pushing for the Spaniard as director of football Marcel Brands talks to candidates in the coming days.

The club have so far hit obstacles in their search for a new manager, with top two candidates David Moyes and Nuno Espirito Santo both proving elusive.

Nuno is believed to have priced himself out of the Crystal Palace job with some extreme demands which included bringing six members of staff with him, and a role for his agent Jorge Mendes looking after transfer business.

Those demands are now leading Moshiri to have second thoughts over the former Wolves manager, while Everton are said to be reluctant to mar their close relationship with West Ham by trying to tempt ex-boss Moyes back to Goodison.

Talks are likely to take place with Benitez this week, although there are some concerns that Benitez could not win over fans over after branding Everton a “small club” following a Merseyside derby draw back in 2007.

Benitez fell out with his owners at Liverpool, Newcastle, and even Valencia where he made his name, but Moshiri is believed to be impressed by his track record.

Former Blues boss Roberto Martinez is also on the short-list compiled by Brands. His time in charge of Everton ended badly, but he has impressed in guiding Belgium to the top of the FIFA rankings, and would be interested in a return to Merseyside.

Christophe Galtier is also likely to be contacted by Brands in the coming days, having stepped down as Lille boss days after leading them to a historic Ligue 1 title triumph.

Brighton boss Graham Potter is an outside contender, while Moyes remains a favourite with Moshiri – but Everton would not make an approach unless they were given permission to speak to him by West Ham.