Football Federation Australia has stood down 70 per cent of its staff in a desperate attempt to stay afloat amid the coronavirus crisis.

Following the lead of most other sporting organisations, FFA announced the measures on Friday morning, three days after the A-League season was officially put on hold. 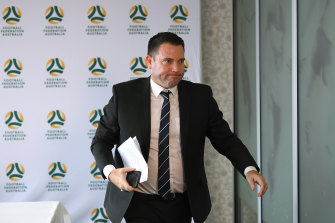 FFA chief executive James Johnson has announced 70 per cent of the organisation’s workforce has been stood down.Credit:AAP

FFA will continue to operate with a "small team", chief executive James Johnson said, with a focus on engaging with fans through digital platforms and supporting state federations, clubs and participants.

Johnson said it was an "extremely difficult decision" to make but one that was necessary to ensure the governing body has a hope of surviving the next few months.

"We are in a situation where grassroots football and the Hyundai A-League are currently suspended, we’ve had the postponement of the 2020 Tokyo Olympics and the deferral of the international football calendar, so virtually all football activity has now ceased for the foreseeable future because of COVID-19," Johnson said in a statement.

"These developments impact many forms of revenue for FFA, including national registration fees, broadcast fees, sponsorship, ticket sales and government funding, so we have needed to adjust our operations to ensure that we can remain operational, forcing us to take the unfortunate decision to stand down approximately 70 per cent of our workforce.

"We have an incredible team here at FFA, and I am immensely proud of the work everyone does for football in this country. We have explored ways to retain as many staff as possible, including reducing essential roles to part-time, and asking staff to take annual leave and long service leave. Unfortunately, a number of staff members will have a period of leave without pay."

Some A-League clubs have already begun to reduce their staffing levels, with owners engaged in rolling crisis talks as they try to map out a future for the professional game, which will be under threat if Fox Sports seeks to renegotiate or tear up its broadcast deal, which has three more seasons to run.

"We view this as a temporary stoppage of football," Johnson said.

"We will be continually reviewing the situation and the impact of COVID-19 on grassroots football and the remainder of the Hyundai A-League season. We need a strong national governing body in place and a team ready and able to get back to work as soon as possible, as football will play an essential role in the recovery of our nation post COVID-19."