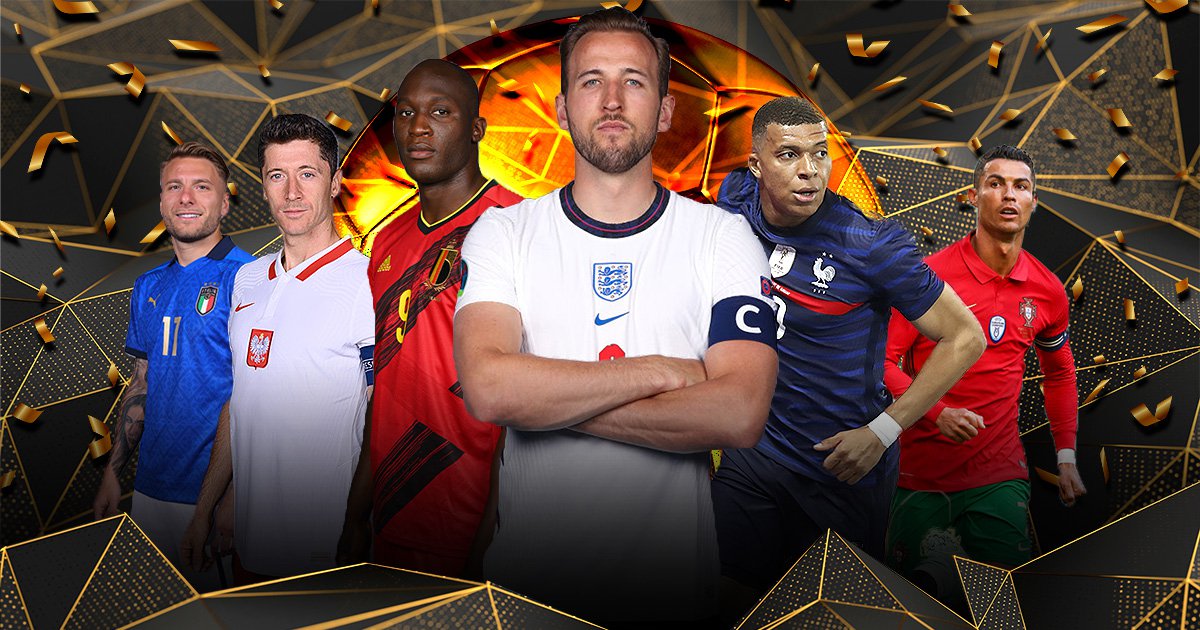 Harry Kane will be looking to land a second successive Golden Boot in a major international competition following his success at the World Cup in Russia three years ago, but the England captain faces stiff competition from some of the top strikers in world football at this summer’s tournament.

Tottenham’s talisman may have plenty of transfer speculation surrounding his future in north London, but when it comes to finding the back of the net, there aren’t many who hold a torch to the prolific striker.

Kane scooped the Golden Boot at the 2018 World Cup in Russia with his six goals helping the Three Lions reach the semi-finals, while he has won the Premier League iteration of the award three times – including last season.

Despite his immaculate goalscoring record for club and country, the 27-year-old is yet to win a major trophy, with this summer’s rescheduled European Championships as good a time as any to break that duck.

The problem he faces is that Europe’s most revered strikers will also be competing for the Henri Delaunay Trophy, as well as the Golden Boot. Kane is considered one of the favourites to win the individual award, and Metro.co.uk take a look at those who could upset the apple cart.

Mbappe has risen to stardom quicker than Usain Bolt can run the 100m. The forward put his name up in lights as a record-breaking teenager when he fired France to World Cup glory in 2018.

Not only did he become the youngest Frenchman to score at the tournament, but he also put himself in esteemed company in Russia by becoming just the second teenager after Brazil icon Pele to score in a World Cup final.

Now 22, Mbappe has already won Ligue 1 four times – with Monaco and Paris Saint-Germain – and along with Karim Benzema and Antoine Griezmann, will terrorise defences for Les Bleus this summer.

Recent Form: Despite PSG’s shocking failure in losing out to Lille in the Ligue 1 title race, Mbappe finished the season as the top scorer in France’s top flight for a third consecutive campaign with 27 goals in 31 games.

International record: Mbappe has 17 goals in 44 France appearances, with four of those coming in Russia in 2018.

How far will France go: Didier Deschamps’ tournament favourites have a tough group including Germany, Hungary and reigning Euros champions Portugal. Despite that, anything other than getting to the final would likely be considered a failure for France.

Romelu Lukaku has been deemed good, but not good enough, for much of his career. The Belgium international first joined Chelsea at the age of 18 from Anderlecht, but hardly featured over his three-year spell at Stamford Bridge.

Following a successful spell at Everton, he got his big-money move to Manchester United, however, yet again, he was cast away, this time by Ole Gunnar Solskjaer.

Now at Inter Milan, Lukaku is thriving. The 28-year-old bagged 24 Serie A goals to fire the resurgent Italian giants to their first Scudetto in 11 years.

Recent form: Lukaku has been in unstoppable form for Inter, while he also goes into this summer’s tournament having netted in Belgium’s final warm-up game against Croatia. His tally of 24 league goals in the 2020/21 Serie A campaign was only beaten by another man on this list: Cristiano Ronaldo, who netted 29 times.

International record: The formidable striker is Belgium’s all-time leading goalscorer by some way, with 60 goals. Real Madrid’s Eden Hazard is far behind in second on 32.

How far will Belgium go: In a group with Denmark, Finland and Russia, Belgium will be severely unlucky not to qualify for the knockouts, and they are widely tipped to go deep into the competition.

There are no conversations about goalscoring awards that don’t include football icon Cristiano Ronaldo. A giant of the game, often pitted up against Barcelona’s Lionel Messi as the GOAT (Greatest of all time), Ronaldo has essentially won everything the sport has to offer.

Recent form: The 36-year-old took home the Capocannoniere (Serie A Golden Boot) for the 2020/21 season, scoring 29 goals in 33 games. Ronaldo also netted in Portugal’s 4-0 friendly against Israel on Wednesday to take his astronomical record to new heights.

International record: The recent goal against Israel was his 104th for Portugal, as he stepped ever closer to reaching the ultimate milestone of becoming the top all-time international goalscorer.

How far will Portugal go: The reigning champions have a squad packed full of talent and experience, with the likes of Joao Felix and Diogo Jota complemented by veterans such as Ronaldo and Pepe. They too have been drawn into the toughest group in the tournament with Germany, France and Hungary, but should fancy their chances of getting to the quarters or semis.

Lazio’s Ciro Immobile will have a chance to showcase his Golden Boot credentials in the opening fixture of the tournament as Italy go up against Turkey on Friday night. The 31-year-old striker has scored goals for fun in Serie A and despite having a relatively modest total for his country, he should still be considered a nominee for the award.

Recent form: Immobile reached a miraculous total of 36 goals in 37 Serie A games in the 2019/20 campaign, and though he wasn’t able to match that last season, he still managed to net 20 times. The striker will lead the line for Roberto Mancini’s reinvigorated Italy, who are on a 27-match winning streak coming into the tournament.

International record: Compared to the others in the list and given his age, Immobile is far behind having only scored 13 times in 46 games. But three of those goals have come in 2021, including in Italy’s 4-0 victory over Czech Republic last Friday.

How far will Italy go: Despite not having a squad filled with stars akin to France, England and Portugal, Mancini’s side are savvy, and the four-time World Cup winners could find themselves in with a shot of winning the Euros for a second time.

Robert Lewandowski was extremely unlucky not to have been awarded a maiden Ballon d’Or for his unbelievable individual performances in 2020. The 32-year-old registered a mammoth 55 goals across all competitions in the 2019/20 campaign but the pandemic denied him of that opportunity, with the award cancelled.

Recent form: Lewandowski kept up his fine goalscoring record, netting a near ridiculous total of 41 Bundesliga goals as Bayern stormed to a ninth league title. Many feel Lewandowski is the best striker in the business along with Kane, and he has a chance to prove it this summer.

International record: The No.9 is unsurprisingly Poland’s leading scorer of all time on 66 goals in 119 games.

How far will Poland go: Poland are one of the dark horses in the tournament and will be hopeful of getting out of their group, which includes Spain, Slovakia and Sweden. Their success, though, may be based on how many goals their star man can plunder.