Things can get explosive when Manchester United and Liverpool face off. The relationship between English football’s biggest clubs has often been troubled on and off the pitch.

When they come together as partners, the impact has been even more sensational and far-reaching. The latest manifestation of this unholy alliance came last week with the doomed Super League adventure. The teams meet at Old Trafford on Sunday in the Premier League and most of those involved in the domestic game wish they could both lose. The clubs have made a lot of enemies this month.

“The smell from the stigma cast upon football will permeate the air for many a day.” Those words could have been written last week but they were penned about another conspiracy involving United and Liverpool, one that the local paper added was “the worst blow football has had.” In April 1915, players from the clubs colluded to throw a game that kept United from being relegated. It was a badly botched attempt at a betting coup, too. Money, as always, was at the dark heart of the plot.

Proceedings were almost as farcical as the meltdown of the Super League breakaway group. Even the referee thought the match was bent. Bookies refused to pay out and eight players were eventually banned for life – some were later pardoned. But United stayed up, at the expense of Chelsea and Tottenham Hotspur.

The ramifications were long-lasting. After the season, league football was suspended until the end of the first world war. By the time it resumed in 1919, John McKenna, Liverpool’s first manager and former chairman, was president of the Football League. The first division was expanded from 20 to 22 clubs, which meant Chelsea were saved. Tottenham’s fate was less edifying. They remained relegated. Arsenal, who had finished in fifth place in the second division when the sport was interrupted by the global conflict, were awarded a place in the top flight. The Gunners had only moved from south London to Highbury in 1913. The anger at White Hart Lane could not have been deeper and still remains.

Five of today’s so-called Big Six were caught up in one of the game’s big convulsions. At the centre of the politicking was McKenna, a scion of the Anfield boardroom whose nickname was ‘Honest John.’

In many senses not much has changed. Money and power manipulated the direction of the game. The phrase ‘sporting integrity,’ bandied around so frequently last week, never had quite as much historical foundation as everyone likes to believe.

Everton were understandably – and rightly – outraged at the notion of the Super League.  It is easy to forget at Goodison that they were part of the clique the last time United and Liverpool teamed up to force a change to the direction of football. When Everton were part of the ‘Big Five’ cabal that plotted to form the Premier League in 1991 they were not thinking about the greater good. Self-interest ruled then. It still does.

John W Henry will never inherit the sobriquet ‘honest’ given to McKenna. Liverpool’s principal owner is no closer to judging the mood of the supporters than he was when he bought the club 11 years ago. His collusion with Joel Glazer over Project Big Picture and the Super League has raised eyebrows at both Anfield and Old Trafford. Henry’s relationship with Ed Woodward, who resigned as executive vice chairman of United last week, was far more productive than with the majority of the Boston-based billionaire’s own executives. Perhaps productive is the wrong word, considering they collaborated on two failed endeavours. 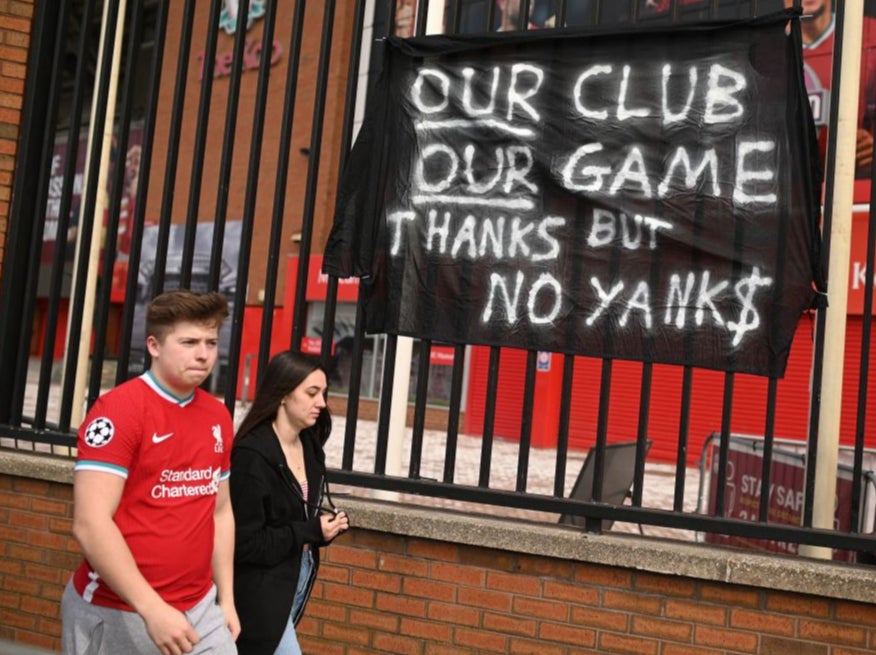 Yet Henry has been upfront about his fears for the game as long as he has been involved in football. His dread at the thought of Manchester City and Paris Saint-Germain dominating with state-backed resources has been palpable. Wednesday’s Champions League semi-final first leg was a distillation of all his nightmares. Terror of City, in particular, drove him into the arms of Glazer.

Henry will be familiar with the words of Rahm Emanuel. “Never let a serious crisis go to waste,” the former mayor of Chicago said. The pandemic offered an opportunity to reset the game and come up with a financially coherent way forward. Project Big Picture was the 71-year-old’s blueprint for the future. It failed because it was tone deaf to the concerns of fellow top-flight clubs and when the moment came for someone to advocate for the plan and suggest compromises, Henry withdrew to his bunker. Glazer likewise failed to put his reputation – for what that is worth – on the line. Both turned to the worst idea they could have embraced: the Super League.

So where does it leave United and Liverpool when they meet for what has been for so long the most anticipated fixture in English football? The clubs have surrendered huge amounts of goodwill. Research has shown – and the Premier League’s strategic review is said to back up the studies – that television viewers tune in to this game in huge numbers. Will the appetite remain or will the reputational damage inflicted by the wanton disregard for public opinion have an adverse impact?

Certainly, United and Liverpool have ceded their position of leadership and influence within the sport. That goes way beyond losing their seats on committees at the Premier League and Uefa. It will take years, possibly decades, to rebuild trust.

The absence of supporters might, just for once, be a good thing on Sunday. United have re-ignited anti-Glazer anger. Henry and Fenway Sports Group will have to deal with the latent suspicions of a fanbase soured towards American owners by the Hicks and Gillett years.

In the meantime City – and to a lesser extent Chelsea – have been allowed to position themselves as the good guys. After the failure of Uefa’s Financial Fair Play regulations, there needs to be a real debate on spending. The chances of that happening are remote. It does not help, either, that City and Chelsea are playing by far the best football in the Premier League – and maybe even Europe. United and Liverpool, who, after all, are two of the richest clubs in the world, look like whingeing underachievers trying to assert their traditional privilege in the face of more dynamic and successful competitors. There is an element of truth in this argument.

In theory, when United and Liverpool come together, they should be an unstoppable force. They have been before. Henry and Glazer screwed this one up so badly that they must wish they could go back to being enemies.