One of the biggest crowds in Australian soccer history – 36,128 – flocked to the MCG yesterday to watch Juventus of Italy fight back and draw 1-1 with Australia. 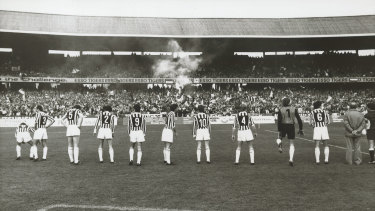 Juventus players line up before their match against Australia at the MCG.Credit:Geoff Ampt

A crowd of about 105,000 was at the MCG when Yugoslavia and the Soviet Union met in the final of the 1956 Olympic soccer tournament, but most spectators were there for the Games closing ceremony which followed the match.

Most of the fans who turned up yesterday came to watch Juventus, which featured five of the players who helped Italy win the 1982 World Cup in Spain.

They waved Italian national flags and the black and white colors of Juventus, and they chanted “Juve, Juve” until Australia’s performance brought the best from the Socceroos’ fans as well.

“We are the champions,” they chanted, as Australia led 1-0 until 13 minutes from the end, when Juventus came back to make a draw of a match marred by fisticuffs.

Paolo Rossi, voted world footballer of the year in 1982, was beaten so thoroughly by his opponent, David Ratcliffe that the crowd started to boo the man who had come to Australia as their hero.

The match was part of a 20-game series of international soccer, also featuring Nottingham Forrest and Manchester United of England, Glasgow Rangers of Scotland, and Iraklis of Greece.