In the week that Manchester City’s war footing with Uefa was exposed in incredible detail, one of the governing body’s referees at least looked favourably on Pep Guardiola’s side with one of the most farcical decision of this, or any other, Champions League seasons.

Gabriel Jesus scored a hat-trick as the English champions, beating Shakhtar Donetsk 6-0, edged closer to the next stages of the competition their supporters love to hate, although it was a surreal refereeing mistake that was the most memorable feature of a routine evening.

Unfortunately for Shakhtar, defender Mykola Matviyenko was within two or three yards of Sterling and judged to have played a part in his fall – a decision that looked worse on every subsequent replay.

Given the depth of City’s disputes with Uefa, particularly over their controversial financial fair play regulations which have been exposed in a German publication this week, such a monumental mistake was ironic.

But at least Guardiola had the good grace to acknowledge it, actually remonstrating vociferously with the fourth official and pointing out the error.

It would have been kinder for Sterling to have followed suit and confessed the referee’s mistake but, back in the real world, it was instead left to Jesus who stuttered in his run-up, wrong-footing the keeper and converting the penalty comfortably.

The City supporters booed the Champions League anthem before kick-off, lustily and in keeping with recent tradition, although their players quickly showed their willingness to embrace the competition. 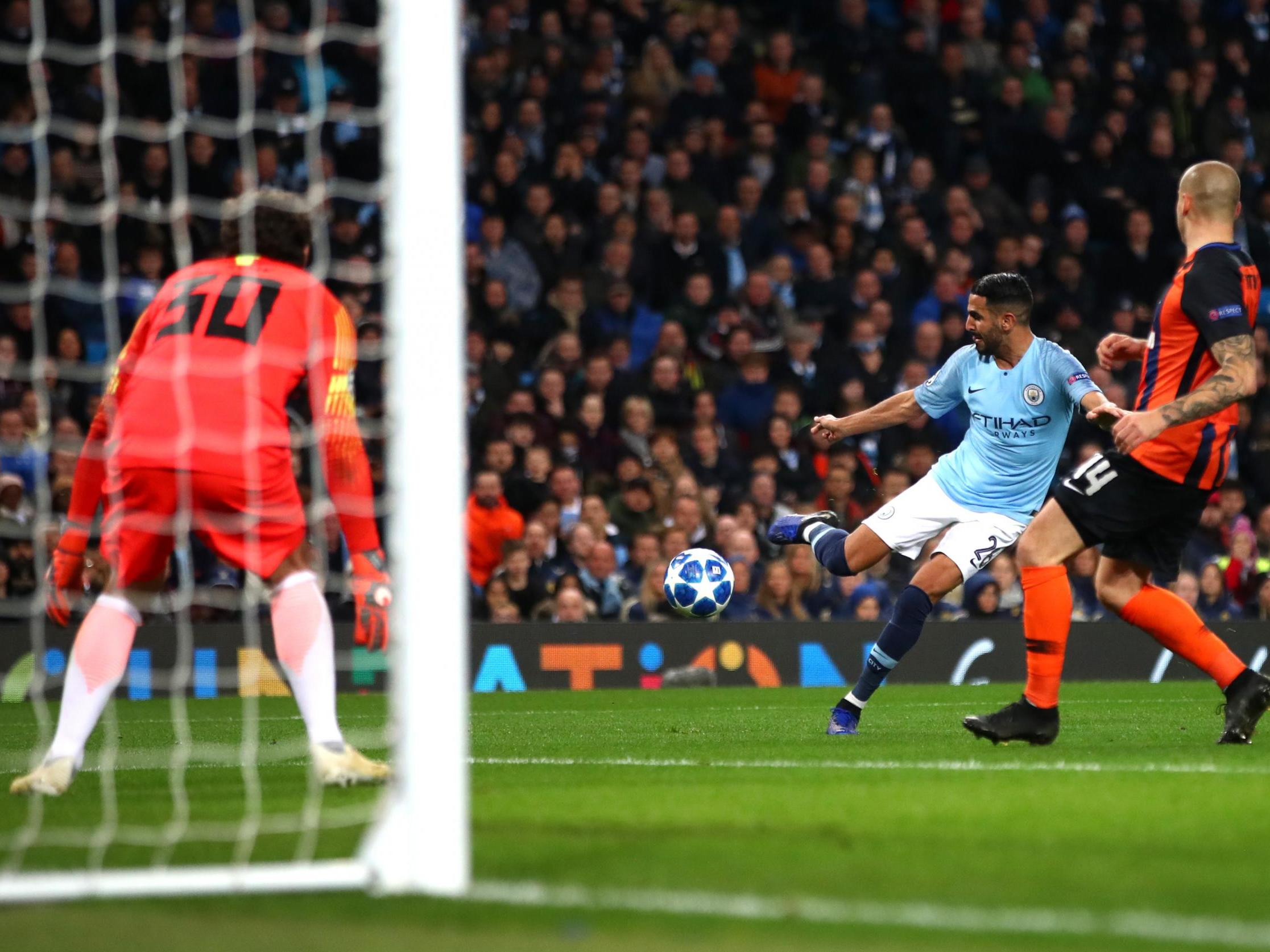 Just 14 minutes had gone when City raced into the lead, courtesy of a sublime piece of skill from Riyad Mahrez near the right-hand touchline.

He entered the area, defender Yaroslav Rakitskyy before him, twisting and turning the big defender repeatedly until the Shakhtar man appeared to give up his task, showing Mahrez the by-line from where he crossed into the area.

There was David Silva, unmarked and five yards out, who turned the ball into an empty net.

The penalty decision followed just nine minutes later and, with it, the game was as good as over.

More relevantly for Guardiola, with Lyon and Hoffenheim drawing 2-2, City were also as good as in the knock-out stages and all that remained was the issue of how many goals they would eventually amass. 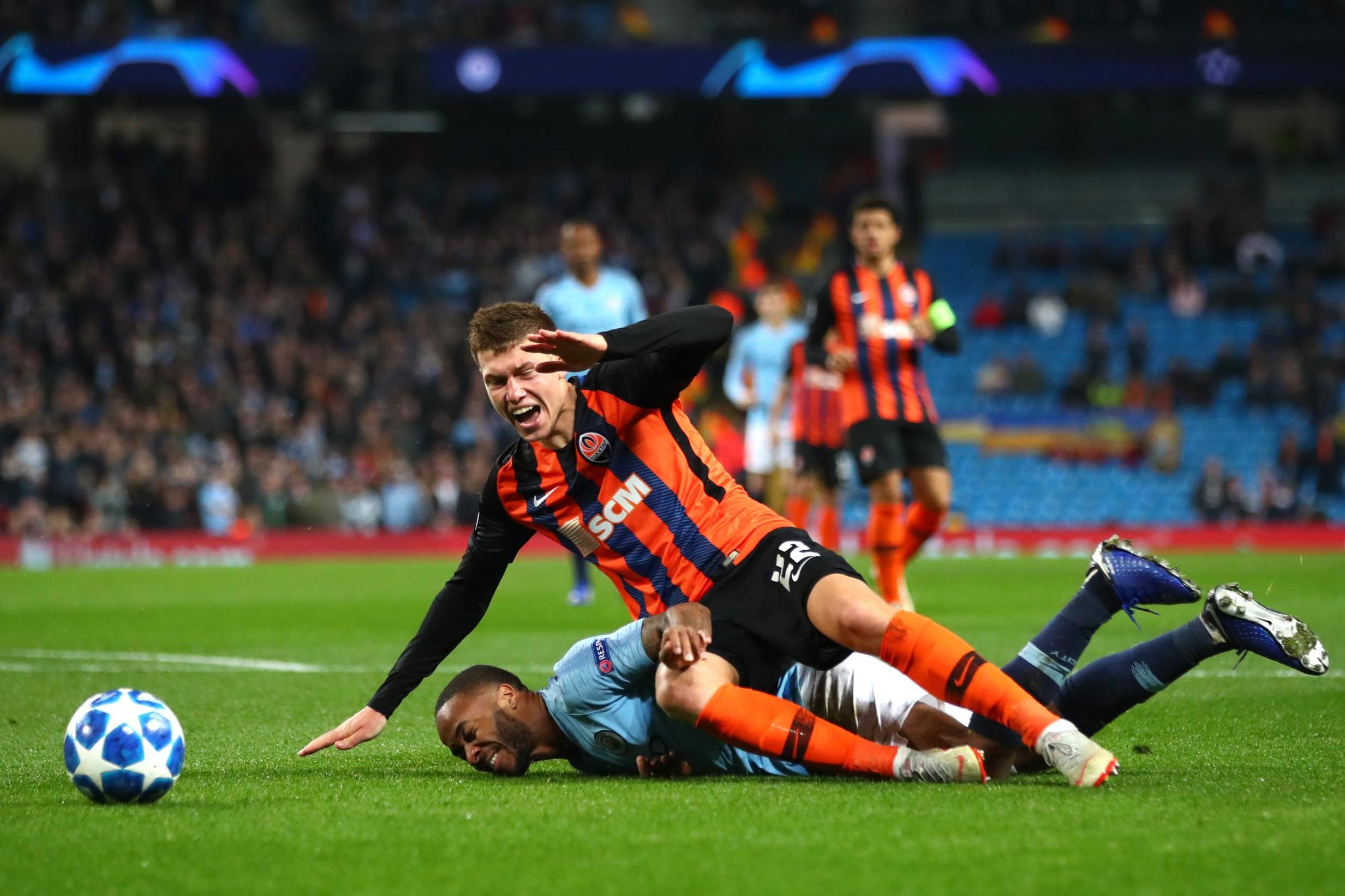 Before the goals, Jesus had missed with a weak header from Oleksandr Zinchenko’s cross against his countrymen and, between them, Bernardo had carved out an opening but struck the keeper from 25 yards.

Serhiy Bolbat briefly spied the City goal, clearing the bar from 15 yards, but the procession resumed as Jesus was denied only by Sergii Kryvtsov’s brilliant tackle, David Silva volleyed at the keeper at the far post and Jesus’s skilful lay-off was struck over by Bernardo.

If the Ukrainians entertained any thoughts of an unlikely comeback, they were emphatically removed just three minutes after the restart when Sterling extended the lead.

The in-form forward collected the ball just over the halfway line, surging between two challenges and staying on his feet impressively before continuing into the Shakhtar area and launching a 16-yard shot into the top corner.

Bernardo’s next enterprising run almost added to the goals, the Portuguese pushing a shot just wide of the far post, before Kassai awarded City a second penalty after 70 minutes, this one undisputed. 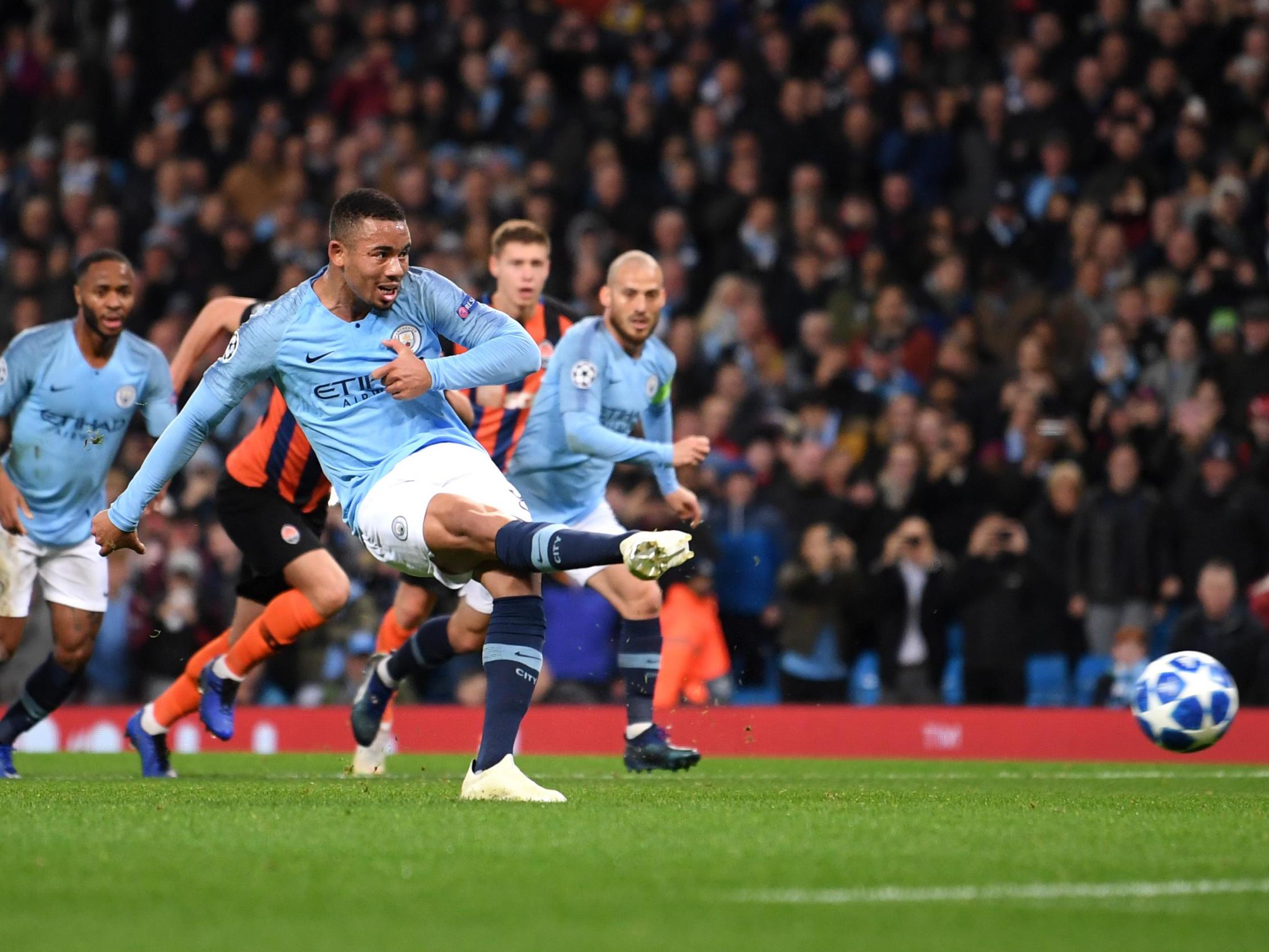 Not for the first time, David Silva was tormenting the Shakhtar defence with his close control when he was upended by Taras Stepanenko, presenting Jesus with the opportunity to step up and convert another nonchalant finish past Andriy Pyatov.

Still, the scoring was not over and, for the fifth time this season, City would break the five-goal barrier after 84 minutes through Mahrez, a goal that summed up the home side’s sheer domination.

Jesus broke through the middle, shovelled the ball wide to Ilkay Gundogan on the left and his lofted, cross-field pass was met by the Algerian who buried his shot past Pyatov at full pace.

A sixth, scored in injury-time, was set up by Mahrez’s selfless pass, allowing Jesus to complete his hat-trick with a delicate lob over the keeper from 20 yards.