‘It’s a massive piece of history in our country – something we have all wanted for such a long time’: Gareth Bale is relishing leading Wales out in Qatar – as captain hopes to inspire the next generation ahead of their first World Cup showing since 1958

It was an American reporter who put it to Gareth Bale on Sunday that he seemed to have a smile on his face when answering every question.

That certainly appeared to encapsulate how the first experience of a World Cup press conference was for the captain on whom so many Welsh hopes are riding.

Bale described how France 1998 was the first time he watched football’s greatest event — he, aged eight, had a pencil case with the tournament logo on it — but even then, his own nation’s absence had made a difference. 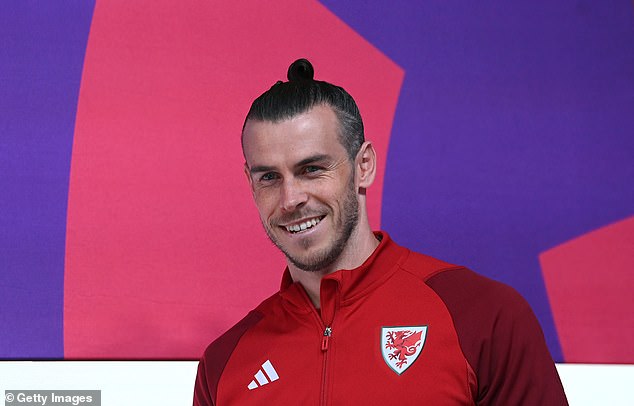 ‘As a kid, not having your country in the World Cup does take that little bit of specialness away,’ he reflected.

He said he had seen every Wales game since 2000 and that cannot have been easy.

From the first match he recalled watching — a 2-1 home defeat by Finland which was the national team’s first fixture at the Millennium Stadium — to the lowly finish in the 2014 World Cup qualifiers, when the Faroe Islands were seeded above his country, this global stage has seemed unattainable for so very long.

Bale has reached it in the twilight of his career and you sense he is savouring it all the more because of that.

So often across the past few years these media occasions have looked like drudgery to Bale, though before he got to his feet to leave on Sunday, he articulated what all of this means in words that were manna from heaven and promotional gold for the Welsh FA.

‘In every World Cup I’ve seen, there has never been a Wales flag, so it has been difficult to have a favourite team,’ the 33-year-old said. ‘For the youngsters growing up, to have Wales in the World Cup is an incredible experience to have. One I wished that I had. 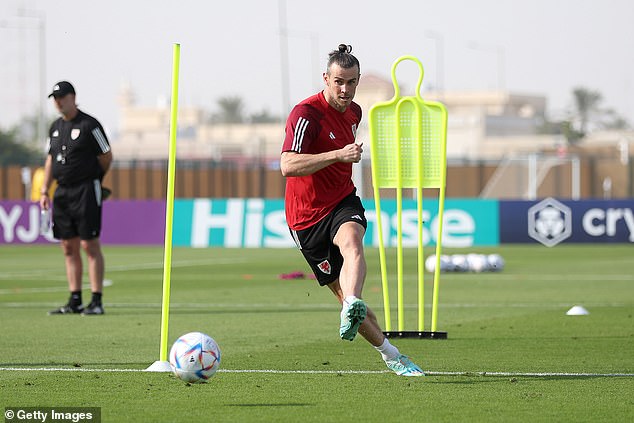 The ‘million dollar question’, as boss Rob Page has put it, is whether this individual, whose 30ft image is wrapped around a skyscraper here, will still have what it takes to deliver when competition begins tonight.

Wales’s game against the USA at the Ahmad Bin Ali Stadium is the first of three in nine days.

Bale certainly feels there is no problem with his minimal game time for Los Angeles FC in MLS, since June. ‘I’m right where I want to be before the first game,’ he said.

Other observers feel that his capacity to make a 90-minute contribution is irrelevant. ‘He only needs a couple of minutes in these group stage games to win them,’ Graeme Souness said at the weekend. Time will tell.

The player Wales arguably need just as much as Bale is Joe Allen, who — when fit — is the cognitive core of a midfield which is otherwise the weakest part of their team.

Page and Bale seemed to be engaging in mind games with the USA over the 32-year-old’s fitness. Page said that Allen, who has been out since September 17 with hamstring trouble, would not play.

Bale later suggested this was news to him — ‘He’s out, is he? OK’ — before proceeding to say: ‘I don’t think he’s been ruled out. Never say never.’

The notion of the so-called ‘Welsh Xavi’ playing does seem far-fetched, though Page has sprung surprises at moments like this before. He picked Kieffer Moore at the beginning of last summer’s European Championship, despite saying for weeks that Harry Wilson would be the striker.

Page did not seem hugely impressed to hear that USA manager Gregg Berhalter had described his side as very physical. ‘Very physical,’ he repeated, laughing.

Robust was another word Berhalter used, though it was the US midfielder Kellyn Acosta who had said coming into this game that the inexperienced USA — who have the second youngest squad after Ghana — will need to kick Bale around the pitch to subdue him.

‘I haven’t spoken to him here,’ Bale said, breezily, of his LA team-mate. ‘I tried to avoid him kicking me the last two weeks before we came here!

‘I’m used to getting kicked on the field. I’m sure it will be a fair but difficult game, played in a great spirit. Both teams will want to win.’

Wales gave as good as they got on the eve of this moment of history for the nation. First Minister Mark Drakeford, who is here to see the side play, delivered an impressive and classy response to FIFA president Gianni Infantino’s speech in which he said Western nations should examine themselves before questioning Qatar.

‘Wales is an outward-looking, inclusive nation where people’s rights really matter to us,’ Drakeford said. ‘But it wasn’t always like that. To take a moment to reflect on our own histories, it’s not a moment wasted.’

If there are concerns about Monday night’s referee being Qatari, then Page was not disclosing them. Nothing was going to get in the way of the rich historical significance of this moment.

Bale said: ‘When you are a kid, you dream of seeing Wales in the World Cup. To actually be in the team that achieved it is incredible.’