‘I want to die where I lived, on a football pitch’: Emotional Napoli boss Gennaro Gattuso opens up on his auto-immune disease that has left his eyelid drooping as he admits ‘only a crazy person would keep going’ in his job

Gennaro Gattuso has spoken out about his auto-immune disease that has left his eye-lid drooping but insists the issue is not a concern – saying he hopes to ‘die on the pitch where I lived’.

The Napoli boss revealed he has been living with Ocular Myasthenia – which weakens the eye muscles and eyelids – for the last ten years after his side’s 1-1 draw with Torino on Wednesday night.

He has been absent from the last handful of post-match interviews because of the problem and has been seen wearing an eye-patch, but the problem in his right eye-lid was visible during the Serie A clash and and said he wanted to ’embrace’ his issue. 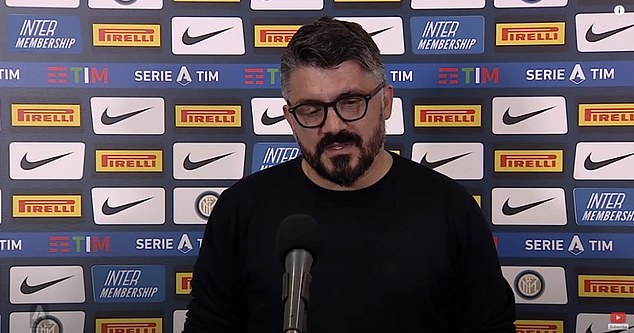 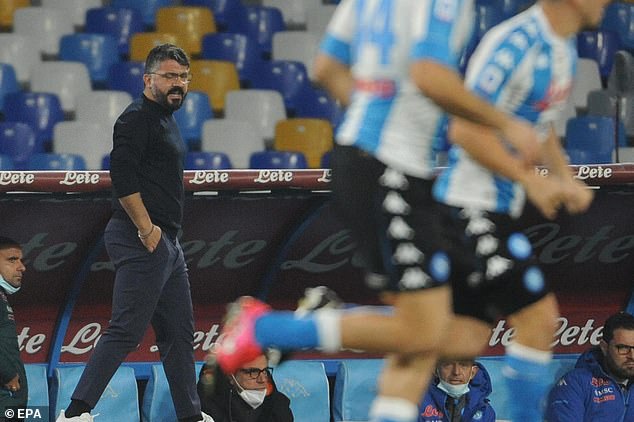 He has been seen with a drooping eyelid in recent games, caused by Ocular Myasthenia

‘We arrived really wiped out to this game, missing so many players, and even Chucky Lozano performed a miracle to play 30 minutes,’ he told Sky Sport Italia.

‘Therefore, we hang on to this point and consider it precious. I admit I’ve not been myself for the last 12 days either. I want to make an appeal to all those, especially kids, who look in the mirror and see something that looks odd or not quite right: life is beautiful. Embrace it all.

‘The lads suffered too seeing me like this, I know that, but I’m alive. I’ve had myasthenia for 10 years, this is the third time it has flared up this badly, but it’ll pass and my eye will return to normal.’ 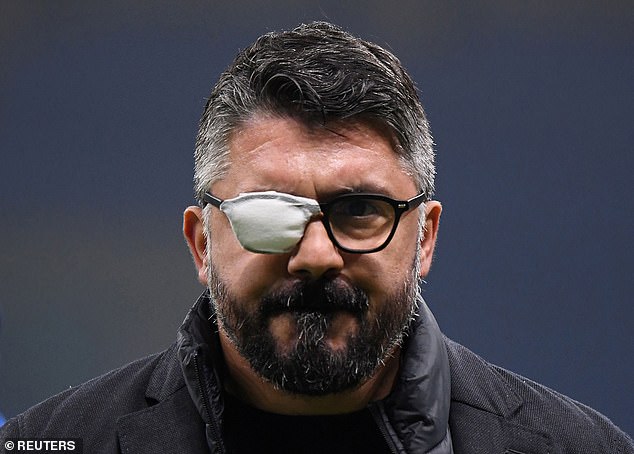 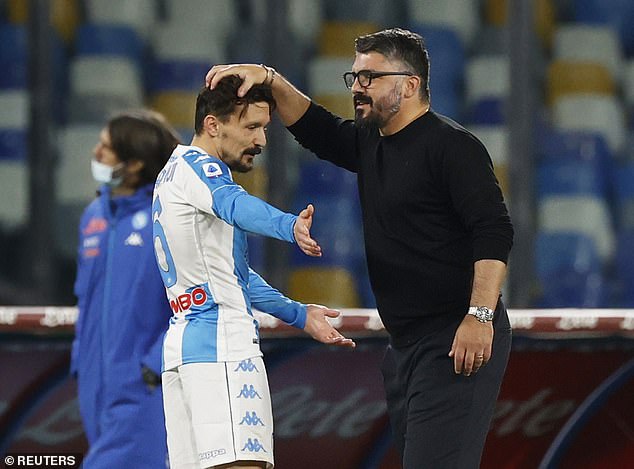 The condition is an auto-immune disorder which causes weakness and fatigue of one or both eyes or in the eyelids.

It can cause drooping of the eyelids, known as ptosis, with double vision a common symptom.

The ocular onset can progress to other muscle groups within the first two years, but if it is confined to the ocular muscles for three or more years it is unlikely to cause the generalised disease.

A medication called pyridostigmine – which temporarily improves nerve-muscle transmission – can be used to treat Myasthenia alone.

Ocular Myasthenia makes the eyes fatigued and can cause double vision and drooping eyelids. Problems usually arise at the end of the day or after the eyes have been used frequently.

But Gattuso – who played 468 times for Milan and won 73 caps for Italy – said he had no plans to quit football because of the condition.

He stressed there were ‘worse things’ to worry about despite concerns for his health after seeing his eye. He said when he dies he wants it to be ‘on the football pitch where I lived’.

‘It’s not just that it looks bad, this condition makes you feel really exhausted, plus seeing double 24 hours a day really takes it out of you,’ he added. ‘Only a crazy person like me would keep going.

‘However, this is my life and there are worse things. I know some out there already assume I’ve got a month left to live, but I can assure you, it’s fine. When I eventually die, I want to go where I lived, on a football pitch.’

Torino had taken the lead against his side in the second half through Armando Izzo, and it required a late stoppage time equaliser from Lorenzo Insigne to ensure the Naples outfit left with a point.

The 42-year-old, always a fiery and controversial figure throughout his career, joined Napoli as coach in 2019 and has them challenging for a place in the top four this season. They sit fifth with 25 points from 13 games.

In his first season in charge he led the club to a 7th placed finish following a bad start to the campaign under Carlo Ancelotti. He previously had one year managing his former side Milan, but left on May 2019 after missing out on the Champions League places.

His managerial career got off to a rocky start – lasting just three months at FC Sion and four months at Palermo.