Footage has emerged of German fans storming the Green Man pub near Wembley Stadium ahead of the two sides’ Nations League clash on Monday. German supporters were seen wearing balaclavas and descending onto the pub and attacking fans before kick-off in London.

A group of over 50 German fans took to the popular Wembley pub, causing chaos in the hour before a ball was kicked at the stadium. Fans alleged that German supporters arrived at the pub armed before a mass brawl broke out.

Eyewitness Luke Robinson told the i that the Germans were hitting “anyone and everyone” for almost five minutes before the fight was broken up by police. “There’s an entrance at the back of the Green Man and about 50 of them turned up wearing masks and England scarves,” Robinson said.

“They stormed in, were hitting anyone and everyone. It was going on for a good five minutes before the police arrived. A lot of people were in a bad way. People were on the floor, unconscious, covered in blood. Even kids — one lad no older than 13 had a bleeding nose.” 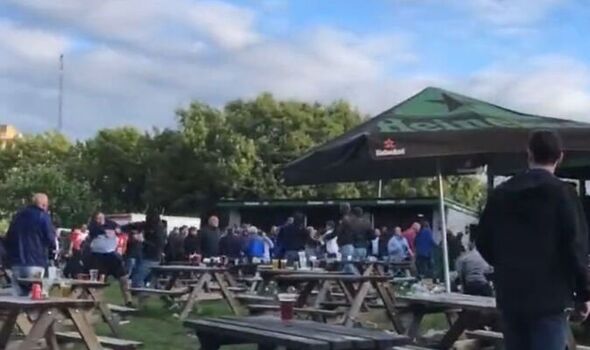