Matildas coach Tony Gustavsson has coaxed a 36-year-old out of retirement for the 2022 Asian Cup, selecting veteran Aivi Luik who had called time her international career six months ago.

The extent of Australia’s lack of depth in defence and defensive midfield has been laid bare by the selection of the versatile veteran who was talked back into the national team by Gustavsson two weeks ago, having not seen enough from the youngsters he trialled in recent months. 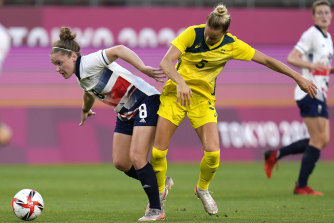 Recalled: Aivi Luik was coaxed out of retirement for the Asian CupCredit:AP

Adept at either central defence or as a holding midfielder, Luik has been in impressive form for Pomigliano in Italy’s Serie A and answered an SOS call from Gustavsson over the Christmas break.

“The one stand out and surprise for a lot of you is that Aivi Luik is coming back from retirement,” Gustavsson said. “We need a back-up solution both in holding midfield and at centre-back … she didn’t retire from football, she retired from the national team.”

Despite spruiking the need to develop players who will be at their peak by the 2023 Women’s World Cup, Gustavsson has opted for more of a stop-gap solution to Australia’s defence at this month’s Asian Cup by recalling Luik.

“We will always have a little bit of an eye on the World Cup cycle as well, as you can see that there’s some young exciting players here as well,” Gustavsson said. “But at this point right now, specifically about Aivi, it’s just this tournament, nothing else.”

Gustavsson cited a lack of experience in defence as one of the main reasons for recalling Luik, having trialled a number of teenagers in the backline in recent friendlies. Nineteen-year-old Jessika Nash started against USA in November but did not make the 25-player squad for the Asian Cup while Angela Beard, Emma Checker and Jenna McCormick were the other defensive options left out of the squad.

Winonah Hartley, Holly McNamara and Cortnee Vine are the other surprise inclusions, working their way into the squad for the upcoming tournament despite having previously never represented the Matildas. Just a month ago, Sydney FC winger Vine was critical of the national team’s selection, suggesting Gustavsson was “missing a bit of a key generation” by not picking a number of players in their early to mid 20s. She now finds herself on the cusp of playing for Australia at the Asian Cup with Gustavsson revealing had it not been for injuries, Vine would have likely been selected earlier.