Harry Maguire insisted England must not allow their Euro 2020 quarter-final win over Ukraine to go to their heads – because there’s still another two games to go for glory. England are looking to win a major tournament for just the second time in the nation’s history and for the first time since the World Cup in 1966.

Gareth Southgate’s side have now made back-to-back semi-finals of tournaments after the 2018 World Cup and put Ukraine to the sword in brutal fashion on Saturday night.

The Manchester United captain helped the Three Lions into the final four with a thumping header from a Luke Shaw free-kick to make it 2-0 in Rome.

That goal came either side of Harry Kane’s two strikes before Jordan Henderson headed in from a corner to kill off the Ukrainians’ chances of making the semis.

And Maguire told the BBC post-match: “It’s a great feeling, back-to-back semi-finals at a major tournament is a great achievement.

“I don’t want to be a party pooper but we don’t stop here. We’ve got another big game coming up and we want to go further this time than we did at the World Cup.” 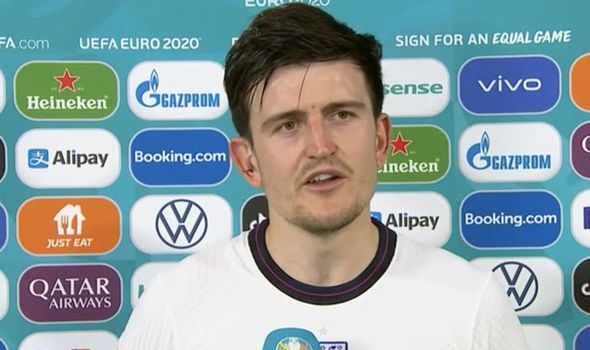 England take on Denmark in the semis next week with Italy facing Spain in the other final-four clash.

It will be their first semi-final at a European Championship since 1996 after what was their biggest ever win in the competition.

The 4-0 thrashing of Ukraine was also their biggest ever win in the knockout stages of any major tournament.

Maguire continued: “We have great belief in the dressing room. The first half was tough.

“I think the second goal settled us down a lot and from then on we controlled the game really well. We got the third and fourth which I think we deserved on the night.

“It was an impressive performance in the end. We’ve got to now rest and recover and we’ve got another big one coming up.

“In an England shirt he looks like a man mountain to me. He comes out with the ball and picks the right passes.

“I am even more confident now. Biggest compliment I can give this side is I have never ever seen a side so composed.

“All the players coming on are impacting the game in a positive way, the manager is utilising the squad. Everyone is justifying their selection. They are hard to play against.”

For the latest news and breaking news visit: /sport/football