There has been a feel-good factor about England over the past few days since they earned some measure of revenge over Croatia by beating their 2018 World Cup semi-final conquerors in the sunshine on Sunday.

But the rain falling hard on Wembley five days later summed up the mood for the hosts at full-time in their second group game. England had been battered back – although not quite beaten – by a determined Scotland side. John Stones hit a post but the best chances belonged to the visitors.

The goalless draw is far from a disaster and there is still quality in this England team to be excited about. There’s also good reason to believe they will get back on track against a Czech Republic team they beat 5-0 at this venue during qualifying. But confidence has taken a knock.

The result has also raised tricky questions, from how England can get Harry Kane firing again to whether the celebrated youth of the team could actually do with some more experience to manage intense tests, such as the one presented to them by Scotland.

Jack Grealish’s name was chanted by England’s supporters before he was substituted on. Does Gareth Southgate bow to that pressure and add the Aston Villa ace’s creativity to the front line in a bid to get Kane up and running? Is the final group game an opportunity to introduce the experienced heads – but game-short bodies – of Harry Maguire and Jordan Henderson?

Is there even grounds for a formation switch to find a formula which would serve this England side better in the knockouts? If Scotland were able to find joy down the flanks and central midfield, what would France, Germany, or Portugal be able to achieve in those areas?

They are dilemmas that seemed less important on Sunday – but suddenly they will be raised in the wake of a sluggish display against the Scots.

England looked a long way off the level required to match up to their pre-tournament billing as joint-favourites on Friday. And while the challenge of Scotland is a unique one, Southgate has work to do over the coming days to restore belief.
Peter Smith 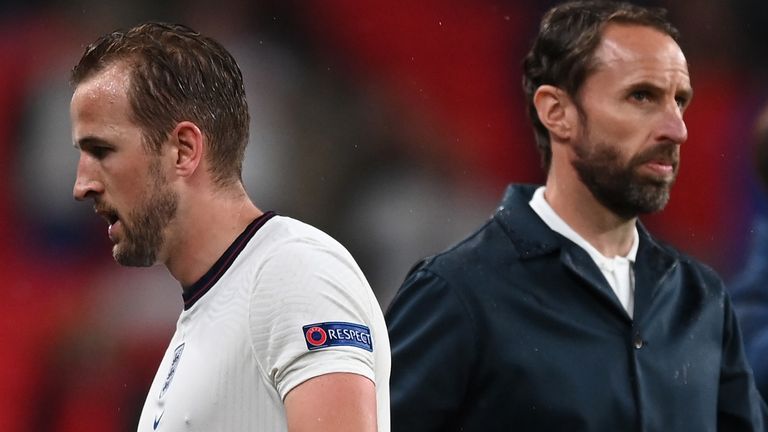 There was a suggestion or two prior to Euro 2020 that Harry Maguire rather than Harry Kane was England’s most important player because the Manchester United captain was the one performer they couldn’t do without this summer.

Two matches in and Maguire’s absence in the event of successive clean sheets is beginning to pale in potential consequence compared to England’s worrying Harry Kane problem.

Even the shocking stats of Kane’s contribution, or lack of, against Scotland only tells half the tale. Yes, there were only 19 shots. No, there really wasn’t a shot on target all night prior to his substitution. But what was even more alarming was the pedestrian and ponderous style of his display. ‘Leggy’ is the standard football vernacular. ‘Slow’ is the word in everyday-speak. In an England display that lacked intensity and zip, Kane was the embodiment.

There was a particularly concerning moment early in the second half when Luke Shaw broke into the box. The England left-back only had a brief moment to look and assess the situation and look for support. What he would have seen was a wall of blue in front of him. Where was Kane? On his heels, statuesque, unreachable at the back post behind two Scotland defenders. Understandably, Shaw went for the shot, and he could hardly be faulted for it when the ball sailed harmlessly wide. As for Kane, the lack of movement and the lack of threat was most definitely un-Kane-like.

Is he carrying an injury? Or has he simply been weighed down by expectation?

The other question to be asked, inevitably, is whether Gareth Southgate would dare omit Kane from the starting line-up against the Czech Republic on Tuesday. Surely not. Southgate, after all, is instinctively loyal to his players – an outlook which was amply rewarded just a week ago when Raheem Sterling scored the only goal against Croatia. But any question about Kane’s position in the England team misses the point, or at least the point of the problem. Because England’s problem isn’t merely or simply that they have a player out of form. The far bigger problem is that without an in-form Kane, it’s very difficult to see how England go much further. What we saw on Friday night was England without Kane, and it wasn’t pretty.

They can’t do without him.
Pete Gill

Scotland show what they’re capable of

It’s not disrespectful to say Scotland are not the most technically gifted side at Euro 2020 – and they showed just how little that matters against England on Friday night.

Any good team, even with the best footballing wizards on the planet, will struggle when they do not play as a unit. Scotland did to a point against the Czech Republic, let down by poor finishing and defensive lapses, but their intensity and desire against England more than filled in the gaps required to match one of the tournament favourites.

While their hosts crumbled under the weight of expectation in front of a home crowd at Wembley, Scotland put their own concerns about progressing beyond the group stages to one side to play with freedom and without fear. Perhaps that, more than anything, had stifled them when in front of an expectant home crowd at Hampden on Monday.

Whatever the reason, Scotland showed Clarke, and the country, what they can do when they are at full throttle. Andy Robertson said “we deserved more”. He’s a man who bleeds tartan but he was objectively right.

It cannot be overlooked that Scotland have still not scored after two games and a third blank against Croatia on Tuesday will see them out of the tournament, but they are doing the hard bit, creating chances, and we have seen what they are truly capable of now.

England and Scotland’s attentions now turn to Tuesday, where their final group games will ultimately decide their fate in Group D.

For England, it is the Czech Republic. A team they thrashed at Wembley in qualifying… and then lost to away from home. A Czech team who have surprised some with their quality at this tournament, buoyant from the goals of Patrik Schick, an early front-runner in the Golden Boot race, after adding a penalty to his impressive two goals against Scotland.

He will certainly be one to watch but so will two familiar faces: Tomas Soucek and Vladimir Coufal. The West Ham pair are key players for this side and, while Soucek will cause problems in England’s box from set-pieces, right-back Coufal has the quality to shut down England’s left side, where they have had much of their attacking joy so far at the Euros.

In Scotland’s case, they will be full of belief once more when they kick off at Hampden. While Croatia were a daunting final game opponent pre-tournament, their mystique had been dimmed by their performances against England and Czech Republic.

Luka Modric still sparkles and, with his fine goal on Friday, Ivan Perisic reminded everyone Croatia have individual quality to call upon. But Steve Clarke will be hopeful that if Scotland can take the intensity, unity, and quality levels they showed against England into that showdown in Glasgow, they have the capacity to clinch a qualifying spot.
Pete Smith

The state of play in Group D: What England and Scotland need to progress

While England‘s current haul of four points should see them progress as one of the four best-placed third-placed teams even if they lose to the Czech Republic on Tuesday, they need at least a draw to be absolutely sure of progressing and only a victory will be enough for them to go through as group winners.

A draw for the Czech Republic would, meanwhile, ensure they progress as group winners and face a potential meeting with one of Portugal, Germany, France or Hungary.

Were England to go through as runners-up, they would face the runners-up from Group E – Spain, Sweden, Poland or Slovakia.

As for Scotland, nothing less than a victory over Croatia will be sufficient for them to have any hope of making it through to the last 16.

If Scotland win and England and the Czechs draw, Scotland should go through as one of the four third-placed teams.