Brentford missed the chance to cut the gap to second-placed Watford to seven points as they were forced to settle for a point after a 1-1 draw with Huddersfield.

The hosts were gifted the lead early on, when a mix-up in the Bees’ defence allowed Lewis O’Brien to roll in the opener (7), but Thomas Frank’s men levelled shortly after the restart through Mads Bech Sorensen (50).

Leading Championship scorer Ivan Toney then hit the post and while the game ended in a frantic manner, neither team was able to force a winner. 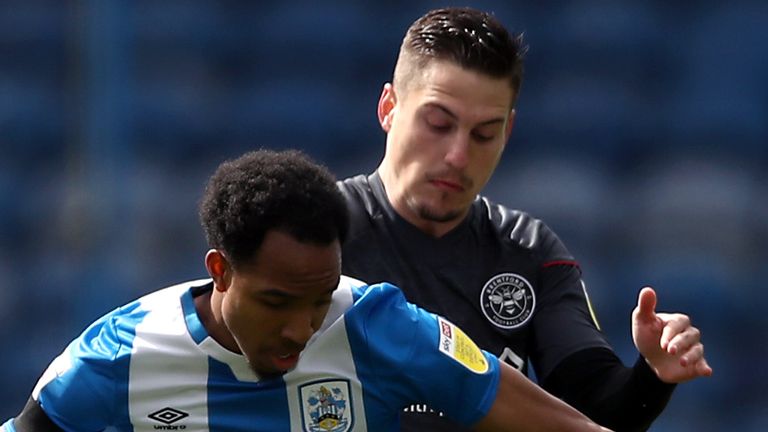 A point lifts Brentford above Swansea into third on goal difference, nine points outside the top two with eight games to play, while Huddersfield add another point to their survival bid and now sit 18th, eight points off the relegation zone.

How Brentford drew a third game in succession

Swansea’s last-gasp defeat to Birmingham on Good Friday teed Brentford up to leap into third and, potentially, get their automatic promotion charge back on track in the wake of two disappointing draws prior to the international break.

They gifted the lead to Huddersfield after seven minutes, however, when Christian Norgaard was caught in possession after a weak pass from Mads Roerslev, presenting O’Brien with the simple task of rolling the ball past poorly-placed goalkeeper David Raya and over the line.

Though the hosts were well-organised, it was one-way traffic in the immediate aftermath of the goal and shortly after Vitaly Janelt forced a good save from Ryan Schofield from an angle, Brentford should have been awarded a penalty when Naby Sarr handled the ball as he brought a long ball under control in the box.

In first-half stoppage time, the Bees had further chances to restore parity through Bryan Mbeumo, who first struggled to connect with a deft flick from Toney at the far post and then passed up the chance to volley at goal after being located by Norgaard.

Brentford stepped it up a notch straight after the break and drew level courtesy of Sorensen, who tucked away Janelt’s square ball moments after skipper Pontus Jansson’s header had been blocked by Sarr on the line.

Within seconds they almost had a second, but Toney, who was left frustrated all afternoon, could only find the base of the post after cutting in off the right.

Town settled again after the equaliser and had a penalty shout of their own turned down when O’Brien went down under pressure from Saman Ghoddos inside the area and despite a frantic finish to proceedings, it ended all square.

Man of the match – Lewis O’Brien

“He has been tireless and relentless today. He has been all over the pitch in different positions, chasing things down, getting on the scoresheet and is a key player in this Huddersfield side.”

Huddersfield’s Carlos Corberan: “I think, at the end, we can say that a draw was maybe a fair result today. “At the same time, we were always in the game trying to get the three points. Demeaco Duhaney had a good chance, we could have had a penalty too.

Both teams went for the win and tried to press. After we had to change
Alex Vallejo through injury, we didn’t keep the ball as well. We had more counter-attacks in the second half. The way we conceded the goal, and the counters we had in the second half, means we cannot celebrate the result. However, I really appreciate the effort the players put into this game.”

Brentford’s Thomas Frank: “I think we played to get more out of the game. It was not a top performance but it was one of those performances you see a lot of times during a season where you perform a bit better than average, I would say. If you look at the chances, the opportunities, the crosses, the good situations in the final third, I think we did more than enough to score two goals.

“I think we have conceded too many odd goals, if that makes sense. Compared to last season, I would say we concede too many goals but if you look at the stats, the situation, expected goals against us are lower this year, touches in our box are lower this year. We are performing in everything else and sometimes those margins don’t drop your way. For me, cool head, keep going, keep believing because there’s everything to play for.”

Both sides are back in action on Tuesday, April 6. Brentford host Birmingham at the Brentford Community Stadium at 7pm, while Huddersfield travel to Carrow Road to face Norwich at 7.45pm, live on Sky Sports Football.