Jose Mourinho has suggested Tottenham are not looking to make changes in goal this summer despite Hugo Lloris coming into the final year of his contract.

The France number one has been linked with a move to Paris Saint-Germain this summer but Mourinho insists the 34-year-old remains the best goalkeeper in England, and he is also happy with Joe Hart as his deputy.

Spurs have been scouting other ‘keepers ready for Lloris’s eventual departure – including Nick Pope, Dean Henderson and Sam Johnstone – but Mourinho reminded that both his ‘keepers remain under contract until 2022.

He said: “I don’t want to offend anyone, and I hope that people just accept my opinion; we have the best goalkeeper in England and the best English goalkeeper. 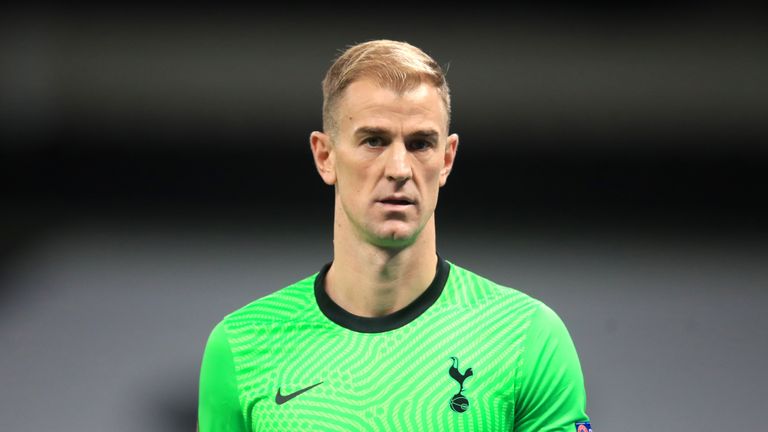 “Hugo is Hugo. He is a very good goalkeeper. He is our number one. It is hard for me to say that because Joe works so hard and deserves more than not playing one single minute in the Premier League until now. But it’s the reality of things.”

Mourinho’s own future as manager has been speculated on this season but Sky Sports News reported last week Spurs are planning for the summer transfer market with Mourinho fully involved, and they have been tracking players like Stuttgart’s Nicolas Gonzalez, Lille’s Jonathan Bamba and Palmeiras midfielder Gabriel Menino.

Like most clubs, however, Spurs need to sell to accrue funds to spend on new talent, and Mourinho admits he already has an idea of who he wants to stay and who can go, even with their top-four fate far from decided.

“We are much more focused on the now, than what is next,” he said. “Of course I have an idea. Of course we share our ideas; when I say we I mean myself and the structure, including the boss. So we know what we want, but at the same time we can expect a strange summer.

“I believe it is going to be strange in the sense of a different window than in previous seasons. In this moment I don’t think it’s about anyone fighting for their future, but everyone fighting for the points we need to finish the season the best we can.”

Harry Kane’s future has also been under a cloud in recent weeks with the striker refusing to rule out whether he will consider his future in the summer, especially if Tottenham miss out on the Champions League again next season.

But Mourinho insists he has seen no change in Kane’s application and therefore has no need to question himself on his intentions after England’s Euro 2020 campaign.

“He works so well every day. He is such a professional; committed with the team, performing well. [So] there is nothing to speak with him [about],” Mourinho said. “[There are] three years of his contract [left]. I have nothing to speak to him about unless he wants to speak to me, but until now he never approached me in relation to anything.”