Home » Soccer » ‘I don’t care what people think of me,’ says Mesut Ozil

‘I don’t care what people think of me,’ says Mesut Ozil as Arsenal playmaker hits back at his critics

Opinions and Mesut Ozil go hand-in-hand. You’ll have reached your own conclusions about the enigmatic German.

Genius, lazy, luxury player, disinterested, unpatriotic or under-appreciated; whatever the stigma, Ozil’s probably been called it.

Of course, those opinions are wholly entitled — Ozil admits as much as he sits down with Sportsmail for a rare newspaper interview. 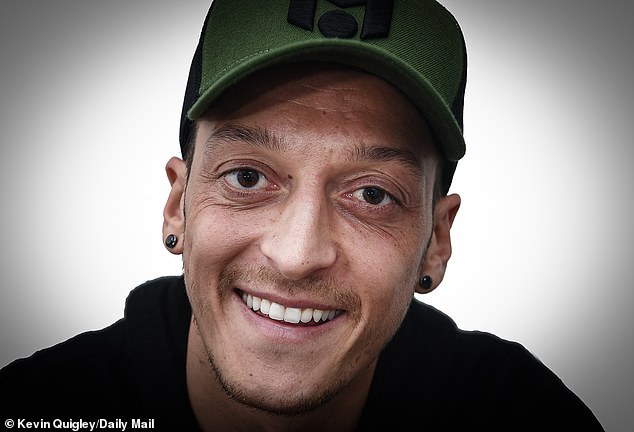 ‘Look, I know there’s people out there that like me, there are also people who don’t like me,’ Ozil says.

‘This is a fact of life. But, for me, what is important is what the people in my inner circle tell me.

‘I don’t care what people say outside of that. It doesn’t affect me.

‘If the coach, or people in my circle, tell me: “Mesut you have to do this, or have to do that” then I listen. I’ll take that and work on it.

‘But I don’t look at what someone else is saying. It really doesn’t affect me.’ 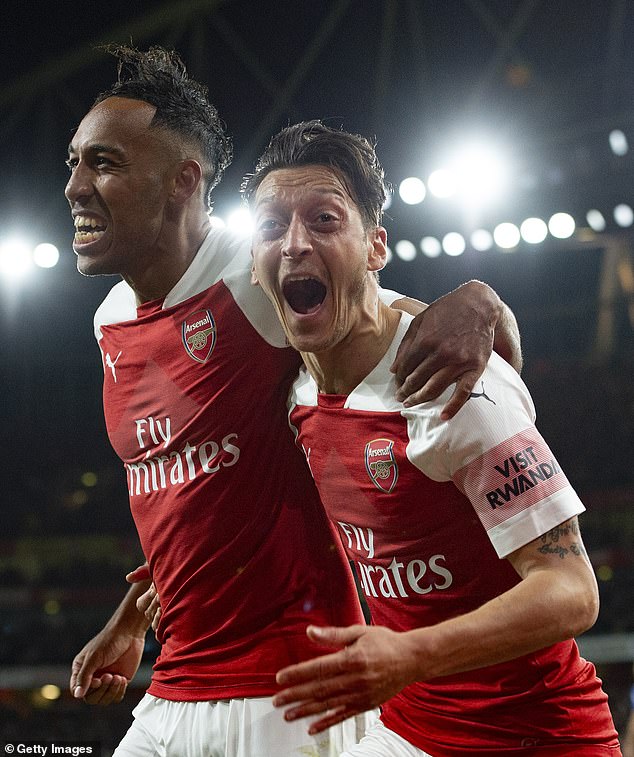 You can make your own mind up about who Ozil’s remarks are aimed at. Pundits? Maybe.

It was less than a fortnight ago he was described as ‘petulant’ by Graeme Souness. Ozil will argue he’s been called far worse.

Or maybe it’s those who criticised him for the reasoning behind his international retirement after Germany’s disastrous World Cup campaign.

The midfielder, born to Turkish parents, cited ‘discrimination’ as his reason behind walking away from international football.

‘I am German when we win, an immigrant when we lose,’ said Ozil — a devout Muslim — in July when announcing his international retirement. Yet there’s no anger or resentment in Ozil’s tone when discussing criticism. 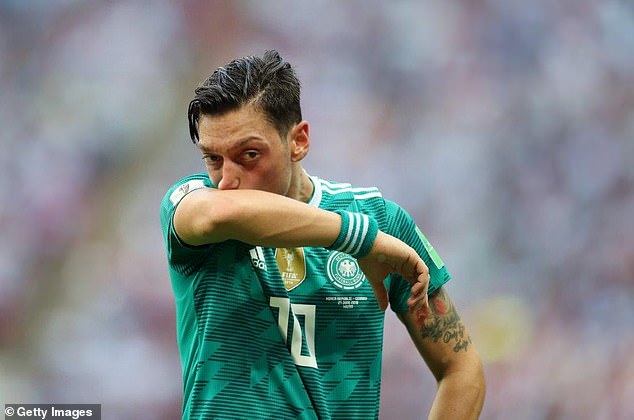 Instead, his response is cool and calculated, with the same precision as his outrageous outside of the boot pass to set-up Pierre-Emerick Aubameyang in last month’s win over Leicester.

Inevitably, that game against the Foxes comes up in conversation. How could it not? Ozil was breathtaking that night — a goal followed by his sublime assist.

All that on an evening when he was captaining Arsenal for the very first time. Unarguably, one of — if not his best — performance in an Arsenal shirt.

Indeed, Unai Emery’s revolution is quickly taking shape — and Ozil is a central figure in the Gunners resurgence since Arsene Wenger’s departure.

On Thursday night, Arsenal can extend their unbeaten run to 15 games, a sequence they haven’t achieved since the 2007-08 season, when they face Sporting Lisbon in the Europa League.

But just as Ozil refuses to get carried away with the criticism, he declines the opportunity to gush over his sizzling display against Leicester and Arsenal’s excellent start to life under Emery’s tutelage. 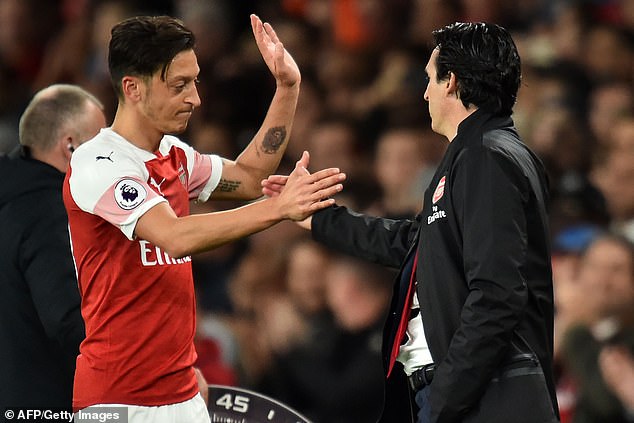 Instead, he has called on his team to ensure their blistering beginning to the campaign does not fade into the background — to ensure this is simply the start of bigger and better things for a football club that has been entrenched in malaise for so long.

‘Personally, things are going well but that doesn’t mean I stop working,’ was Ozil’s level-headed response when asked about his mesmerising display against Leicester.

‘But the most important thing is that the team is going well at the moment. But it’s a process — every coach has a different strategy or philosophy and we can feel it.

‘It’s a tactical thing with the new coach. We are learning from him, we are trying to give our best on the pitch every day and every hour.

‘But we have to keep being hungry, and keep progressing. It’s not like we are done now (because we have gone 14 games unbeaten). It’s like we are just starting.

‘We are doing well for now, but that doesn’t mean we stop.’

Reminders of what await Arsenal should they continue their brilliant form surround Ozil as we meet in London’s Covent Garden at the launch of his new wellbeing brand UNITY, co-founded with former Gunners team-mate Matthieu Flamini. 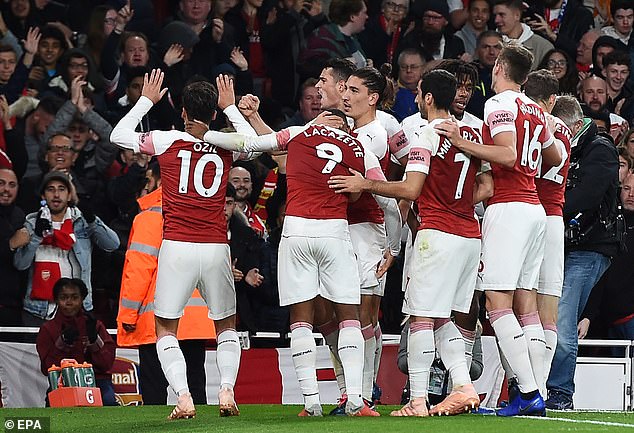 Hundreds of PSV Eindhoven fans have descended on Covent Garden on Tuesday night ahead of making their way to Wembley for the Champions League group clash against Tottenham.

Come this time next year, Ozil is hoping he’ll be busy on Tuesday and Wednesday nights.

But if Arsenal fail in their efforts to break back into European football’s elite, you get the impression he’ll handle the disappointment.

Over time, Ozil’s developed thicker skin than most. He’s had to to survive.

A tough upbringing, his formative years were beset with difficulties. It’s credit to Ozil that he is confident enough to discuss it.

Growing up in the run-down district of Bismarck, in Gelsenkirchen, Ozil lived in a small apartment with his parents and three siblings – brother Mutlu and sister Nese and Duygu.

He had to grow up quickly, particularly in the caged concrete football pitches he used to hone his talent. 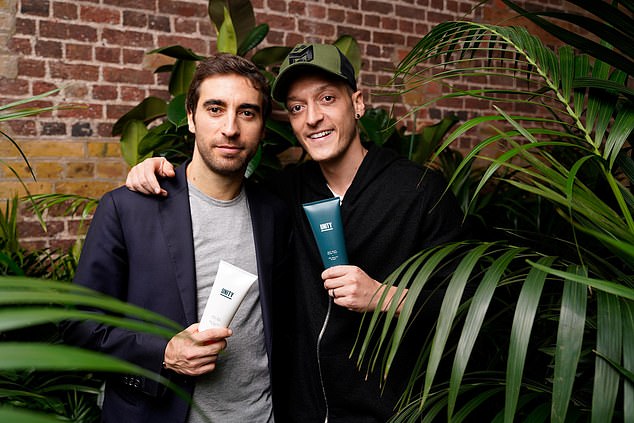 One of those pitches is now known as the ‘Mesut cage’ by locals in homage to the World Cup winner.

Football was a release for Ozil back then, an opportunity to escape from poverty.

Ozil was often teased by his peers for things as material as not having the latest football boots.

In a previous interview, he once confessed to binding a pair of shoes together with tape so he could play. On other occasions he had to miss matches because the family didn’t own a car.

‘I had a very difficult childhood, I grew up in a very rough area,’ explained Ozil.

‘I know what it means not to have anything – so I always said to myself when I have something I want to give back. That was always one of the mottos of my life.’

Ozil’s stayed true to his word. After playing a lead role in Germany’s World Cup triumph in 2014, Ozil famously spent his bonus on paying for surgery for 23 Brazilian children. 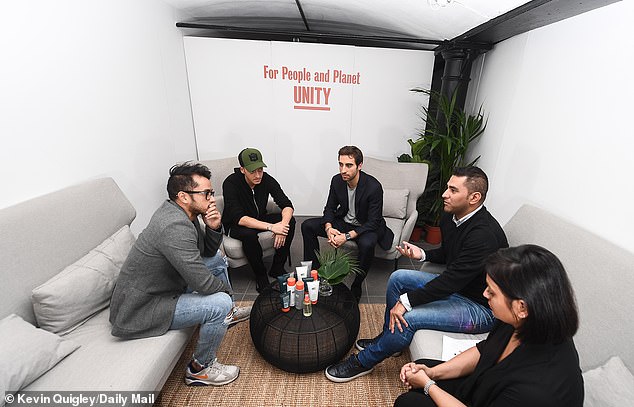 Two years later, he visited a refugee camp in Zaatari, Jordan, in his role working with the Asian Football Development Project.

‘I went to the refugee camp in Zatari (Jordan) to see the kids to see if I can give them a great moment, that was one of the biggest experiences that touched me, it changed me,’ he explained.

‘I love football, football is my passion — that’s why I’m playing. My hobby became my profession and I love being out on the pitch.

‘But I know there’s a life outside the pitch. When I go home, or after a game then I’m in a normal life, if I can give something back then I will do.’