Home » Soccer » ‘I’m in awe every day’: Why just being in Qatar is a win for the ‘Grey Wiggle’

Doha: Fame doesn’t sit particularly well with Andrew Redmayne. Little known outside the bubble that Australian soccer operates within – well, except for once every four years – the man otherwise known as the ‘Grey Wiggle’ became an instant national sporting icon with his heroics that got the Socceroos to this World Cup.

But a quick stroll through one of Doha’s many opulent shopping malls – and by opulent, we mean theme parks, ice skating rinks, and indoor canals, replete with Venetian-style gondolas – and the Sydney FC goalkeeper was taken right back to his happy place.

“I think we’d be one of the few nations that could actually walk through a shopping centre on the eve of a World Cup,” Redmayne said. “We kind of just slipped into the background, more or less.”

Cristiano Ronaldo wouldn’t be able to walk outside his hotel without needing half the city’s police force to escort him. Lionel Messi can’t even front a press conference at the tournament’s main media centre without his sheer presence reducing the world’s journalists to clamouring teenage fanatics.

That’s their problem. Redmayne might be one of the most recognisable faces in an otherwise low-profile Australian squad, having probably rocketed into the top three with his dancing antics in Doha in that qualifying play-off, but in global terms, he’s still a nobody. And that’s fine by him. 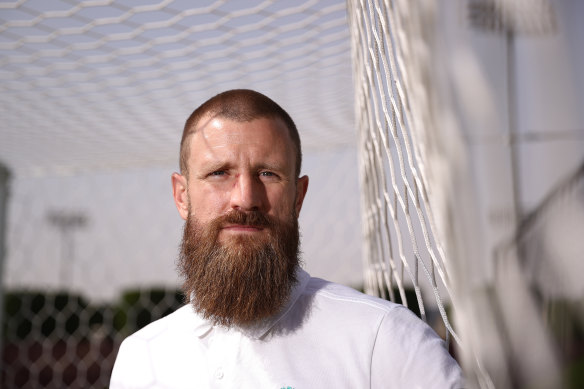 Andrew Redmayne is slinking into the background at the Qatar World Cup – just the way he likes it. Credit:Getty

In truth, he’s happy to be here. It’s been a long and winding road to Qatar for the 33-year-old who had his dream of signing for Arsenal shattered as a teenager, and has been thrown on the A-League scrapheap on more than one occasion, but has been rewarded handsomely for his persistence at his craft with this World Cup berth.

“It’s surreal. I’m in awe every day. Broke down in tears a few times,” Redmayne said.

“It was a nice little touch – they [the Socceroos’ staff] put photos above every players’ bed of family and key moments in your career, so that was a nice touch. I’m really looking forward to seeing my family over here and share that experience with them.

“But having said that, we’ve got to shelve that. There’s a job to do on the pitch. I want to fulfil that role as best as I can.” 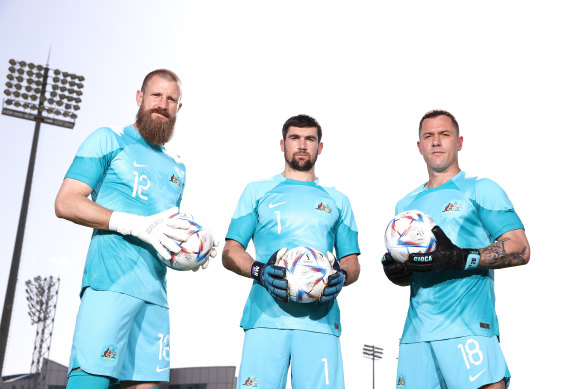 What role that is for him remains to be seen. Redmayne is realistic about his standing within the Socceroos as a back-up to skipper and chief custodian Maty Ryan, which leaves him in a neck-and-neck battle at training each day with Danny Vukovic to be his replacement, if one is required at any stage.

“Maty’s a consummate professional and anything I can do to help him perform and prepare for matches, I’m more than happy to,” Redmayne said.

“There’s no sour grapes at all. Everyone’s a collective and everyone buys into the unity. I won’t name names, but a player that spoke yesterday said he hasn’t played, and he wants to play – but having said that, he’ll be the first one to put his hand up and help prepare and give everything to better the team’s performance.”

It seems Redmayne is also aware there as an emergency option in case another shootout eventuates, in the unlikely event Australia advances to the round of 16 – or, perhaps, if there’s an injury-time penalty awarded against the Socceroos and Graham Arnold wants to psyche out the opposition again.

The Socceroos have new kits at this tournament, so he could be the ‘Maroon Wiggle’, the ‘Turquoise Wiggle’, or even – poor Jeff – the new ‘Purple Wiggle’.

He was coy when asked about those possibilities, and said Arnold and goalkeeping coach John Crawley hadn’t gone into “that kind of detail yet”.

But that’s a bit hard to believe when you consider the insane levels of detail all they went to in preparation for Peru, and the fact that, in almost the same breath, Redmayne said: “Of course, JC is one to tick all the boxes and it’s certainly been the case this camp, as well as every other game.”

There have been a few foreign media outlets lobbing at Australia’s Aspire Academy base to ask Redmayne about that match against Peru – after all, he was genuinely one of the biggest talking points in world football for a few hours in June – but he sounds pretty eager to move on and create more history, instead of harping on about what’s been done.

“I haven’t mentioned Peru at all. That’s obviously a lie,” he laughed. “It is what it is, I guess.”

Watch every match of the UEFA Champions League, UEFA Europa League and UEFA Europa Conference League on Stan Sport. Returns for the Round of 16 in Febuary 2023, with all matches streaming ad-free, live and on demand.