‘Every game you play with this team is to win’: Interim Sporting Lisbon boss Tiago Fernandes vows to play to win before Europa League visit to Arsenal

Tiago Fernandes is aiming for victory at Arsenal as the interim coach of Sporting Lisbon looks to make his mark on the Europa League.

Jose Peseiro left Lisbon last week having only been appointed in the summer, with Tiago stepping up from the youth set-up to take the reins on a temporary basis.

Sporting endured a difficult summer as a host of players departed following an attack on the club’s training ground by disillusioned supporters. 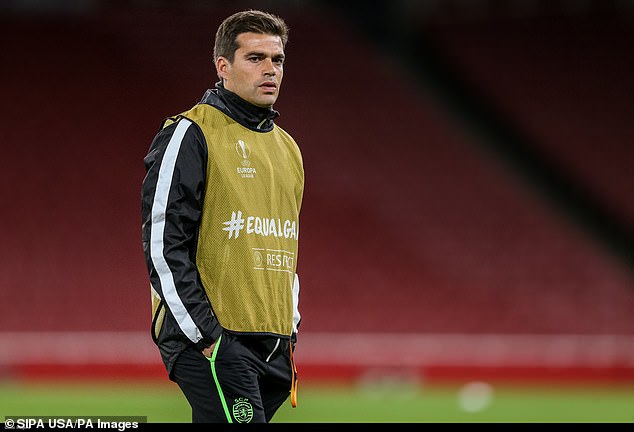 Peseiro replaced Sinisa Mihajlovic, who lasted just nine days in the job, with Tiago the third man to take charge of the side this season.

He guided Sporting to a 2-1 victory over Santa Clara in the Primeira Liga at the weekend but has the task of trying to get a result from Arsenal at the Emirates Stadium on Thursday.

‘As manager of Sporting, every game you play with this team is to win,’ he said.

‘I do what the chairman has asked me and tomorrow I will do the same as I have throughout the week. I have had help from the players.

‘That motivates me and I have happiness to represent this team in the competition and to manage players with this quality.’ 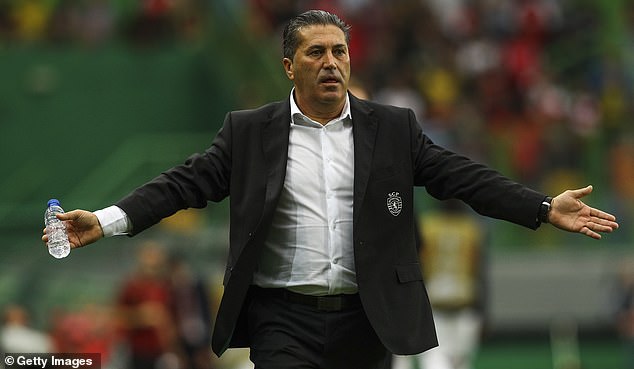 Tiago has guided the Sporting Under-19s to league success but is not expected to be given the senior position on a permanent basis.

Al Jazira coach Marcel Keizer is rumoured to be close to agreeing terms to be Peseiro’s full-time replacement – but Tiago insists he will do whatever is needed of him moving forwards.

‘I will carry on with Sporting while they need me,’ he said.

‘I’m always here to help Sporting, however long the situation is. I will be ready to give a contribution to the team, I have been here eight years and I will not comment on the rest.

‘I’m here to help, whatever they need me to do. Regardless of what position, I am not that bothered, I’m bothered about tomorrow’s game.

‘Luckily in eight years I have shown how I can help and I will be ready for anything. I will always have a huge amount of gratitude for the club, regardless of what the situation is.’

Sporting, under Peseiro, lost the reverse fixture a fortnight ago as Danny Welbeck’s goal settled a forgettable contest in Arsenal’s favour.

However, Tiago can call upon striker Bas Dost and experienced defender Jeremy Mathieu – who were both injured last time out.

Victory in north London would go a long way to sending Sporting into the last 32 but defeat would present a chance for Group E rivals Vorskla Poltava to apply pressure with two games remaining.