A three-time trophy winner with Melbourne Victory, Ben Khalfallah has split loyalties in Group D. He was born in France to Tunisian parents, and represented the ‘Eagles of Carthage’ on 14 occasions at international level. Since retiring, he has settled in Melbourne and has become a player agent who helped move talented Adelaide United products Mohamed Toure and Yaya Dukuly to Ligue 1 outfit Stade de Reims.

They are part of a new generation of Australian talent coming through that Ben Khalfallah is genuinely excited by — but the 40-year-old is equally frustrated with the “closed eyes” mentality within the game, and how quickly some back home have dismissed the threat posed by Tunisia.

“Australia should go there and be more humble. That’s the way I see things. We are so far away from everything, and people sometimes, they just watch the Premier League, the big countries, and that’s it.

“They’re going to have to be at 200 per cent to beat them. Are they [Tunisia] the weakest team next to France and Denmark? Yes. But the difference between those teams is not massive.

If I have to put my money on something, I would definitely put it on Tunisia. They just have better players.

“There’s so many other good countries, and especially in Africa. But in Australia, it makes me laugh when people see Tunisia and say, ‘That’s three points there’. Good luck, man. I know Australian football and I know Tunisia. Definitely not on paper when you know the football, and you know the team: no. It’s not about disrespecting Australia, it’s just reality. It’s ignorance, and it’s also like, lying to people. Go there, look at what they do.”

Much of the perception is shaped by the lack of notable superstars in Tunisia’s team. But if they and the Socceroos were lined up next to one another, Ben Khalfallah said he would probably only pick two or three Australian players who were better, among them goalkeeper Maty Ryan and midfielder Ajdin Hrustic, whose fitness remains of concern.

He also tipped that Tunisia’s defence would not be torn to shreds by France in the same way Graham Arnold’s men were in Wednesday’s 4-1 defeat, which put a huge dent in their goal difference and leaves them most likely needing two wins to progress to the next round in Qatar.

Tunisia held Denmark to a scoreless draw in their opening match, and with a crowd of over 40,000 behind them at the Education City Stadium in Doha, they had the highly-rated Europeans shaken by their physically and tactically tenacious approach. 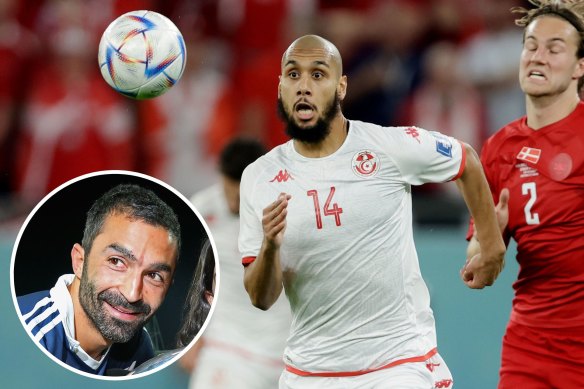 Ex-Melbourne Victory star Fahid Ben Khalfallah has sounded an ominous warning about the strength of Tunisian football – and the quality of their players, like midfielder Aissa Laidouni.Credit:Getty

Their central midfield pairing of Ellyes Skhiri and Aissa Laidouni, a classic creator and destroyer combination who play for German Bundesliga side 1.FC Koln and Hungarian champions Ferencvaros respectively, made it difficult for the Danes to play through them. Frontman Issam Jebali — a clubmate of Socceroos left-back Joel King at Odense BK in Denmark — had chances to win the match for Tunisia.

Frighteningly for Australia, their most recognised striker — Montpellier’s Wahbi Khazri — didn’t play, and will be fresh for a clash that, like the Socceroos, Tunisia must win to have any hope of getting out of the group.

Ben Khalfallah pointed to the way Morocco outplayed beaten 2018 World Cup finalists Croatia in a scoreless stalemate as proof of the quality of northern African teams.

“You know when we talk about Brazil and South America? Africa is exactly the same,” he said. 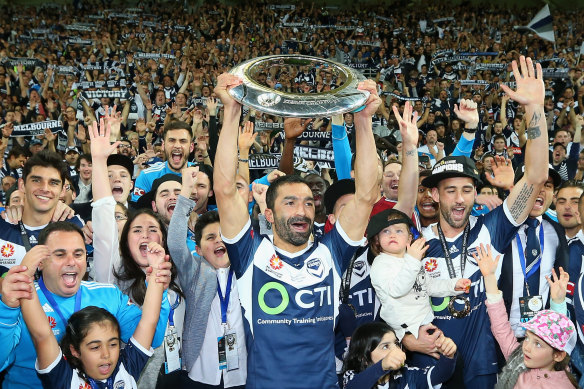 “To play in Africa is so hard. For example, in Tunisia, the two or three biggest clubs — Esperance de Tunis, Etoile du Sahel and Club Africain — they have money. Those clubs are massive, they’re bigger than heaps of clubs in France or Italy in terms of in terms of followers, the pressure they play in because the people there, they just love the game.

“Australia, I’ve always said, we have an amazing country — in my opinion, the best country to live. It’s just so good. But at the same time, it’s actually too good, because people have everything. In Africa, they don’t. They have one ball, they can go outside and they can play football. That’s it. So everyone does that, from the youngest age, play on the streets, so it’s very different.”

While his heart lies with Tunisia, Ben Khalfallah said the key to victory for the Socceroos is to play on the front foot — and stay there, instead of backing down as they did against Les Bleus.

“They need to play like more aggressive, they need to press and everything. Arnie’s going to prepare his team, he probably knows now more about Tunisia than he did [before the Denmark game],” he said.

“I know the Tunisian team, and in my opinion, they’re better. Of course, Tunisia is not the same level of France or Brazil — 100 per cent, they’re far from there. But it’s still a better team, in my opinion, than Australia.

“If I’m objective, yeah, of course they can beat them. But if I have to put my money on something, I would definitely put it on Tunisia. They just have better players.”