Jorginho converted the decisive spot kick as Italy beat Spain 4-2 on penalties after their Euro 2020 semi-final ended 1-1 after extra time on Tuesday (Wednesday AEST), earning them a place in Sunday’s final against either England or Denmark.

Spain missed two of their spot-kicks, including one by substitute Alvaro Morata, whose late equaliser had taken the game into extra time. 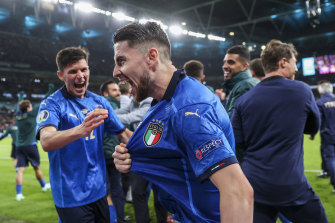 Jorginho celebrates after his penalty sent Italy to the final of Euro 2020.Credit:AP

After a cagey first half Italy struck on the hour when a fast-paced break begun by goalkeeper Gianluigi Donnarumma ended with the ball falling for Federico Chiesa, who cut in from the left and curled in a superb finish.

Spain levelled 10 minutes from time when Morata, dropped from the starting team after a run of poor finishing displays, played a clever one-two with Dani Olmo to open up the Italian defence and calmly slot home to take his team into extra time for the third successive game.

The Azzurri finished runners-up in 2012 and 2000 but have been crowned European champions just once, on home soil in 1968.