For almost two years, Hussain Ramazani did his best to escape the cruel reality of life inside Nauru detention centre. He was sent there in 2010 after fleeing Afghanistan to seek asylum in Australia having travelled by boat.

A Hazara man, Ramazani faced persecution from the Taliban insurgents near his home of Mazar-i-Sharif, where his father had been killed years earlier. However, he arrived in Australia to indefinite detention amid uncertainty around his refugee status. 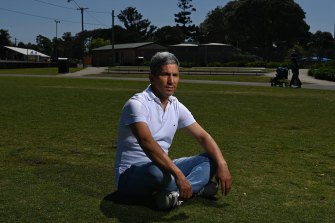 “We can find more good ways to help each other”: Afghan refugee Hussain Ramazani backs Football Australia’s plan to settle others into football clubsCredit:Nick Moir

He wasn’t alone and the anguish of uncertainty compounded by the heat, the poor conditions and lack of liberties was unbearable for most. However, when the small football competitions organised by Ramazani kicked off, all of that was forgotten for a few hours each game day.

“Inside the detention centre, too many people had mental problems so I organised football to make them busy,” he said.

The success of the small competitions in Nauru taught Ramazani a valuable lesson in the power of connecting through sport. When his refugee status was approved 20 months later, he immediately set out to use football as a tool to help the Afghan community in Sydney.

“I am here in Sydney and I do work with the community to develop football among the Afghan community, especially the Hazara people,” he said. 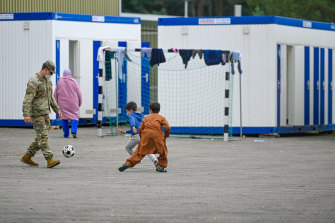 Over the past nine years, Ramazani has dedicated himself to the Australian AFG Football Association. It has no official status. It operates well away from the umbrella of sanctioned football but provides a significant role in helping Afghani migrants connect, play and be promoted within their community.

The flagship event is their annual national tournament, where teams such as “Hazara All Stars”, “Ghan Adelaide” and “Afghan Premiers” compete for honours against their kin. Among those to shine brightly there was Brisbane Roar and Australian youth international Rahmat Akbari.

“It’s incredible. There are over 20 teams and most of them are Hazara people. It’s a national tournament that’s been happening every year. You get teams from all over Australia and even New Zealand,” Akbari said.

Using nothing but their own networks, it’s been a huge success helping Afghan migrants – many of whom are refugees – adjust to a new home. But operating outside official football federations has its limitations. When Akbari learned Football Australia had reached an agreement with the federal government to help resettle thousands of incoming Afghani refugees into organised grassroots football clubs, his excitement was audible. 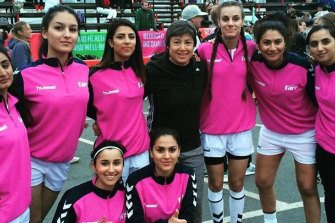 “It’s just incredible. A lot of people, they don’t even know what clubs are back home in Afghanistan. They wouldn’t play for a club, they don’t get coaching,” Akbari said.

The Australian government is facilitating the arrival of at least 3000 Afghanis fleeing the Taliban takeover, including the national Afghanistan women’s national team who are in hotel quarantine on Australian soil. Those players and thousands of others will have their registration covered and arrangements made for them to be part of local grassroots football to help their integration and settlement in a new home.

“Football is the first love of Afghanistan, and as Australia’s largest club-based participation team sport, and as the most diverse, multicultural and inclusive sport, the game of football is uniquely placed to help our newest Australians re-establish a sense of community and to support families to rebuild their lives here at the appropriate time,” Football Australia chief James Johnson said.

“As a football nation at the forefront of the women’s game globally, we pay tribute to the Afghani women who broke new ground in building the women’s game and we stand ready to support the government and them as they build their new lives in Australia”. 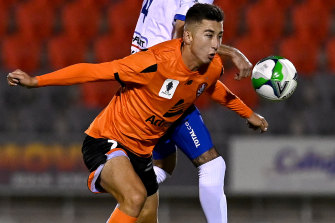 The partnership will begin with the flux of Afghan arrivals fleeing the Taliban rule after the fall of Kabul. If the football settlement plan is successful, it will be rolled out for all new refugee arrivals into Australia. At the age of five, Akbari was one of those. He had to wait for three years until he played organised football and even then, it only came about by a chance invitation when he was noticed at a kick-around in a park in Brisbane.

“It really helped us in the community, finding the culture,” Akbari said.

That social benefit is why Akbari uses his free time to coach kids at his local club in South Brisbane that is largely comprised of Hazara refugees.

“There is potential with Afghan players but they haven’t been coached, it’s just raw talent,” he said. “If they transition into a club with good coaches I think there’s potential to create good players but also it benefits the community. It helps them learn English and learn the Aussie culture as well.”

For those Afghanis here in Australia, football alone won’t erase the heartbreak of what’s happening back in their homeland. But it can play a role to help those who are escaping it.

“We are humans in a hard situation, we are in Australia with COVID-19. Compare this horrible situation to the people in Afghanistan for the ethnic groups, the women especially. Now it is so hard just thinking about that,” Ramazani said. “But this [football settlement] helps the people to be healthy first and then to come together as a community, to make communication and make some friends from other parts of the city. Here we can find more good ways to help each other.”