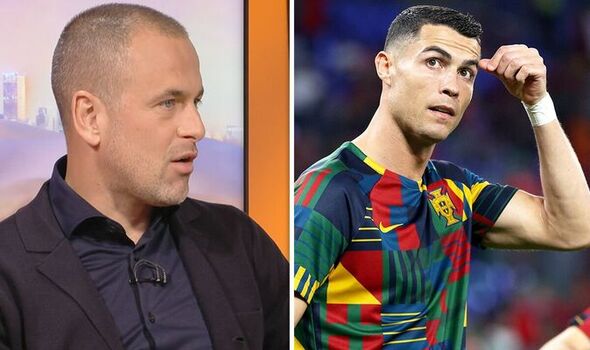 Chelsea hero Joe Cole has refused to comment on whether he would want Cristiano Ronaldo to join his old club. The pundit refused to answer when asked by Graeme Souness on ITV’s coverage of the World Cup on Thursday.

Ronaldo had his contract at Manchester United terminated earlier this week following his explosive interview with Piers Morgan. The Portugal superstar is now on the lookout for his next club while the World Cup continues in Qatar.

Portugal began their campaign on Thursday afternoon, facing Ghana in Group H. Ronaldo was named in the starting XI and he was a topic of discussion in the build up to kick-off.

Cole played for seven club teams during his professional career but is most fondly remembered for his seven-year spell at Stamford Bridge. Sitting alongside Cole in the punditry studio, Souness directly asked about Ronaldo.

He said: “Would you take him at your old team?” But Cole dodged the question by pretending he didn’t know which team Souness was referring to.

Cole replied: “Would I take him at my old team? Which one? Tampa Bay Rowdies might not be able to afford him! Listen, he’ll still score goals, he’ll still have an effect on this World Cup.”

Souness responded: “So you’re not going to answer it?” To which Cole simply said: “No.”

Chelsea were interested in signing Ronaldo in the summer. Owner Todd Boehly was keen on a deal but the then head coach Thomas Tuchel was against the idea.

Cole believes Ronaldo will now play with freedom in Qatar and reckons he already has his next club lined up. He added: “I think he will be liberated, he’s drawn a line under it.

“No doubt he and his agent will have something up their sleeves, they’ve probably got his next club sorted already. But listen, there’s only [Lionel] Messi I think who stands above him as the greatest of all time.”

Meanwhile, Souness has backed Ronaldo to have a successful fifth and final World Cup of his career. He said: “I think he will be relieved.

“He’s a player that enjoys the limelight and the spotlight’s certainly on him. All the questions will be asked on where he’s going to end up but he’ll relish the challenge.

“This is his last World Cup and he’ll see it as a chance to go out with a real big bang.”