‘One thing I love about this place is the culture’: Crystal Palace’s longest-serving player Joel Ward on the importance of chairman Steve Parish, ‘incredible’ Patrick Vieira and his own guiding faith

Throughout his life, Joel Ward has appreciated the importance of constants. The constant, unwavering belief in a higher power that formed the values of the man sitting in the media room at Crystal Palace’s training ground.

And the constant, familiar faces that have forged a steadfast culture at the heart of his ever-changing club.

He’s one of them. No player has been at Palace as long as Ward. He’s been there more than a decade. No one has felt the glory of promotion and stayed every step along the way. Even Wilfried Zaha joined Manchester United for a bit. 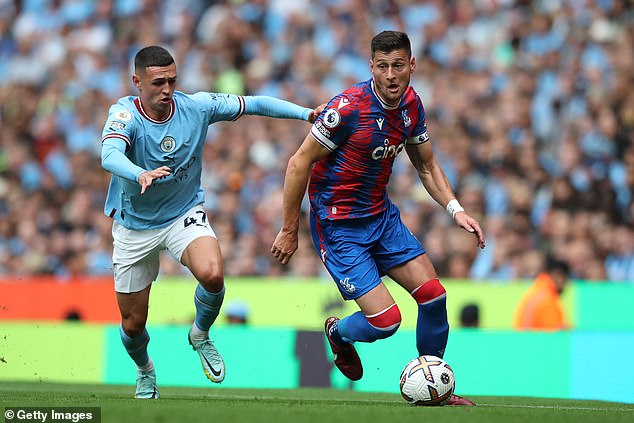 He’s seen the club change and grow, on to his 10th permanent manager in Patrick Vieira. Through the days of Ian Holloway and Neil Warnock, Alan Pardew and Roy Hodgson and, now, under Vieira developing a new identity and style of play.

And yet while much has changed, what matters is what has remained.

‘One thing I love about this place is the culture,’ says Ward. ‘The surroundings have remained and that has given the club the foundation to push, the influx of the academy, the players we are attracting, we’ve gone on a journey. 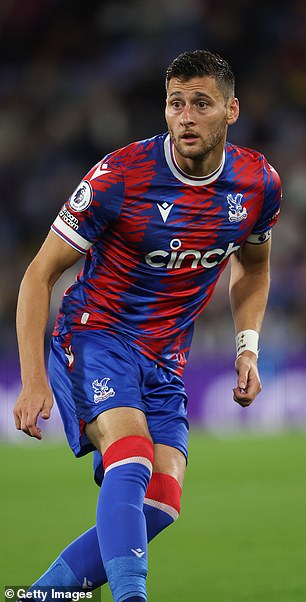 ‘It’s not a journey where you come up and splash cash and that’s it and drop back down, it’s been a real gradual building process and I think it’s been exciting to go on that journey, to see so many different faces come through the building and so many big characters.

‘Now we are in a position where it’s been a big transition period. We’ve changed the style, the philosophy, we’ve changed a lot, but the culture has remained in many ways: the way we go about things, how we do things, the standards, the drive from the chairman right down to the players and staff and everyone that’s involved at the club.

‘We’re all on the same page, we all know what we want, and that’s to improve, set standards and continue to raise the bar.’

Faith binds everything Ward does. A devout Christian, who grew up in the New Life Christian Church, an evangelical group, in Emsworth.

His parents, Phil and Kim, formed part of the church leadership team and helped look after the grounds. Ward and his brother Alex lived with them on the estate while as many as 40 students from all over the world travelled there to study the Christian faith.

Ward kneels on the pitch to pray before every game. He has a verse from Corinthians tattooed on his arm. It shapes his life and his football.

‘It’s given me a moral compass, it’s given me an anchor besides my family and my circle, my wife and kids,’ says Ward.

‘The church has given me an anchor to hold on to, somewhere where I can get away from things, I can cast my burden so to speak, and just talk and have support which has been the biggest thing, just having that community. It’s been a constant throughout my life and kept me steady and consistent.’

It’s not always made becoming a footballer easy, though. Until the age of 16, he could only play for Portsmouth, his first club, once a month because matches took place on Sundays when he was at church.

At Palace, there’s another big man upstairs that Ward feels has been key to Palace’s foundations, another constant among Ward’s list of his biggest influences. 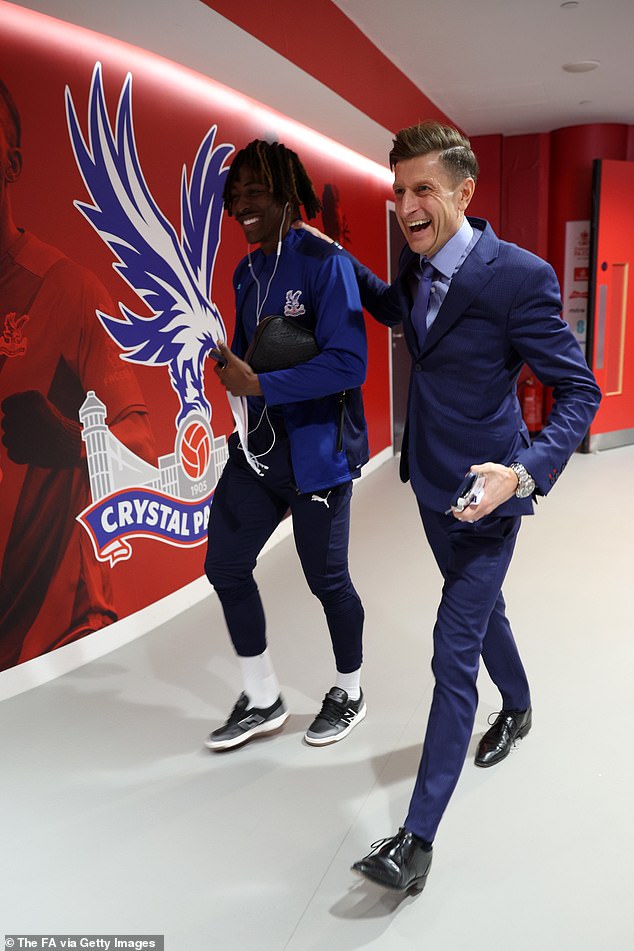 ‘Managers have come and gone. The chairman, Steve Parish, has been huge in the process from start right up until now. He has helped transition and guide that process through the whole period.’

Another is Zaha. ‘Wilf is gifted beyond so many people,’ says Ward. ‘For so many years, Wilf has taken it on his shoulders to be the star man, the main man for us. He’s carried that.

‘Coming from the area as well has given so many people the belief they can do it and go on to create a career for themselves. He is a poster boy for the club who embodies what Crystal Palace is.’

Ward is happy for Zaha to be on the posters. Ward is happy to do his bit and step away from football when he needs, to spend time with his wife Jess and his kids.

He’s ready to take the younger players at Palace under his wing. In the same way Lee Bradbury and Sami Argo did for him at Bournemouth. The way Linvoy Primus did at Portsmouth. Ward is a big supporter of Primus’s charity Faith and Football.

‘They set the standard and you saw the culture and what was expected of you. There is some incredible talent here and they have such bright futures ahead of them. 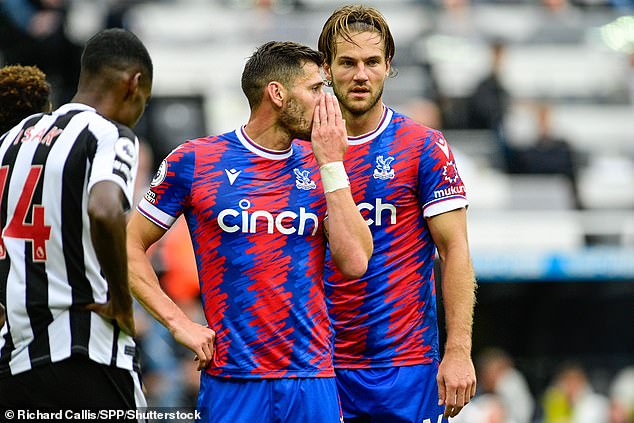 ‘If I can play my part in helping them develop on and off the pitch, that is something equally special to be a part of.’

Were it not for Ward, Palace might not be here at all. It was his head, deep into their triumphant Championship play-off final nine years ago, that nodded Watford forward Fernando Forestieri’s shot off the line.

‘I can see it now,’ says Ward. ‘He’s cut inside and clipped it with the outside of his boot. Danny Gabbidon and I were on the line. All I remember is Gabs looking towards me as I’ve cleared the ball and then it was just get up, get out and get on with the rest of the game.

‘To be a part of something which was, in many ways, a history-defining campaign and going on a journey with the club has been a bit of a fairytale. It’s been a rollercoaster but in many ways the time I’ve had here has been precious, a real honour and hopefully it continues and we keep growing as a club and keep going on the path they are going on and the ambition they have set because I think this club has incredible foundations to do so.’

And now it’s growing under Vieira. Ward admits he was not sure what to expect when Patrick Vieira took over.

He calls Vieira one of the first ‘new era’ managers he’s worked under, those former players with exceptional careers on the pitch now trying to forge their path off it. This famously fierce midfielder, feather-ruffler of Roy Keane. 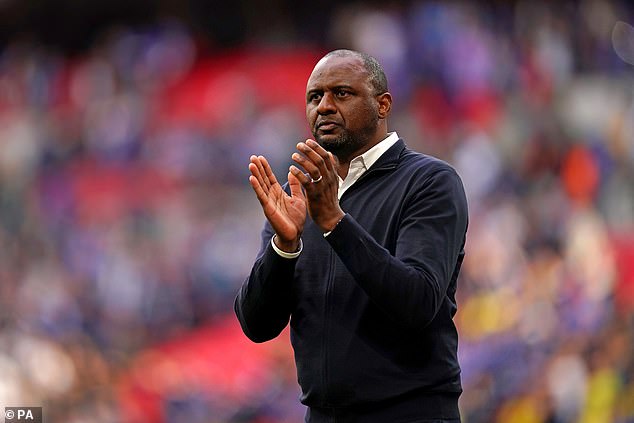 ‘It’s been incredible to see what the gaffer brings,’ he said. ‘We all know his football career and what he achieved. That list speaks for itself. There’s a different side to him where he brings the best out of people.

‘He has time to talk and help people grow, not just on the football pitch but as a character and a person. That stems from him being a leader throughout his career. He has that stature as a man, and he has that character that you can approach him.

‘He demands from you, he expects you to perform, to get better and develop and raise that bar.

‘He sets those standards because he’s a winner. He wants to achieve and to be successful. But he’s also someone that can put an arm around someone, and bring out the best in them.’

It was supposed to be United on Sunday. Another chance for Palace to prove what they’ve become under Vieira against the big opponents.

They drew with Liverpool on the opening day, were 2-0 up against Man City before Erling Haaland changed that. Now, with the games postponed, it will have to wait.

United, meanwhile, are a club trying to find itself again. ‘United have gone through – and are still in – a period where they are developing and changing and transitioning and there is a lot of work for them to do to get back to where they want to be, not just on the pitch but off the pitch.’ 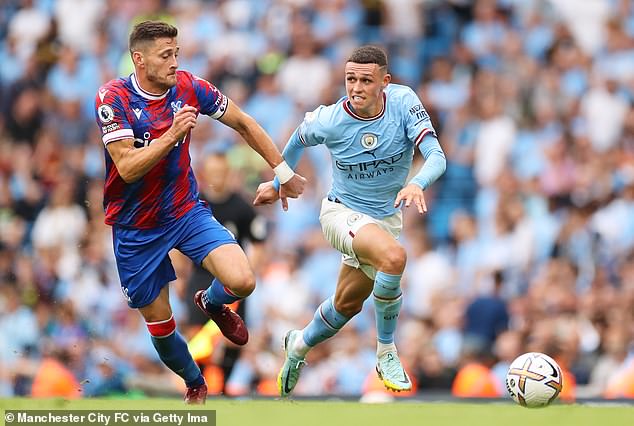 Ward pauses when asked if United still have an aura. ‘I think there was a period of time [when they did], yes. I think they are searching for that again. They are still one of the biggest clubs in the world. They will, eventually, get back to the force they want to be.

Ward sees the parallels with what he’s been through at Palace over the years. The need for everyone to be off the same hymn sheet, from board room to ball boy.

He was listening to Gary Neville talk on Steven Bartlett’s Diary of a CEO podcast a few weeks ago talk about the need for United to build the right culture again.

‘They had that for so many years. We all know about the Class of 92 and the culture and the success they had. For so many years they were at the top.

Members of that era want to see the club back where it should be. That comes from, like here, when you have the top to the bottom all in unison and working together.’