Jose Mourinho accused Tottenham of failing to kill off the game as Roberto Firmino’s late winner saw Liverpool leapfrog them into top spot in the Premier League.

Spurs were level at the break after Heung-Min Son scored a fine counter-attacking equaliser after Mohamed Salah’s deflected opener, despite the Reds dominating possession.

But Spurs pushed on in the second half, creating a host of chances to secure a rare Anfield win as Steven Bergwijn rattled the post and Harry Kane headed over from six yards.

Firmino then headed the winner in the 90th minute as Spurs missed the chance to lay down a marker in the title race as Liverpool extended their unbeaten league run at Anfield to an imperious 66 games.

“I think even a draw would have left us not with the best taste because we had them there to win it,” Mourinho told his post-match press conference.

“It was not just about the big chances, it was the moment of the big chances. The moment was when they were in trouble, in their worst moment, and we had it there to kill it and we missed it.

“Normally, in matches of this level, you pay [for] it. I thought we were going to pay [for] it by just taking a point, but in the end, we did not even take a point so it is very disappointing.”

“Today, I really think, in such a difficult game against such a good team, the boys were very good, and we are punished.

“Steven Bergwijn was face-to-face with the keeper two times, we had the corner when Harry [Kane] had the free header, we had other counter-attacking situations that we did not finish. We had it, we knew how to hurt [them] and we should have done much better than we did.”

The defeat was Spurs’ second of the season – and first since the opening day against Everton – and they now trail the champions by three points having gone into the top-of-the-table showdown ahead on goal difference.

Asked how he would go about lifting his players ahead of Sunday’s trip to Leicester – live on Sky Sports – Mourinho said: “It is just to follow the same road. It is not because we win or lose here tonight that we are going to leave the road. The road is match after match.

“We have a big game again on Sunday against one of the best teams and we have to move on. Tomorrow we are there and let’s go for Sunday.”

Liverpool’s late victory left manager Jurgen Klopp delighted with a performance that was reminiscent of many last season which brought their first league title in 30 years.

“It’s been a tough period, a tough period not only coming up but one we’ve already been through,” he said. “To play a game like this tonight is absolutely exceptional.

“It was a top game and we deserved three points against a top side who, organisation-wise are very difficult to play against with the counter-attacking threat they have. I liked the game a lot.

3 – Roberto Firmino's header was only the third 90th minute winning goal v Jose Mourinho in the Premier League, after Mark Viduka for Middlesbrough in August 2006 and Oussama Assaidi in December 2013 for Stoke City. Drama. pic.twitter.com/SjqT6gQhmL

“We didn’t have too many times in the season where we had late moments. I have no problem starting it again scoring late if it is needed.

“Of course Tottenham had chances, they scored a goal with an unbelievably tight offside decision – we are really not lucky with these decisions at the moment. They had other chances – you cannot defend Kane, Son, Bergwijn for 90 minutes, the speed they have is incredible.

“But around those moments we were completely in charge of the game, stayed concentrated and protected our attacks sensationally well, counter press was good, passing was good.

“Not all of our efforts led to a goal or a proper chance because they were deep in the box and defended all of the high balls. We needed to be creative and the boys were creative, stayed creative and then forced it.

“The first goal we forced a little bit and the second with the set piece is really nice because we don’t have a lot of time to work on things and that worked out again.” 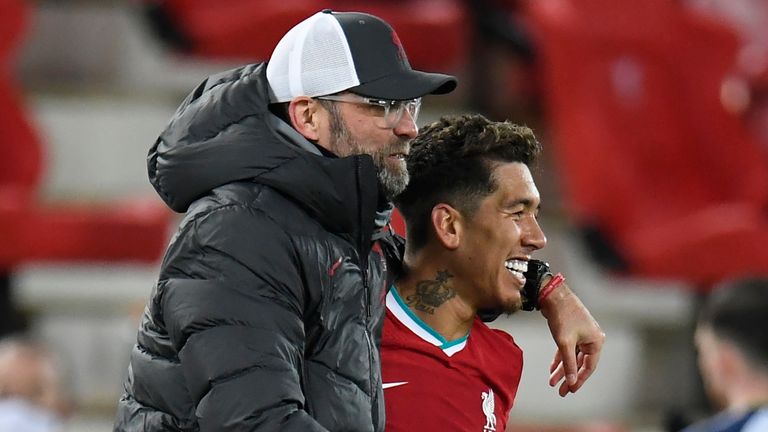 Klopp hopes Firmino’s crucial late strike helps the Brazilian in his efforts to ignore those who continue to question his effectiveness in front of goal.

“I hope he never doubts himself,” Klopp added. “In training, it never looks like he is, but there is so much talk about him it’s almost like people are surprised when he scores. He scores goal, important ones for us.

“For us, it’s not so much about who scores them, because the only thing that is important is that the ball is in the back of the net. The way we get there, there are a few obvious things like passing the ball, crossing and finishing, but also making the runs to open up the gaps for these things.

“People don’t see that. I’m not surprised Bobby scores goal, I’m happy for tonight because it was a very important one for us and for him, but more for us.”