Home » Soccer » Just how has it turned so sour for Unai Emery at Arsenal?

From a 22-match unbeaten run and reaching the Europa League final, to fans throwing their season tickets away and star players wanting out… just how has it turned so sour for Unai Emery at Arsenal?

The Gunners were well on their way to a 22-match unbeaten run, with a top four Premier League finish and a strong Europa League campaign on the cards in Emery’s first season in charge.

But fast forward to the present day, and Emery’s tenure is coming to a poisonous end after a dreadful run of form, coinciding with plenty of lacklustre performances. 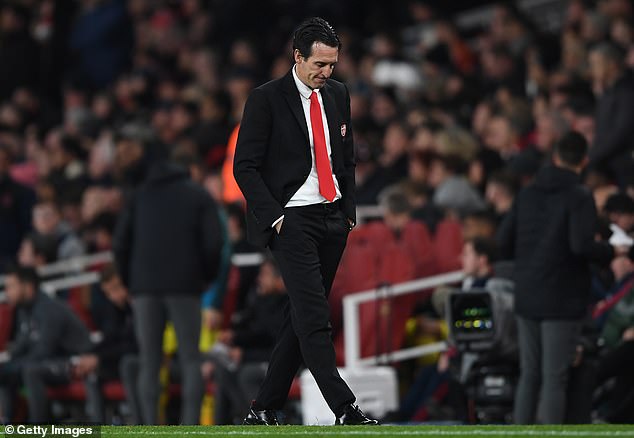 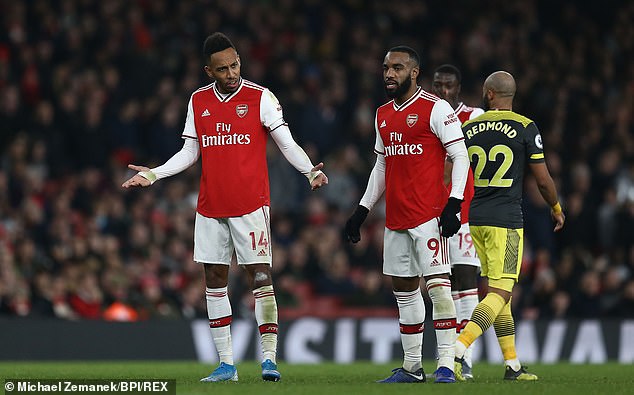 It has all turned sour at the Emirates again with an overwhelming number of supporters losing faith in their manager, while star players Pierre-Emerick Aubameyang and Alexandre Lacazette could potentially be on their way out.

Arsenal have already started searching for his successor, with the likes of Nuno Espirito Santo, Massimiliano Allegri and Mikel Arteta all being considered for the job of guiding the club forward.

Here, Sportsmail assesses what has gone wrong for the Spaniard in north London in such a short space of time…

EMERY’S APPOINTMENT MET WITH A BUZZ

Replacing the club’s greatest-ever manager always represents a monumental task but fortunately for Emery, his appointment came as a breath of fresh air after Wenger had lost the majority of the fanbase.

Under Wenger, the club were going stale – failing to secure Champions League football in two seasons on the trot – and needed new direction and above all, hope. Emery was that man chosen to deliver the goods.

On May 23, 2018, Emery was handed the key to the Emirates. For the majority, supporters were pleased to see the Spaniard, a three-time consecutive winner of the Europa League with Sevilla, given the job ahead of the inexperienced Arteta.

And he made moves fast in the transfer market, finally bringing in a defensive-midfielder in Lucas Torreira, a proven goalkeeper in Bernd Leno, and what would turn out to be a gem in Matteo Guendouzi. He also signed experienced duo Sokratis and Stephan Lichtsteiner to provide wisdom to the youngsters.

In his first ever press conference as Arsenal manager, Emery spelled out his philosophy: ‘My idea is to be the protagonist all of the match. The history here is one thing – they love to play in possession of the ball. I like this personality.’ The Spaniard appeared keen to build on the free-flowing legacy created by Wenger and the excitement was in full swing.

The supporters were ready to give Emery patience and support following Wenger’s 22-year reign. Top four was the target but above all, fans wanted to see a reinvigorated side given a new lease of life. 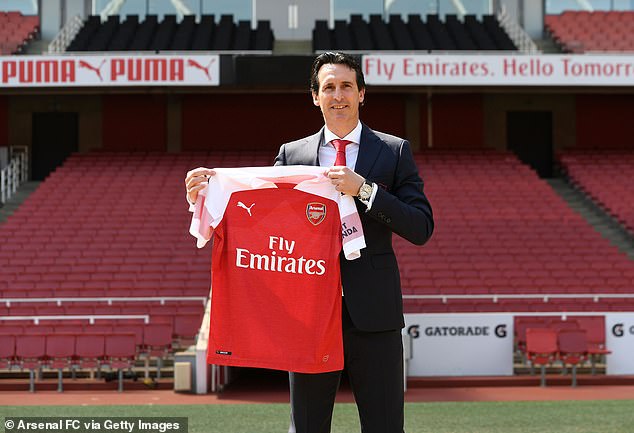 Emery’s tenure started off with back-to-back defeats in the Premier League but with those coming against reigning champions Manchester City and Chelsea away, the manager was given a free pass – he needed time to implement his philosophy.

West Ham at home on August 25, 2018, signalled Emery’s first victory as Arsenal manager and from there, the Gunners kicked on in style by going 22 matches unbeaten across all competitions before being beaten by Southampton away.

While not playing particularly well throughout all 22 games, they were still getting the results – showing a backbone and winning mentality that was lacking during Wenger’s final days.

And many supporters praised Emery’s management during this run, making the correct substitutions at half-time to turn the game on its head. At long last, it appeared Arsenal had more than just a Plan A.

Highlights of the unbeaten run included their 5-1 thrashing of Fulham away, where they played some exhilarating football. Fans had warmed to Emery and finally the team again. Chants of ‘We’ve got our Arsenal back’ were sung loudly from the away end at Craven Cottage and the new dawn was beginning to take shape.

Nearly two months after their victory in west London, Emery then enjoyed his most memorable moment as Arsenal manager – guiding his side to an enthralling 4-2 comeback victory over north London rivals Tottenham. The Emirates was a cauldron of noise and ferocity, the passion had been brought back. 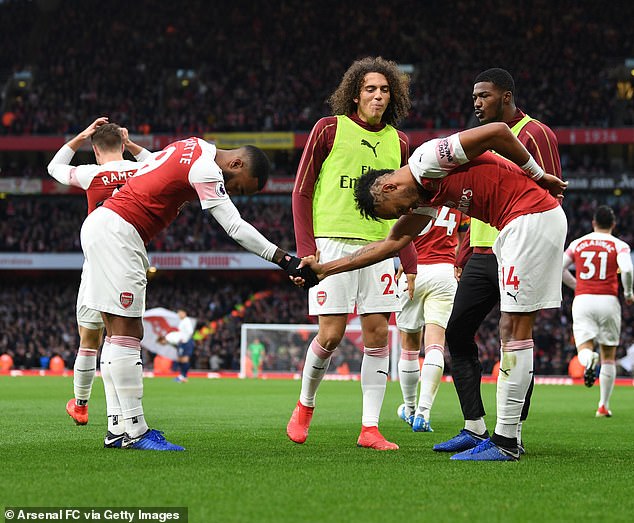 CHOKING IN THE RACE FOR A TOP FOUR

Fast forward to the beginning of April last season, Emery had guided Arsenal into a brilliant position to claim a much-coveted Champions League spot come the end of the season.

Victory at home to Newcastle put them in control of their own destiny with seven matches to go after inconsistency throughout the season from top four rivals Chelsea and Manchester United.

But with what was meant to be an easier run-in their rivals in the race for a Champions League spot, Arsenal somehow choked beyond belief and before they knew it, their dreams were nearly dead.

The Gunners won just two of their last seven, while drawing one and losing four – against Everton, Crystal Palace (home), Wolves and Leicester.

Emery’s side ended up finishing fifth, one point behind rivals Tottenham and two behind Chelsea. So with the Premier League done and dusted, Europa League glory was Arsenal’s final hope in their quest for Champions League football.

The Spaniard had come in for criticism for letting a top four spot leave their grasp but if they could win their first European competition since 1994, then all would be forgiven. 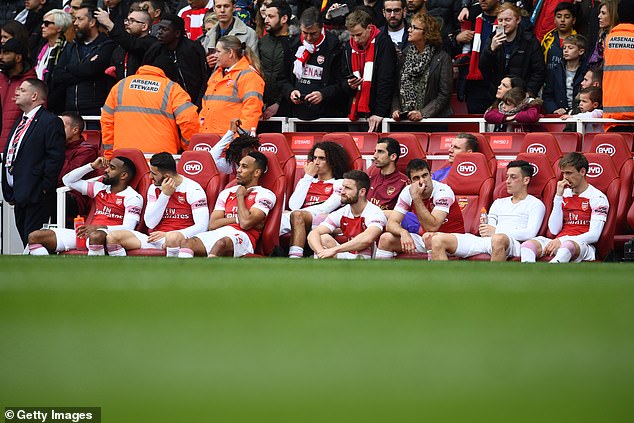 Come May 29, Arsenal’s season hinged solely on their Europa League final against London rivals Chelsea, who had already secured Champions League football through the Premier League.

After producing an impressive performance against Valencia away at the Mestalla to book their place in the final, confidence seemed to be restored at the Emirates. One more fine display was all that was needed to reach their target.

But what happened in Baku has continued to give Arsenal fans nightmares. After a goalless opening period, they were ripped apart 4-1 by Chelsea in the second half with former Gunner Olivier Giroud coming back to haunt them.

The Gunners had yet again choked when they needed to produce most and a third consecutive season in Europe’s second-tier competition was to follow.

Immediately as their hopes came crashing down, the inquest started and for the first time, Emery was under huge pressure. The embarrassing end to the season would linger all summer but in football, hope is always around the corner.

The 48-year-old was given a free pass in his first campaign but as soon as the 2019-20 season would come around, he would have to deliver. 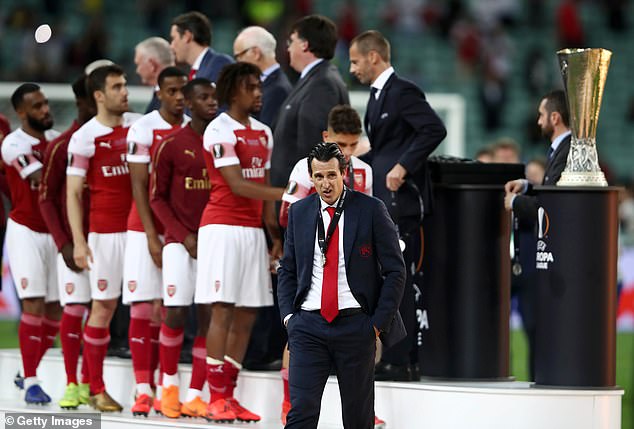 Arsenal’s season ended in nightmare, getting humiliated 4-1 by Chelsea in Europa League final

EMERY ON THE BRINK AFTER LOSING SUPPORT OF FANS

After signing Nicolas Pepe in a £72million deal, while Kieran Tierney, David Luiz, Gabriel Martinelli and Dani Ceballos (loan) followed him through the door, plenty of positive energy was coming out of Arsenal – with their top four rivals in limbo, this would surely be their year to clinch a top four spot again.

But following unconvincing opening victories against Newcastle and Burnley, it has been an atrocious start to their season and their top four hopes already look bleak.

The Emirates outfit are already eight points off Chelsea in fourth after 13 matches and the negativity is bigger than ever before. As well as struggling to produce the required results, their performances have been dismal – with Southampton the latest side to outplay Emery’s men.

Arsenal have failed to win any of their last six matches in all competitions – their worst run since all the way back in 1998.

Supporters are now counting down the days until Emery is sacked and replaced by a more inspiring and attack-minded manager, who can galvanize a club which is slowly drifting into mediocrity.

Following the draw on Saturday against the Saints, someone on Arsenal Fan TV took extreme measures by throwing his season ticket away. If it wasn’t depressing enough for the fans, star players – including Aubameyang and Lacazette – are stalling on new contracts.

Emery was brought in to take Arsenal back to the top but in fact, the club are now worse than they were under Wenger and have fallen even further off the pace. It is only a matter of time until the hierarchy pull the trigger. 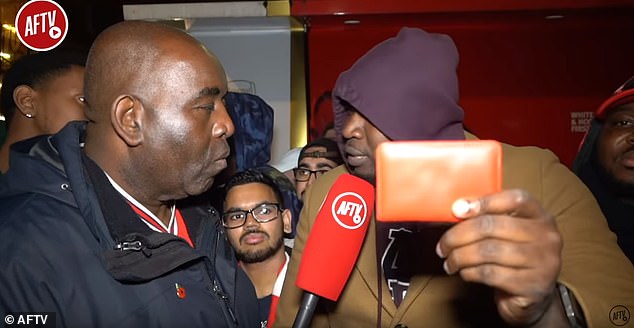