The Matildas failed to capitalise on multiple gilt-edged chances as they fell to a 1-0 loss to Canada in a pulsating international friendly at Suncorp Stadium.

Canada took a 1-0 lead into half-time thanks to a superb strike by Adriana Leon and three cracking saves by goalkeeper Kailen Sheridan when Matildas skipper Sam Kerr appeared certain to score. 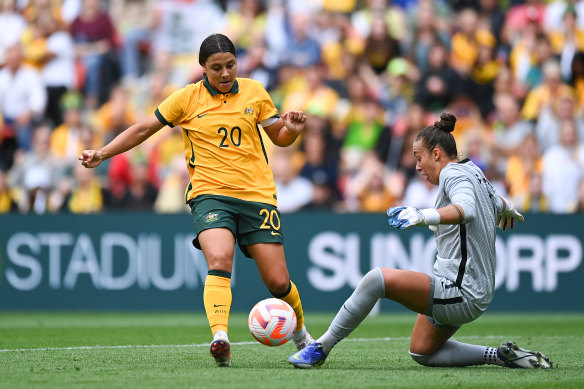 The first half was an open affair with 11 shots on goal. The Matildas had seven of them.

After the break it was end-to-end, with Australia allowing Canada far too much latitude while in possession, an area of their game they will need to improve before next year’s FIFA Women’s World Cup kicks off in Australia and New Zealand.

Matildas coach Tony Gustavsson said defender Charlotte Grant did a good job on star Canadian forward Nichelle Prince overall but admitted that when the game opened up his side “got exposed on the counter a bit too easy”.

“We weren’t intense enough in the first half. I think we were much more physical in the second half,” he said. 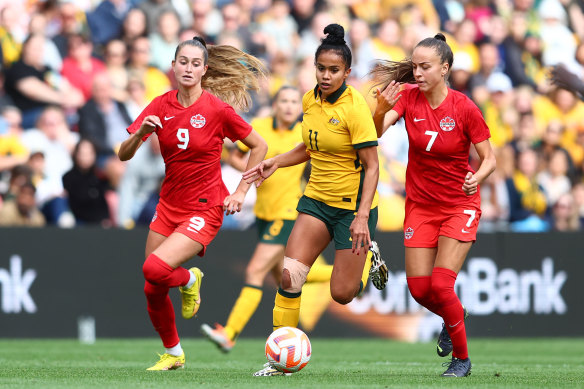 Gustavsson said the Matildas’ “never say die” attitude was in evidence at the end as Kerr went in search of an equaliser.

“Sam is a world-class goal scorer, and on other days she scores three and everyone is really happy and she’s happy,” he said. “It was just one of those days. We need to work on our final pass to set her up for success.”

Kerr laid a neat flick on for substitute Cortnee Vine to fire just wide in the 83rd minute as Australia pressed for the equaliser. Kerr missed out again in injury time when Sheridan tipped a header over the bar.

The Matildas were well served by 19-year-old midfielder Mary Fowler, who was busy throughout and involved in much of the good work done by the side.

Central midfielder Katrina Gorry was also outstanding, with her passes opening up opportunities for the forward line.

A header by Kerr in the fourth minute was superbly denied by a diving Sheridan after a neat cross from the left by Emily Van Egmond.

Canada opened the scoring in the 11th minute with a cracker. Leon, who plays on the wing for Manchester United, was given too much space by the Matildas just outside the box and the 29-year-old speared a rocket finish into the top-right corner.

An advancing Sheridan denied Kerr again after a slick through-ball from Gorry. Gorry, who took a year off in 2021 to have a baby girl, proved a constant threat.

The Matildas lost defender Alanna Kennedy to a leg injury before half-time and she was replaced by Aivi Luik.

With 320 days to go until the World Cup kicks off, Gustavsson has signalled that consistency and continuity in the team line-up will be the key as he tapers the side towards being at their best when the crunch games are on.

Gustavsson was not able to start this campaign with his best team, with seven starting players from the Tokyo Olympics semi-final side that lost 1-0 to Sweden unavailable.

Two of those – forward Caitlin Foord and defender Steph Catley – told Channel 10 before kick-off they were hopeful of being available for the second clash with Canada on Tuesday in Sydney.