Mateo Kovacic’s stunning goal helped a Chelsea side lacking direction and control fight back against Liverpool, and summoned up memories of Eric Cantona’s FA Cup final winner – it may also help cost the Reds the title

The last time Liverpool conceded a goal like the one Mateo Kovacic volleyed in at Stamford Bridge, it was delivered by the boot of Eric Cantona and cost them an FA Cup Final. This one – a quarter of a century later – may go some way to costing Liverpool the Premier League.

Goals change games and this one really did. Liverpool were two goals ahead and coasting when the ball dropped to Kovacic from Caoimhin Kelleher’s punch three minutes before half-time.

At that stage, Chelsea had not managed a single shot on target and lacked direction and control in all areas of the field. The reception awaiting Chelsea and their manager Thomas Tuchel at the break would not have been pleasant. 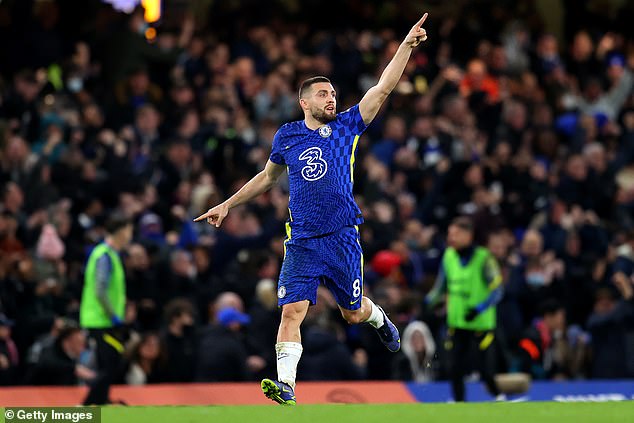 Mateo Kovacic celebrates his goal, which got Chelsea back into the game against Liverpool 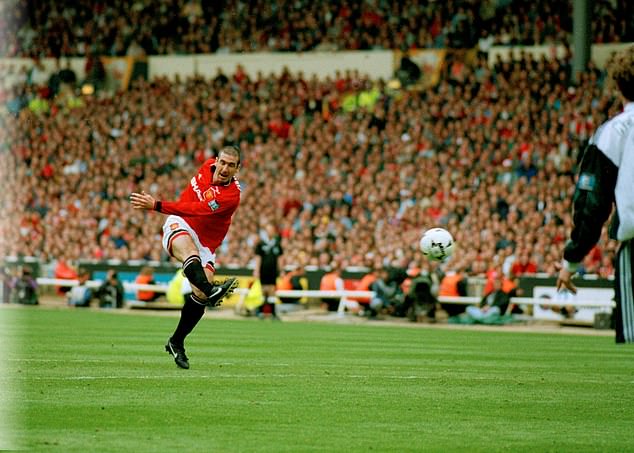 Kovacic was actually moving backwards as the ball arrived but – just like Cantona did at Wembley in 1996 – the Croatian somehow managed to find enough power with his right foot to direct it back whence it came and in to the Liverpool net off Kelleher’s left hand post.

It was a quite stunning goal, one that had to be viewed again to really be understood, such was the perfection of its geometry. It was one that not only changed the whole feel and course of this game but also robbed Liverpool of the opportunity to edge back towards the slipstream of league leaders Manchester City. As such it may yet be seen to have a telling impact on the whole season.

Prior to that moment, Liverpool seemed set fair for victory. They had scored two brilliantly taken goals and were threatening a third. But – with the atmosphere at the Bridge transformed – Christian Pulisic’s equaliser followed quickly and the visiting team never looked quite the same again. 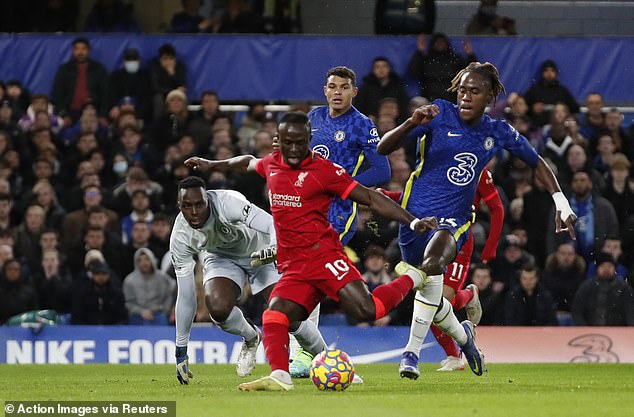 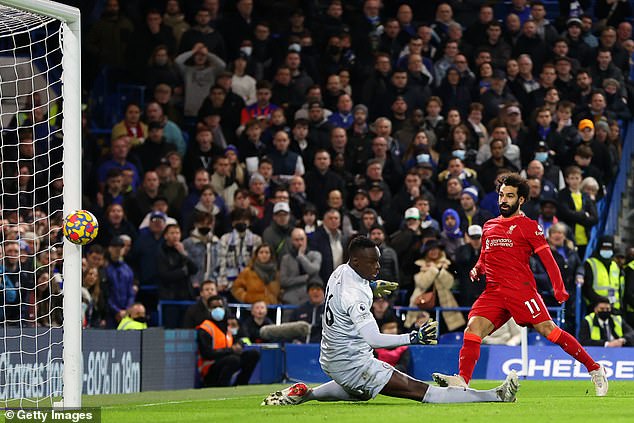 What a game of football this was. In some ways it served to illustrate that Pep Guardiola’s City are perhaps a margin or two better than either of these two sides. At this stage of the season, they seem to be anyway.

City have taken all of the last 33 available points to him while Liverpool have taken only two of their last nine and Chelsea seven from their last fifteen. During the most challenging period of the season, City have found their gears and their lead at the top looks a little ominous.

But if there are flaws in the make-up of Liverpool and Chelsea then they only served to make this game even more watchable. It was frantic, hectic, wholly unpredictable and all the better for all of that.

Liverpool were without their manager, first choice goalkeeper and two key outfield players. All were victims of Covid-19. The virus continues to influence the season.

They were recognisable in the way they attacked, though. The scorers, Sadio Mane and Mo Salah, were superb and will be missed enormously as they depart for the African Cup of Nations. That will present another problem for manager Jurgen Klopp. 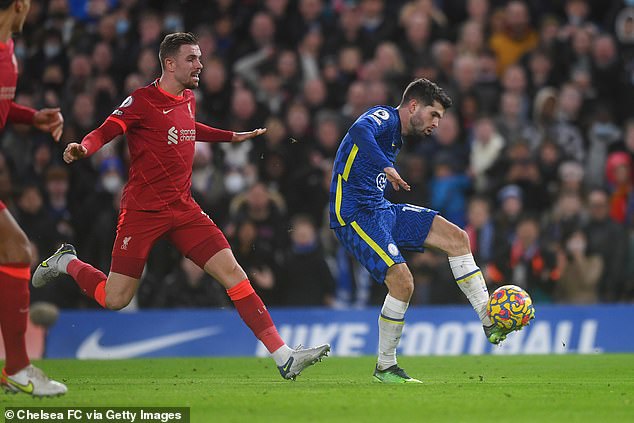 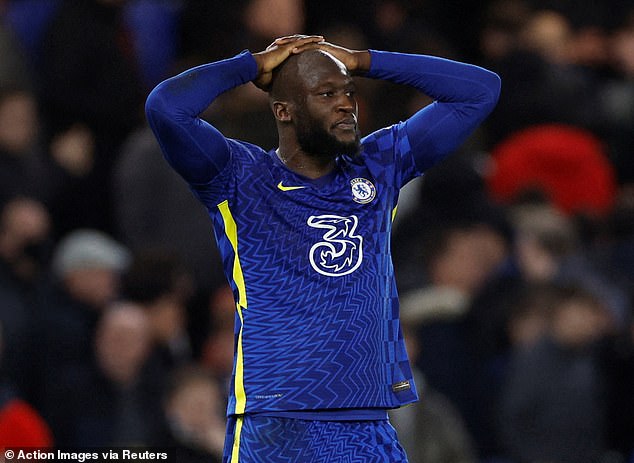 Chelsea, meanwhile, were sleep walking until they scored their first goal but perhaps the better team from that point on. It was that kind of game.

Coach Thomas Tuchel made a brave call by leaving out centre forward Romelu Lukaku and it’s clear a story started by the Belgian’s comments at the end of last week still has some way run.

In truth, Tuchel’s decision looked as though it may come back to bite him at one stage and even though Chelsea took a point here there was a time, with Liverpool tiring in the last period of the game, that it was hard not to wonder what kind of damage Lukaku may have been able to do as a substitute.

Chelsea do lack a focal point without an obvious centre forward, for sure. Lukaku was purchased last summer in order to solve a problem but is now in danger of becoming one if his manager does not manage to lay the issue to rest in the coming days.

Elsewhere, Chelsea had some of this game’s best players. Kovacic was impressive even without the value added by his goal while another Chelsea midfielder, N’Golo Kante, was arguably the most noticeable performer on the field. 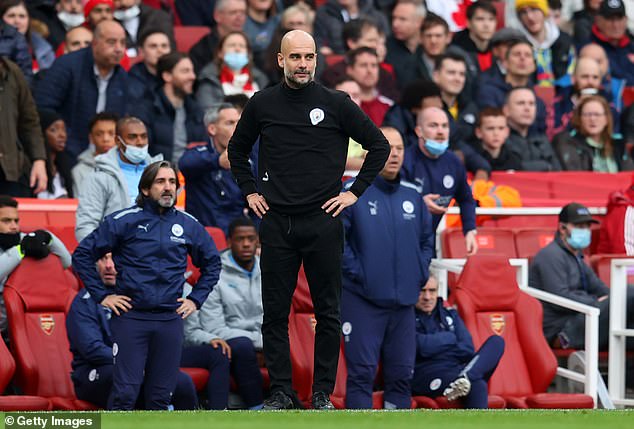 At the start of the second half, before fatigue began to affect players like James Milner, Liverpool were briefly dangerous once more. Salah and Mane sensed opportunity on more than one occasion but Kante possesses that innate ability to be on hand just as danger presents itself. The French international was magnificent once again.

In Manchester, they will not rue this outcome. Guardiola would have chosen a draw and a clear advantage now belongs to his team. Certainly, both Chelsea and Liverpool will have to beat them in order to claw back ground. They cannot expect other teams to do that job for them. Both those games – Chelsea play City in less than a fortnight while Liverpool face them in April – will take place at the champions’ Etihad Stadium so the size of the task is clear.

It is likely Chelsea and Liverpool will improve and come again this season. They remain some distance better than anything else the Premier League has to offer. But the standards set by City are incredibly high. At the top of the Premier League, draws feel like a disappointment while defeats can appear disastrous. After away games at Leicester and Chelsea that have stalled their progress, Liverpool know both those feelings well.