One of the A-League’s brightest young stars, Alou Kuol, is on the cusp of a “life-changing” move to Germany engineered by the same talent-spotter who discovered Robert Lewandowski, Shinji Kagawa and Pierre-Emerick Aubameyang.

Kuol came off the bench on Thursday night to score the winner in Central Coast Mariners’ pulsating 2-1 comeback win over Adelaide United – his seventh goal this season. 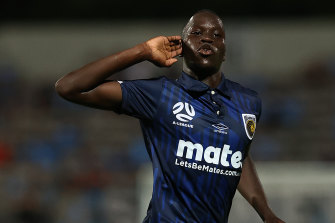 Alou Kuol has lit up the A-League this season, but his days in Central Coast Mariners colours appear to be numbered.Credit:Getty

But the 19-year-old forward’s days in the A-League appear to be numbered, with multiple sources close to the player confirming he is likely to agree to a transfer to Bundesliga outfit VfB Stuttgart at the end of the season.

Stuttgart sit mid-table in Germany’s top division but destroyed Borussia Dortmund 5-1 in December with one of the youngest squads in the Bundesliga. They had an average age of 24.9 years, and have a reputation as a leading development club in Europe.

Stuttgart’s sporting director, Sven Mislintat, earned the nickname “Diamond Eye” during his previous 11-year stint as chief scout at Dortmund for unearthing a golden generation of players at that club.

In addition to Lewandowski, Kagawa and Aubameyang, Mislintat also brought Socceroos Mitch Langerak to Dortmund – through the same agent, John Grimaud, who manages Kuol and took the likes of Robbie Kruse, Mathew Leckie, Josh Kennedy and Matthew Spiranovic to Germany over the years. 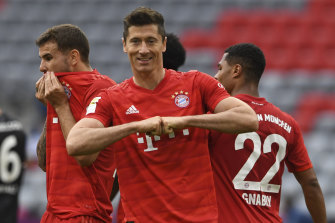 Robert Lewandowski was unearthed by the same talent-spotter, Sven Mislintat, who now has his eye on Alou Kuol.Credit:AP

After a brief stint at Arsenal, Mislintat joined Stuttgart in February 2019, helping them rebuild from Germany’s second tier to the top division. He now has his eye on Kuol, who has also attracted interest from other clubs in Germany and Belgium, according to sources.

The move would continue an incredible rise for Kuol, a product of the Goulburn Valley Suns in regional Victoria who was passed over by Melbourne Victory, Melbourne City and Western United – and briefly trained with AFL club Richmond’s next generation academy – before joining the Mariners in 2019.

The Mariners signed him to a senior contract this season, which will net them a six-figure transfer fee if the Stuttgart deal goes through – although the real money to be made for the club will come through sell-on clauses, entitling them to a slice of any future fees.

“We extended Alou’s contract a few weeks back, so he’s with us for next season at this stage,” Mariners chief executive Shaun Mielekamp said. “Whilst there’s interest, that’s exciting – it’d be great if all our players can get as much interest to go to Europe, and we’ll see how things play out towards the end of the season.”

Sources say the financial terms of the proposed contract would be “life-changing” for Kuol, who comes from a South Sudanese refugee family and has six younger brothers. Two of his brothers, Garang (Central Coast) and Teng (Melbourne Victory), have signed youth deals with A-League clubs.

Kuol would almost certainly begin life at Stuttgart in their reserves team – and while the opportunity to play in Europe may come a fraction earlier than many would have liked, since he is yet to play out a full season in Australia, his career trajectory could change dramatically if he can prove himself worthy of the level.

Despite his obvious X-factor, Kuol has been used primarily as a super-sub by coach Alen Stajcic this season, with the teenager making just four of his 15 appearances as a starter. He has now come off the bench twice to steer Central Coast to come-from-behind victories.

He has emerged as a fan favourite at the Mariners not just for his attacking prowess but his jovial off-field character and charismatic interviews.

“Bang goals, win games,” Kuol told the Herald this year when asked about his ambitions for the season. “Don’t lose, hopefully. Get minutes. I try and focus on like one-year, two-year blocks. That’s how I judge things. Right now, same thing. I’m going to break it off in another two years, hopefully get a pro deal within the next two seasons and build on from there, and look overseas after that – another two seasons after that.”