Report and free match highlights as Mohamed Salah ends Liverpool’s home drought of 12 hours and 44 minutes without an open-play goal in the Premier League; Ollie Watkins scores his fourth goal of the season against Liverpool; Trent Alexander-Arnold fires home stunning winner for Liverpool 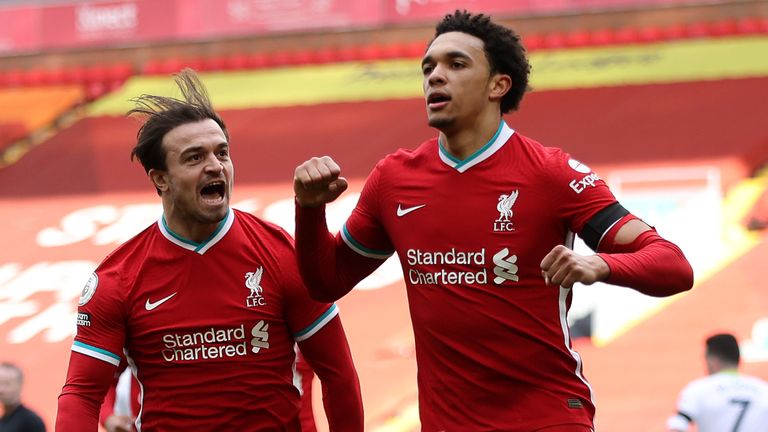 The first half played it in an achingly familiar fashion. Liverpool saw a plethora of chances but failed to take them, before Ollie Watkins (43) fired Aston Villa ahead, having now scored four goals against the Reds in the league this season.

Liverpool thought they had equalised with the last kick of the first half, but Roberto Firmino’s goal was ruled out for offside. Diogo Jota was the man penalised by VAR in another lengthy and extremely tight call.

But Mohamed Salah’s (57) tap-in early in the second half finally hauled Liverpool level and ended the Reds’ run of 12 hours and 44 minutes without an open-play goal at home in the Premier League.

Aston Villa came closest to scoring next when Trezeguet (62) hit the post, but much like the end of the first half, there was late drama to finally break Liverpool’s losing run. Alexander-Arnold curled home a sensational strike in injury time (90+1) – with England manager Gareth Southgate watching on from the stands.

The victory fires Liverpool into the top four ahead of West Ham and Chelsea, who both play live on Sky Sports this weekend. It will also give Jurgen Klopp’s side a huge boost ahead of their Champions League quarter-final second leg against Real Madrid on Wednesday.

For Aston Villa, they have been bumped down into 10th after Leeds’ win against Manchester City earlier on Saturday, but remain five points from Tottenham in seventh, which could be enough to secure European football next season.

Liverpool are back in Champions League action on Wednesday, already trailing Real Madrid 3-1 in their quarter-final tie ahead of the second leg. Liverpool will then be back on Sky Sports for Monday Night Football on April 19, facing Leeds; kick-off 8pm.

Aston Villa now have an 11 day break until their next game against Manchester City on Wednesday 21 April, live on Sky Sports; kick-off 8.15pm.