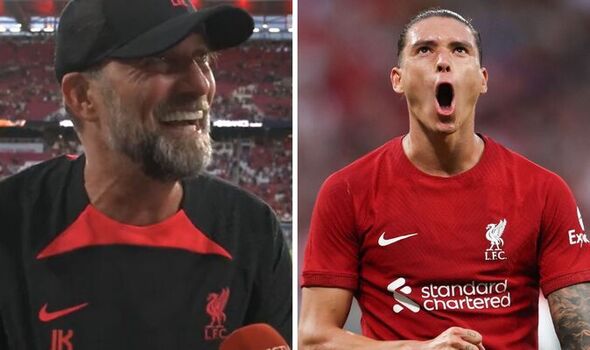 Liverpool boss Jurgen Klopp has joked that Mohamed Salah must have a clause in his new contract which stipulates that Darwin Nunez must take penalties. Nunez opened his Reds account against RB Leipzig on Thursday night after regular penalty taker Salah allowed him to take a second half spot kick after Luis Diaz had been fouled. Nunez went on to score another three goals as Liverpool ran out 5-0 winners.

“Mo, I’m not sure if it’s in his new contract with a clause or just being generous like hell – gives Darwin the penalty,” exclaimed Klopp after the match. “And Darwin – the box of pandora was opened. That’s of course the perfect night for him.”

Liverpool were in sensational form against their German opponents at the Red Bull Arena and took just eight minutes to find the back of the net as Salah finished calmly after running on to Roberto Firmino’s flick-on. The Bundesliga side then managed to contain the Reds’ potent attack for the rest of the first half – but Nunez came to life after the interval.