Jurgen Klopp admits Liverpool cannot afford to waste any more points if they are to make a late run into the top four – and has called on his players to ‘squeeze something out of this season’.

The Liverpool manager revealed that all of those who were on international duty have returned unscathed and are “ready to go” as he looks to rescue a Champions League berth for next season by finishing in the top four, starting with the trip to Arsenal on Saturday – live on Sky Sports.

It is quite the fall from grace from the Premier League champions, who led the table on 82 points after 29 games last season. Now, they sit seventh on 46 points after the same number of games – a drop of 36 points – but Klopp will look to use victories over RB Leipzig and Wolves before the recent hiatus as a springboard.

When asked if this feels like a ‘mini season’, the Liverpool boss told Sky Sports: “Yes, it must be for us. There’s a lot to go for. We’re not in the best position to fight for the Champions League spots but it’s clear we’ll fight for it and if not then for the other European spots.

“It’s our job and that’s what we want. We want to be as successful as possible. At the beginning of the season, we had different targets which is normal but we’re now here in our reality and the position is not as bad as it could’ve been so we’re going to try everything to squeeze something out of this season.

“There are other teams in better positions, so we have to make sure that we can chase them but whether that’s possible or not will be decided in the specific games, like on Saturday against Arsenal. We don’t have many points to waste anymore and a tough programme coming up. When you’re in the situation we’re in, you’ve not got a lot to lose as well so let’s go for it.”

The 1-0 win over Wolves has left Liverpool in seventh and five points adrift of Chelsea, who currently occupy the last Champions League qualification spot, and with an uphill battle to close the gap in the remaining nine matches.

Klopp has Roberto Firmino back from a knee problem but the form of Diogo Jota, who scored the winner at Molineux and found the net three times in two World Cup Qualifiers for Portugal, may keep him out of the side.

“Arsenal are a good team,” Klopp continued. “They’ve had good runs this season and other times when it’s not been going so well. But they have now found their way and Martin Odegaard is playing well.

“With [Granit] Xhaka and Tomas Partey in midfield, that’s a proper double six, they have a last line full of experience and full-backs with desire to go. They’re a good football team so we’re going to have to defend at the highest level.

“If we do that, then we can create and we can score. But we must again be the team that nobody wants to play against. I believe we can be that.” 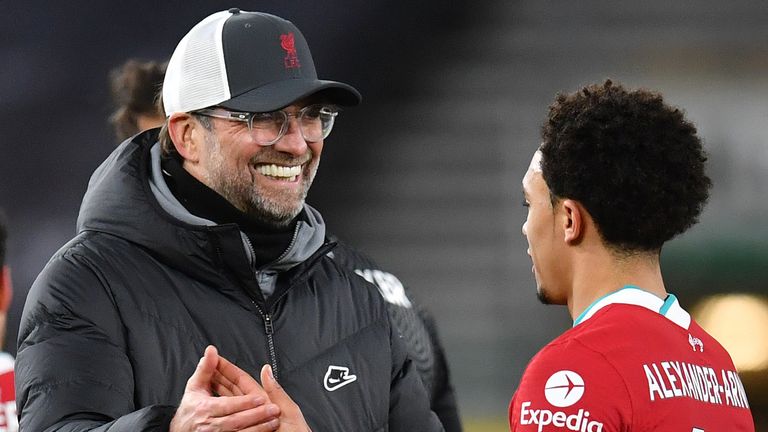 Klopp admits he was surprised by Trent Alexander-Arnold’s England omission and did not understand Gareth Southgate’s decision.

The 22-year-old, who has 12 senior caps, was left out of the World Cup Qualifiers against San Marino, Albania and Poland after Southgate said the right-back’s performance level had dropped from the standards of the last two years.

“He was in great shape here in training and he dealt with it very well,” Klopp told Sky Sports. “It wasn’t nice for him as you can imagine. I’m a manager myself so I make my decisions for my team for my own reasons and I respect that Gareth [Southgate] is doing that too.

“You can imagine a country who can leave Alexander-Arnold at home – they’re in a top place. I know there are good players out there and we don’t need to talk about the qualities of [Kyle] Walker, Reece James, [Aaron] Wan-Bissaka… England are blessed with a lot of talent.

“But none of these players, from my point of view, has the package like Trent. That’s my point of view. I’ve worked with him for nearly five and a half years as I brought him up pretty early and he’s developed every single day.

“When I heard that he wasn’t in the squad because perhaps he wasn’t as good this season as he has been in other seasons… the truth is that he was one of the stand-out players for us. He didn’t have a brilliant start to the season – that is true as well.

“But he had Covid and other issues that are normal with his age group, so I would’ve wished that there was a bit more faith in general in him. I didn’t see him being on the edge of whether he would be selected or not. I respect the decision of Gareth 100 per cent, but I didn’t understand it.”

Pitch to Post Preview: Jamie Redknapp on Arsenal v Liverpool; Plus how do Man City replace Aguero? And crunch time for Newcastle

In this week’s Pitch to Post Preview Podcast Sky Sports pundit Jamie Redknapp joins Peter Smith to look ahead to Saturday’s big clash between Arsenal and Liverpool. Could Jurgen Klopp’s side turn a frustrating season into a glorious one with a late top-four push and Champions League charge? Redknapp assesses their chances – and explains where they will have to strengthen in this summer’s transfer window.

We also hear from Sky Sports News’ Man City reporter Ben Ransom on life after Sergio Aguero at the Etihad Stadium and who Pep Guardiola and his recruitment team will target to replace the iconic Argentina ace.

Plus Sky Sports features writer Adam Bate examines Newcastle’s clash with Tottenham – two teams with lots still to play for during this run-in, and two managers who need a strong finish to the campaign.