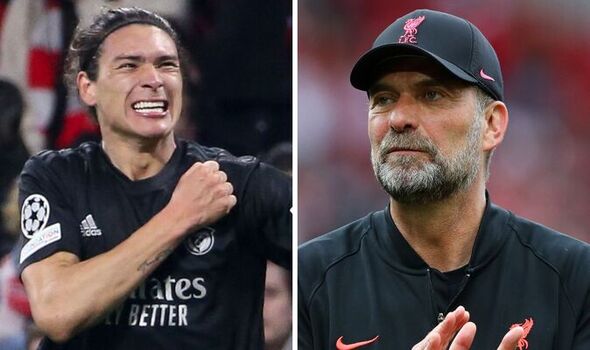 Liverpool appear reluctant to meet Benfica’s £85million asking price for Darwin Nunez, but three players heading for the exit door at Anfield can help fund nearly all of that fee. Sadio Mane’s decision to look for a move away from Liverpool this summer means Jurgen Klopp will want to bring in a replacement signing.

Bayern Munich are seemingly at the front of the queue to sign Mane, but have so far had two bids rejected by the Reds. Nunez is regarded as a potential replacement for the Senegal international, but he won’t come cheap.

Liverpool know full well the talents Nunez possesses after the 22-year-old scored in both legs of their Champions League quarter-final tie. And Klopp said at the time that he believes Nunez will have a “big career ahead of him”.

“Extremely good-looking boy and a decent player as well,” said the German. “Really good, really good, I have to say. I knew him before, of course, but he played pretty much in front of me with these tough battles with Ibou Konate. Physically strong, quick, was calm around his finish when he finished the goal off. Good, really good. Obviously how you say in these situations, if he stays healthy, it’s a big career ahead of him.”

Now it seems Liverpool’s interest is genuine in the Uruguayan forward, but the £85m asking price is currently proving a stumbling block. Whether Benfica can be budged on that huge fee remains to be seen, but it’s not beyond the realms of possibility for Liverpool.

The Reds are demanding £42.5m for Mane and it’s unlikely they will sell unless Bayern come close to that figure. Takumi Minamino has also been made available for a permanent move away from Anfield this summer with a host of clubs showing interest.

Liverpool reportedly want around £17m for the Japan international and he’s not short of options. And then there’s Alex Oxlade-Chamberlain, who has fallen down the pecking order under Klopp in recent years.

The 28-year-old started just nine Premier League games last season and featured just seven times in all competitions in 2022. Liverpool are said to be willing to take a loss on the £35m they paid for Oxlade-Chamberlain back in 2017 and want just £10m this summer.

If Liverpool get what they want for all three players, that would leave them needing to find just £15.5m to meet Benfica’s demands for Nunez. With the forward also said to be keen on a move to Liverpool over any other club, the Reds may also be able to negotiate down that figure.

No bid has supposedly been tabled as of yet though and things may begin moving quickly once Bayern start matching Liverpool’s price for Mane.