Liverpool defender Virgil van Dijk has tonight addressed supporters with a powerful statement after the club confirmed he will require knee surgery. The Dutchman has damaged his anterior cruciate ligament and will undergo an operation with hope that he can regain full fitness as soon as possible.

He was forced off after just ten minutes of the Merseyside derby following a reckless challenge from Jordan Pickford that went unpunished following a VAR review.

Van Dijk hobbled round the edge of the pitch before returning to the Liverpool dressing room in a mobile cabin in the car park.

Members of the Liverpool medical team then travelled with him to hospital to undergo a scan in order to establish the full extent of the damage.

The Reds confirmed fans’ worst fears in a statement on their website this evening but the Premier League champions are refusing to put a timeframe on his return. 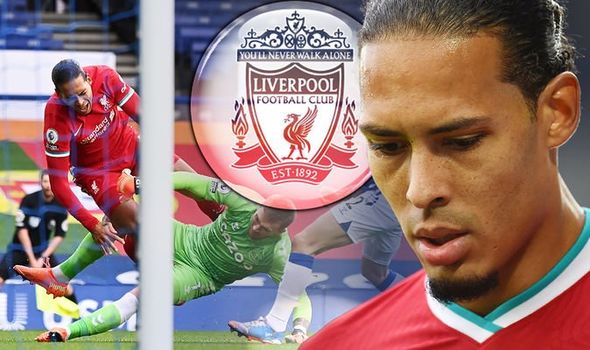 Now Van Dijk has vowed to return better than ever as he begins his long road to recovery. A statement on his Instagram read: “This afternoon I met with a leading consultant to start the process of planning the finer details of my rehabilitation following the incident yesterday.

“I’m now fully focused on my recovery and will do everything I can to be back as quickly as possible.

“Despite the obvious disappointment, I’m a firm believer that within difficulty lies opportunity and with God’s help I’m gong to make sure I return better, fitter and stronger than ever before.

“In football and in life, I believe everything happens for a reasoned it’s important to try and keep level headed whether going though the highs or the lows.

“With the support of my wife, kids, family and everyone at Liverpool, I’m ready for the challenge ahead.

“I’d like to thank everyone for the messages of supporter, it’s meant a huge amount to me and my family and I’ll now be doing everything possible to supporter my teammates in any way I can ahead of a big few weeks ahead as I take my own recovery day by day. I’ll be back. Virgil van Dijk.”

Former Liverpool defender Jamie Carragher believes the news could have a big impact on the Premier League title race.

The Reds decided not to replace Dejan Lovren following his summer switch to Zenit St Petersburg and now they have two recognised first-team centre-backs.

He told Sky Sports: “The big question you’re looking at now is, can Liverpool win the league without Van Dijk there? I think every team has three or four players in every title-winning team or a team who think they can win the title, and if one of those players is missing, no matter how good your manager is, no matter how big your squad is, you can’t cover for them because they’re outstanding.

“I think it blows the title race wide open, I really do.

“I still felt at the start of this season Liverpool were the team to beat. I think with Van Dijk being out for what looks like the whole season now, I think it’s going to be all on for Liverpool. I think Liverpool certainly have to go into the market in January, and not just because of Van Dijk’s injury, but Liverpool were weak in that area anyway. They lost (Dejan) Lovren before the start of the season now the other players in those positions are very injury prone.

“Yes, devastating news for Virgil van Dijk – we pass on our wishes and I’m sure everyone does around football – but I think for Liverpool, Jurgen Klopp and the club now, right away it’s who can they get in?

“I know the transfer window has just finished but they have to be ready on January 1 to bring someone in because they are really weak in that area and that could stop them going on to try to achieve what they want to achieve.”