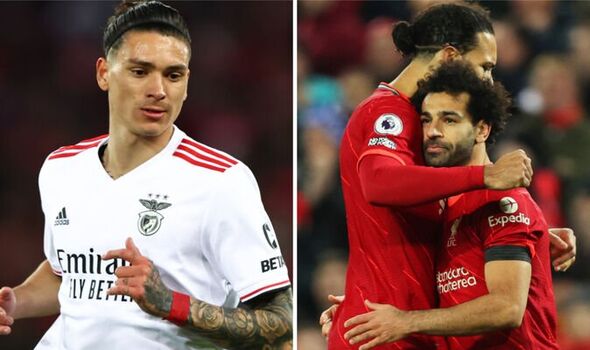 Both Mohamed Salah and Virgil van Dijk are admirers of Liverpool transfer target Darwin Nunez’s abilities. Nunez impressed against the Reds in the Champions League quarter-finals and scored in both legs as Benfica lost 6-4 on aggregate. And he could be Liverpool’s latest big-money recruit in the coming days with it claimed he has verbally agreed personal terms.

Nunez actually found the net twice at Anfield, both with fine finishes, but had one ruled out for offside. And the Uruguayan clearly left an impression on Liverpool boss Jurgen Klopp both that night and the week earlier in the first leg.

Klopp said of Nunez after Liverpool beat Benfica 3-1 in Portugal: “Extremely good looking boy, huh? And a decent player as well. Really good, really good. I knew before, of course, but he played pretty much in front of me with his tough battles with Ibrahima Konate. He was physically strong, quick, was calm around his finish. Good, really good. I always say in these situations if he is healthy, it’s a big career ahead of him.”

And now it looks as though Nunez is Anfield bound. The Athletic say he has agreed personal terms, though without actually signing a contract, and that discussions continue between the two clubs to strike an agreement. Reports in Portugal contrastingly claim Liverpool and Benfica have already shook hands on a package that could reach up to a club-record £85million.

Klopp was not the only individual left impressed by the 22-year-old back in April, who ended the season with 34 goals and four assists in 41 games. Portuguese outlet Record reported then that the centre-forward convinced Liverpool players in the first leg alone that he is a top talent.

It was claimed that members of Klopp’s squad spoke at length about Nunez after the match. And Salah reportedly had a conversation with Adel Taarabt in which he said he was impressed by the South American’s quality.

Talismanic centre-half Van Dijk, in conversation with Rio Ferdinand for BT Sport, also made it clear Nunez made a mark on him. Naming some of his toughest opponents, the Dutchman said: “[Erling] Haaland, also Darwin. He’s a bit similar, very direct and quick, tall and strong. It’s quite difficult to play against those guys.”

Liverpool may have to agree a club-record package with Benfica to sign Nunez, who is also admired by Manchester United who Express Sport understand had scouts at a good number of his matches last term. But clearly there is ample faith in the attacker.

To impress Salah and Van Dijk you have to have a certain level of talent. And while Nunez will be under pressure as the direct replacement for Sadio Mane, Liverpool’s superb recruitment history offers encouragement he can be the ideal addition to their front-line.

If he’s even half as good as the only previous Uruguayan striker – Luis Suarez – to play for Liverpool, he’ll be a massive success. Salah and Van Dijk may have plenty more to rave about when it comes to Nunez next season.