Manchester City moved ominously into the Premier League’s top five for the first time this season without having to be at their swashbuckling best against Newcastle.

After a stuttering start, Pep Guardiola’s pre-season favourites are beginning to hit their stride at the right time, uncharacteristically based on defensive solidity than crazy firepower at the other end.

On this occasion goals in each half from Ilkay Gundogan and Ferran Torres were enough for Steve Bruce’s side to know they would be returning to the north-east empty-handed. 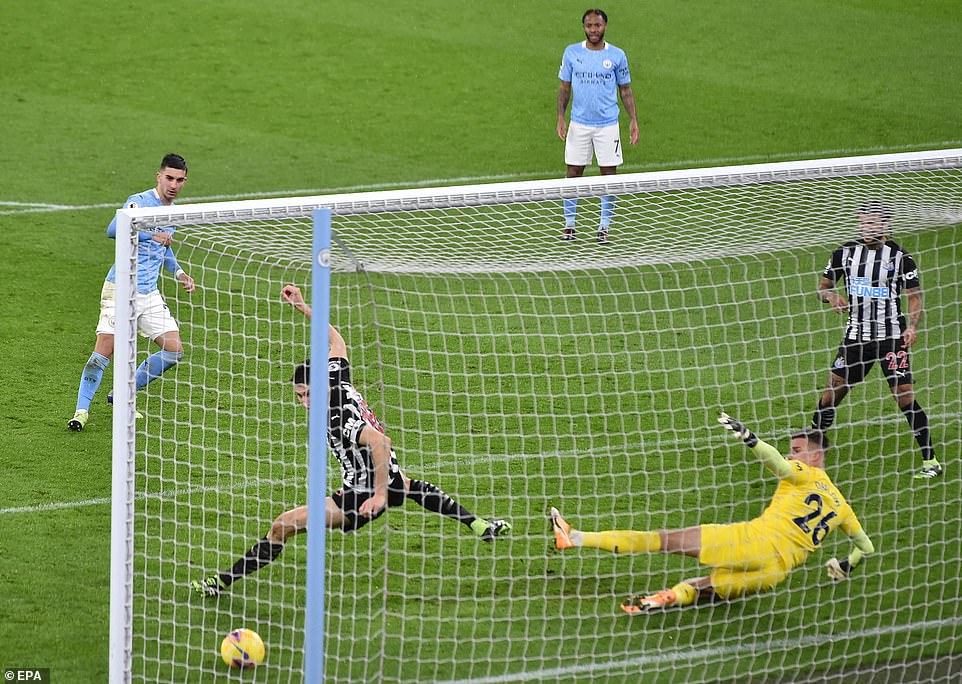 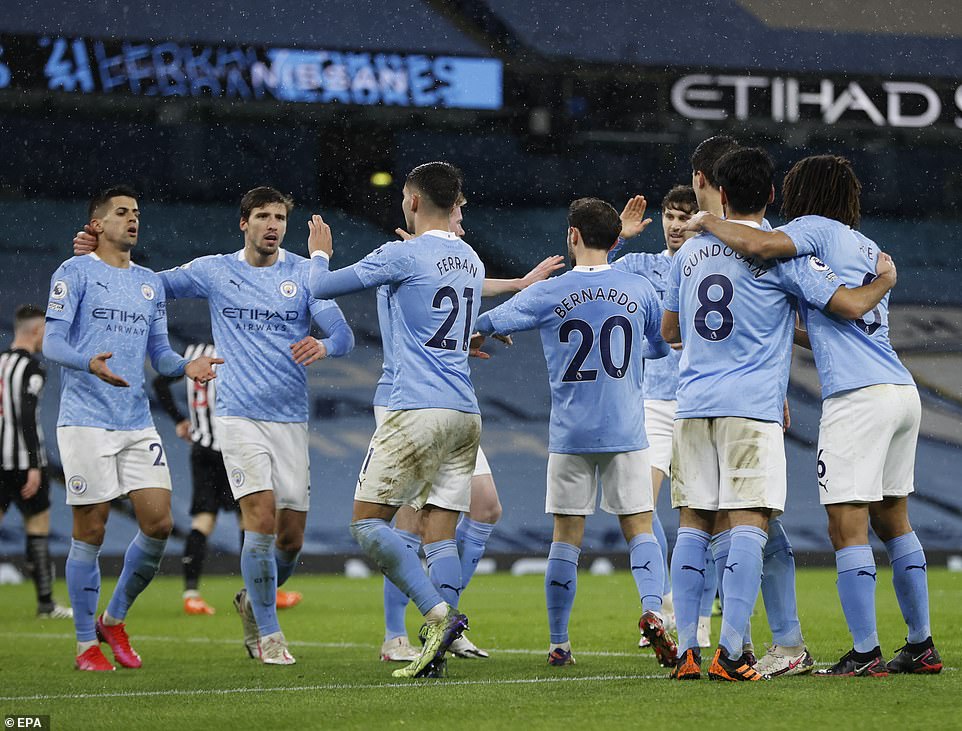 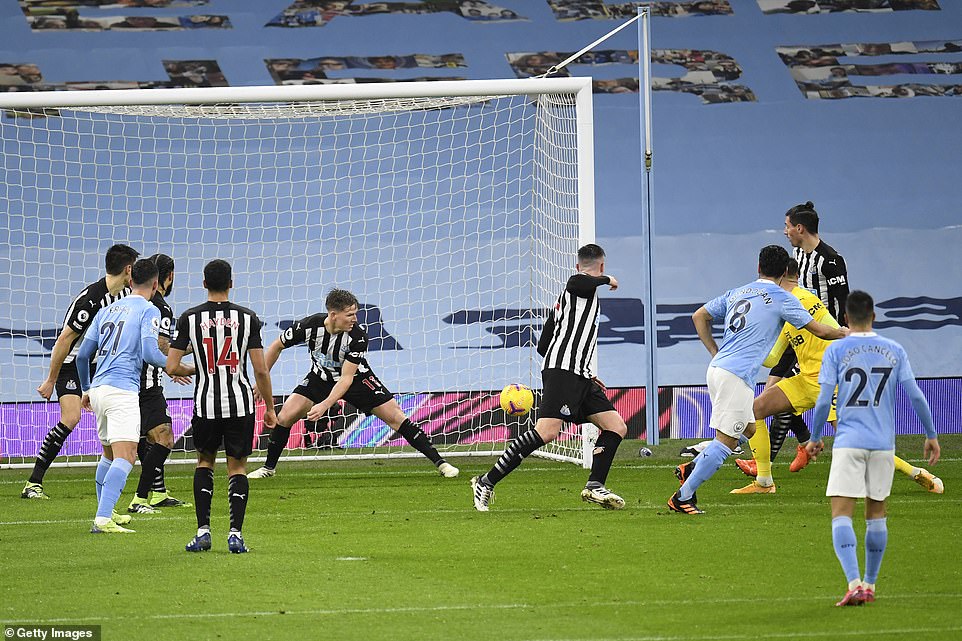 City were already unbeaten in nine and Guardiola named a strong side despite losing Kyle Walker and Gabriel Jesus who had turned in positive Coronavirus tests on Christmas Day.

Poor Newcastle know that story having been disrupted by the pandemic more than any other Premier League club. They were still without Jamaal Lascelles and Alain Saint-Maximin who have both struggled for weeks with the aftermath of long Covid.

Newcastle had lost their last 11 Premier League visits to The Etihad so it was little surprise Steve Bruce opted for caution in his line-up with three centre-halves starting and top scorer Callum Wilson on the bench.

The visitors tried to catch City cold in the opening minutes with a few high balls hoisted in towards Joelinton as rain poured down but it wasn’t long before the pattern was established with City dictating.

After six minutes, Rodri split the defence for Raheem Sterling to raid down the right and his cross required a brilliant clearance from Fabian Schar as City’s central striker Torres waited in the box.

There was nothing wrong with Newcastle’s spirit as they tried to harry and harass City at every opportunity.

But Guardiola’s men have such quality, the rearguard action lasted successfully for only 14 minutes.

Kevin De Bruyne pulled the strings to allow Joao Cancelo to give Sterling a run at Schar inside the penalty area. The England forward dribbled and then checked back leaving the defender on his backside.

Realising the angle was too tight for him to score, Sterling had composure to square across the six-yard box where Gundogan was on the same wavelength and slotted in right-footed.

It represented consecutive home goals for the German who had also netted against West Brom.

If City expected the early breakthrough to persuade Newcastle to show some adventure and chase an equaliser, they were mistaken.

As the contest clocked beyond 20 minutes, it showed 76% possession for the home side. The mobile De Bruyne fired in an intended cross that strayed goalwards and had Karl Darlow anxious backpedalling to turn over the bar.

The bellows of Newcastle boss Steve Bruce for his side to “get up, get up” reverberated around the empty stadium but may as well have fallen on deaf ears as far as his players were concerned camped inside their own half. 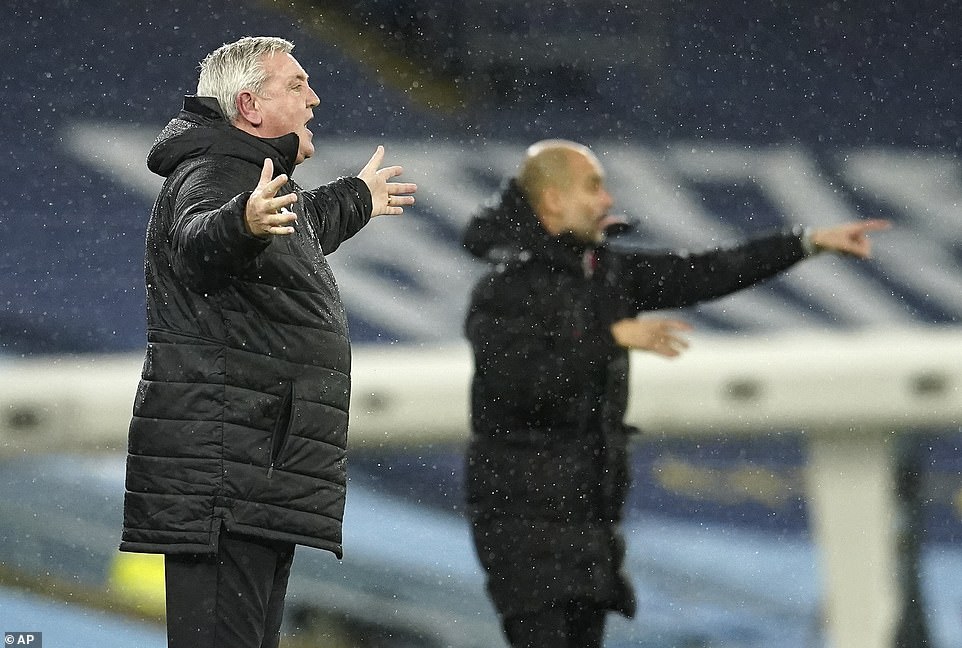 They seemed utterly unable to escape out and Ciaran Clark took one of the team when he inadvertently headbutted Ruben Dias as they challenged for an aerial cross inside the penalty area.

On a rare moment when Torres did find space, he fired straight at Darlow when either side would have produced a second goal. Shortly afterwards Rodri received a painful blow along the back of the leg after the combative Matt Ritchie ran into him.

For all Newcastle’s physicality, it was a City name first into referee Andre Marriner’s notebook. Rodri brought down Ciaran Clark with a tactical foul after 34 minutes to avoid a rare visitor’s break.

One of the strangest facts of this strange season is that De Bruyne hadn’t scored for City in open play with both his goals arriving via the penalty spot.

The drought should have been over when Torres released the Belgian in yards of space but De Bruyne didn’t look his usual confident self as Darlow bore down on him. The shot was blocked by Darlow’s left boot, rebounded back onto De Bruyne’s leg and rolled harmlessly wide. 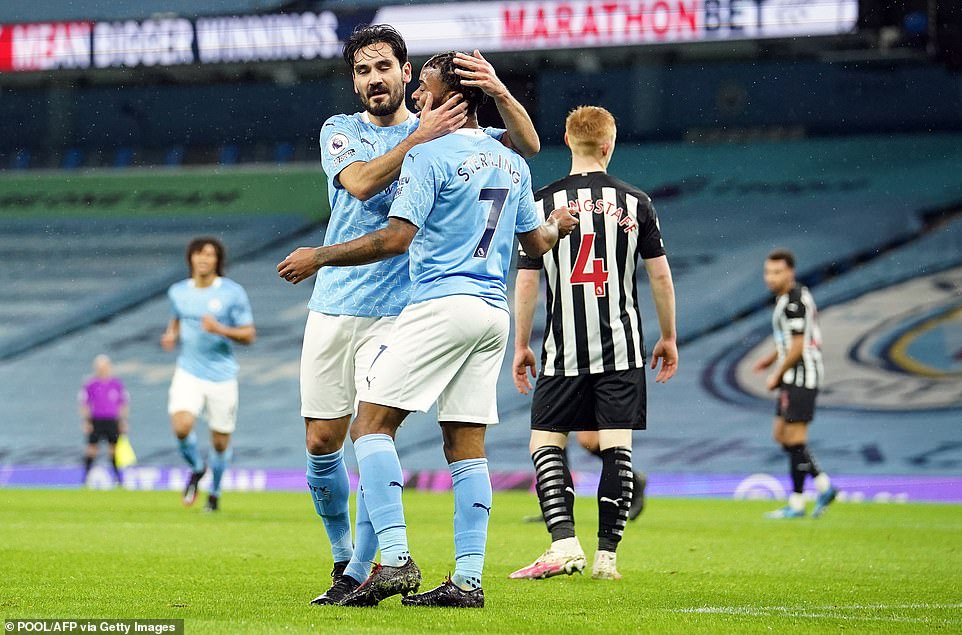 To Newcastle’s credit, they saved the best of the first half until last. They tried to use their height at set pieces and from one dangerous cross by Miguel Almiron, Clark was only inches from getting a decisive touch at the far post.

Sterling and Bernardo Silva swapped flanks for the second half and the Portuguese international looked more comfortable on the right.

He was fouled by Ritchie to give De Bruyne the opportunity to float a free-kick towards John Stones. The England defender should have scored but got his bearings wrong and ended up heading away from goal.

Newcastle forced Ederson into action after 52 minutes when a swift break by Jacob Murphy led to the winger’s shot held at the first attempt by City’s goalkeeper.

City made them pay with the important second goal after 55 minutes. Once again, right-back Joao Cancelo was a useful attacking outlet and when his low cross was intercepted by Toon captain Federico Fernandez the rebound fell nice to Torres who banged home from six yards. 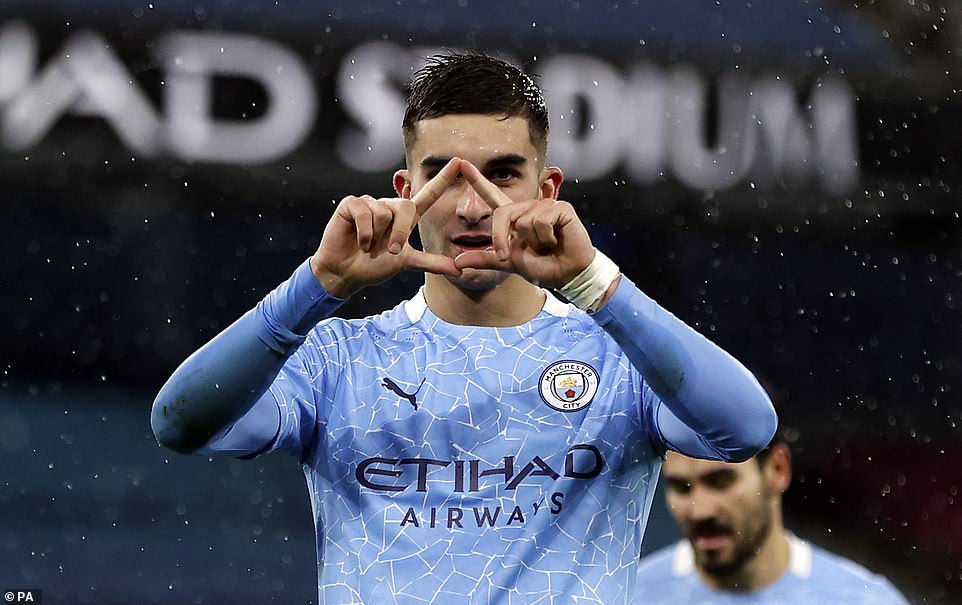 It was a seventh City goal for 20-year-old Torres who has made an impressive start to life in England following his move from Valencia in August.

With a tricky trip to Everton awaiting on Monday night, Guardiola almost immediately withdrew the already-booked Rodri to save him for Goodison with Fernandinho on as his replacement. Cancelo then nearly helped create a third for Bernardo who struck the post from four yards.

To emphasise the difference in squads, Guardiola was even able to give Sergio Aguero a late run-out from the bench as he continues his return from injury.